Hats Off To Larry 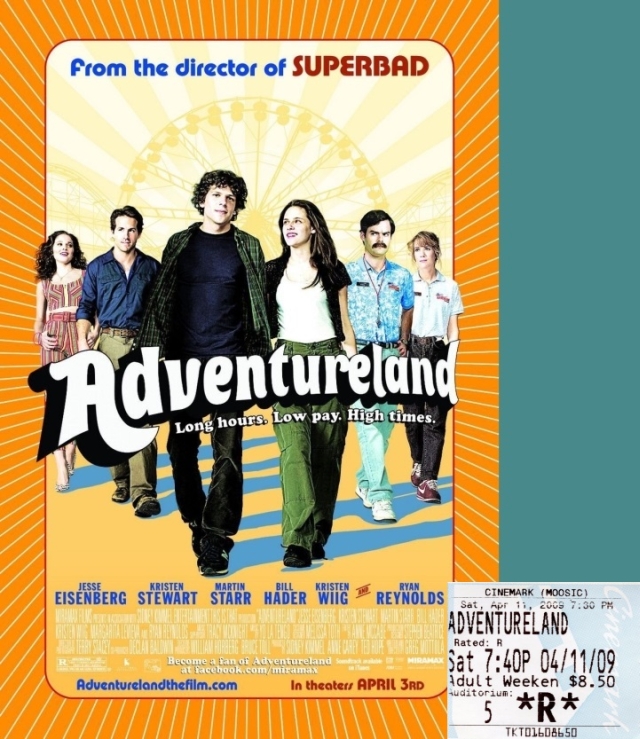 Adventureland (2009)
Cinemark - Moosic, PA
This is an absolutely brilliant film!  The story takes place in the summer of 1987 and is centered around James Brennan (Jesse Eisenberg), an aspiring writer who has just graduated from college and is looking forward to spend his summer vacation in Europe before moving on to grad school.  He learns at the last minute that his family won't be able to afford to cover his tuition, so he instead stays back at home (Pittsburgh) to live with his parents and save money by working with his childhood friend at a local amusement park called Adventureland.
This movie reminded me a lot of two other movies that I love: Dazed and Confused and Empire Records.  If you enjoyed those films, I'm pretty confident that you would love Adventureland too.  In fact, you could probably have one hell of a 70's / 80's / 90's triple feature.  Adventureland has a lot of genuine laughs with a fantastic soundtrack, but be forewarned that you will walk out of the theater with Rock Me Amadeus stuck in your head.  It also tells a great coming-of-age story with excellent performances by Jesse Eisenberg, Kristen Stewart and Ryan Reynolds that is easy to get lost in.