Seventh Ave In The Eighties 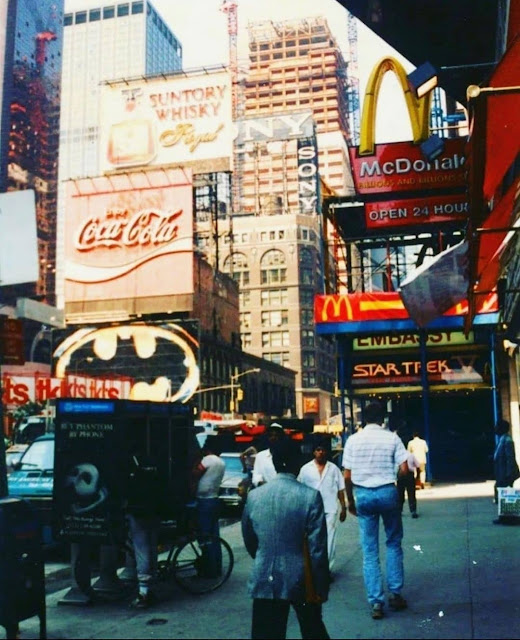 Seventh Avenue
New York, NY (June 1989)
I'm not sure who to credit as the source of this photo, but it perfectly captures the summer that I turned nine years old.  A massive advertisement for the first Tim Burton Batman movie can be seen under the Coca Cola sign, but it's not playing at the Embassy 1 Theater next to McDonald's, which leads me to believe that photo was taken before it was released on June 19th.  Instead, the theater was showing Star Trek V: The Final Frontier, which premiered on June 9th, so I'm guessing that this photo was snapped sometime in the ten days prior to the premier of Batman.
The Embassy Theater opened on August 26, 1925 and remained an operating theater for over 70 years until its closure in 1997.  It reopened a year later as the Times Square Visitors Center.  Thankfully, much of the interior has been preserved after 1987 when it was designated by the New York City Landmarks Preservation Commission.
The McDonald's is still in business today, but the location that it occupies was once a Weinerwald Austrian Restaurant at 1560 Broadway.  It can briefly be seen in the background during Ghostbusters when Louis Tully wanders through the city.  It closed not long after Ghostbusters was filmed and became a McDonald's soon thereafter.