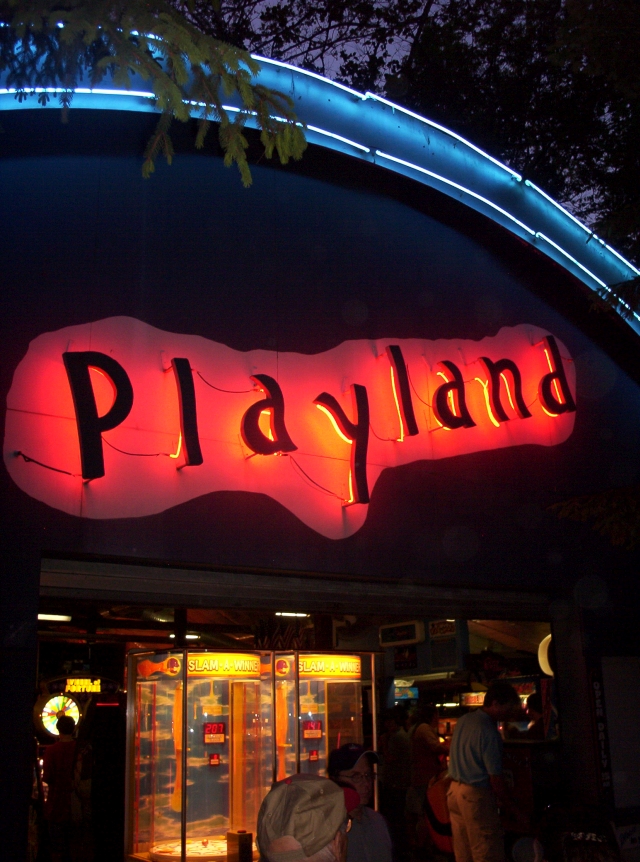 Playland Arcade
Knoebels Amusement Resort - Elysburg, PA
The arcade at Knoebels has a lot of novelty games that I rarely see anywhere else.  Here are a few of the more interesting ones that are currently in operation.

I have no idea who this is or why he is laying in this position with his foot in a bag, his hand in his pocket and a hat over his face, but this is one of my favorite photos that I've ever taken.

Artwork from the 1001 Nacht ride at Knoebels Amusement Resort in Elysburg, PA.  The ride was produced by Weber Maschinenbau in Bremen, West Germany in the early 80's.

Several of these rides are still in operation across the United States and Europe, including one in Hagen, Germany.

According to ThemeParkCritic.com: "The ride is named after the story of the 1001 Arabian Nights, a Sultan named Shahryar, and his forty wives. Shahryar had one of his headsman servants behead one of his forty wives. In searching for another to replace her, many more women lost their heads. Then Shahryar decided to select the headsmans' daughter, Shahrazad. In an attempt to keep her head Shahrazad told continuing stories to the Sultan for 1001 Nights. He was very pleased with her in the end because of her cleverness and intelligence. He spared her life and took her as his 40th wife. When you look at the ride you will notice some things. There are two statues on either end of the gondola: Shahrazad and her sister Dunyazad.  Also, the ride has 40 seats, each representing one of Shahryars 40 wives."

Since You Said Please... 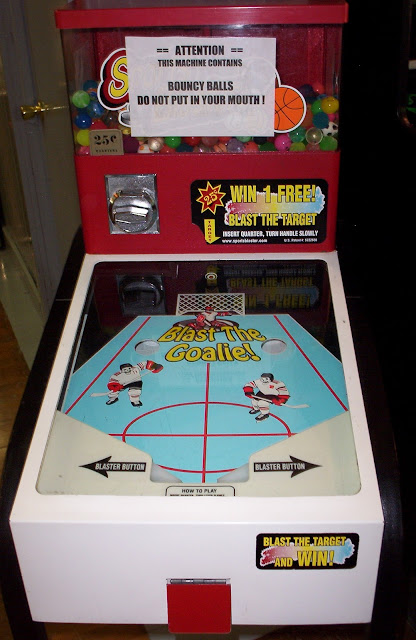 The Night That Honor Went Extreme 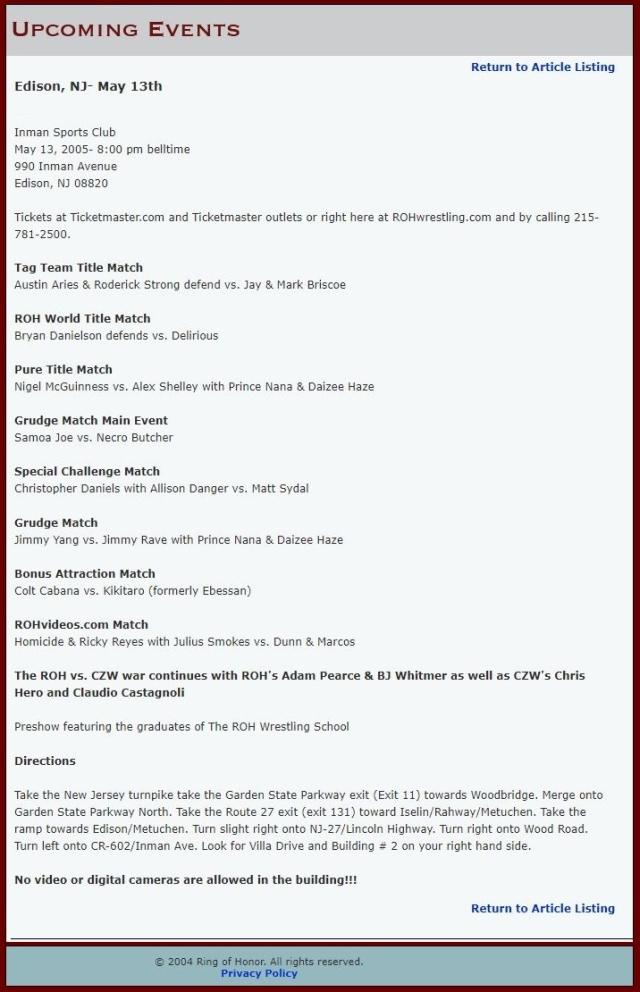 ROH: May 13, 2006
Inman Sports Club - Edison, NJ
I was stuck in traffic, so I missed the pre-show and just made it to my seat a few minutes before the end of the opening match between Colt Cabana and Kikutaro.  I felt even worse about being late when the show was over because I met Kikutaro and he was a hell of a nice guy. 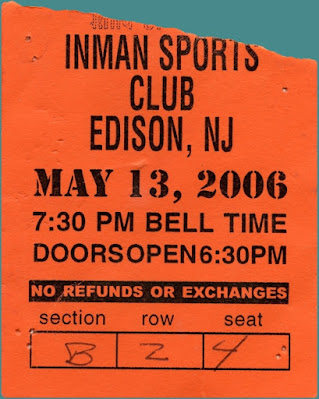 The story of the show began after the second match on the card.  Throughout the ROH vs CZW war, Homicide has remained neutral and refused to get involved.  After The Rottweilers defeated The Ring Crew Express, Adam Pearce came to the ring to ask for Homicide to join Team ROH in their battle with CZW.  Homicide dropped the mic without giving an answer.  Later in the night, the six man tag team match between Team ROH and Team CZW didn't even get started.  Necro Butcher and Samoa Joe each brought out a referee.  Necro knocked out the ROH ref, and Joe knocked out the CZW ref, and it turned into a six man brawl all over the building.  After about ten minutes of ECW level brawling, Homicide ran out to the ring to take on CZW.  The last two men standing were Homicide and Necro Butcher, which led to an unscheduled match between the two that ended with Homicide telling the crowd to throw their chairs into the ring on top of Necro Butcher.  I was in the second row, so I spent a lot of that time ducking and covering from getting smacked in the head by a chair that didn't make it all the way to the ring, but it looked to me like at least 50 chairs landed on top of Necro Butcher, with dozens of others landing around the ringside area (and in the first few rows around the area where my chair once sat).  Homicide dug Necro out from underneath the pile, hit a lariat and won the match via pinfall.  It was hands down the craziest thing I have ever witnessed at a live wrestling event.
In between Homicide's two appearances was an incredibly strong card that included a hard hitting Pure Title match between Nigel McGuinness and Jay Lethal (stepping in for Alex Shelley, who was scheduled for the match), an incredible rematch between Bryan Danielson and Delirious for the ROH World Title, and a solid 20 minute tag team title match between Generation Next and The Briscoe Brothers.  All together, this may be the best professional wrestling show I have ever seen.
Results:

After the show I bumped into some of the wrestlers, and they were all kind enough to take a photo with me.  I felt genuinely honored to meet Homicide after this show and take a photo with him.  He was definitely a star when he walked into the building that day, but he was a legend when he walked out.  That was a career-defining performance!
Update: This show was released on DVD under the title "Ring Of Homicide", which is a very appropriate name.  It's available for sale on ROHWrestling.com.  If you're interested in checking out an ROH show and you want to buy just one DVD to see what they're all about, I highly recommend this one. 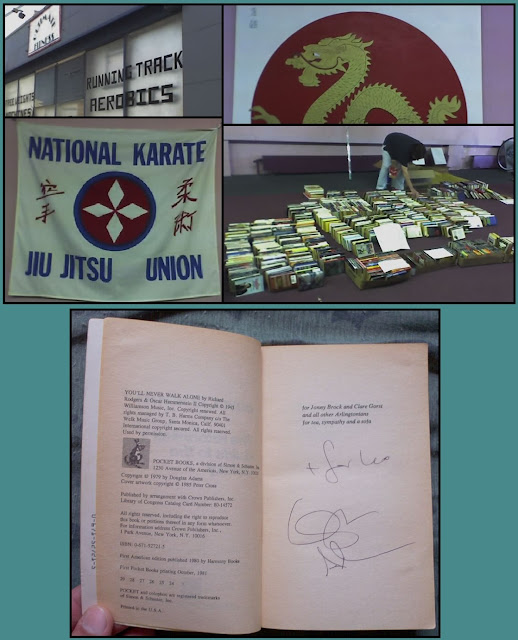 A gym in town had closed.  They took the opportunity to have a book sale as they were selling off all of their mats and equipment.  For $1, you could take all of the paperback books that you could fit into a plastic grocery bag.

We found a lot of classic sci-fi and movie novels, but the cream of the crop was a signed copy of The Hitchhiker's Guide to the Galaxy.