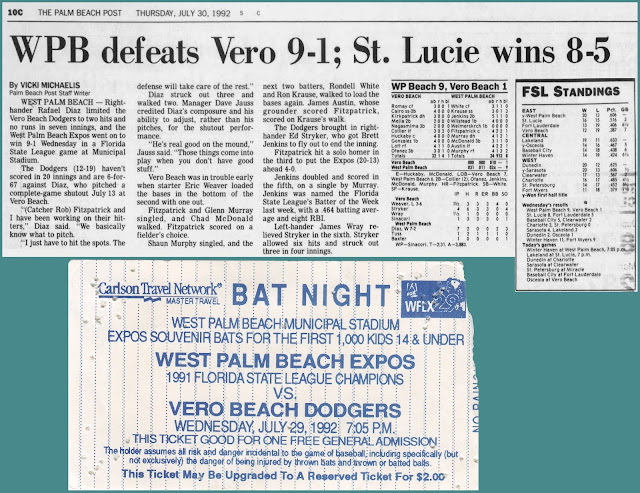 Notes: This was one of the best giveaway night I've ever been to.  The first 1,000 kids under the age of 14 (including a 12 year old me) were given a souvenir baseball bat.  However, this wasn't one of those miniature replica bats that you see in stadium gift shops.  It was a real, full-sized wooden baseball bat.  It was bright red and featured the Expos logo and the logo of the local Fox TV affiliate.  I still have mine.

I remember this game fondly as a fun night at the ballpark with my dad.  As usual, I spent a little time playing the pitching machine game.  The way it worked was that you would pay a few dollars and they would let you throw a baseball in a batting cage three times.  A display showed you how fast you pitched the first two balls.  You then had to guess how fast your third pitch would be before you threw it.  If you guessed correctly, you won a plastic replica baseball helmet of your choice of teams.

The Expos won 9 - 1 in a game that featured several players on both teams that went on to the major leagues.  West Palm Beach CF Rondell White went on to hit 198 HR and to play on the 2003 All-Star Team in a a 15 year MLB career with the Expos, Cubs, Yankees, Padres, Royals, Tigers and Twins.  DH Glenn Murray had a much shorter MLB career, but he did appear in 38 games for the Phillies in 1996.

In the visitors dugout, catcher Ken Huckaby would go on to play parts of six seasons in the big leagues for the Diamondbacks, Blue Jays, Rangers, Orioles and Red Sox.  Second baseman Roberto Mejia appeared in parts of four seasons in the mid to late 90's with the Rockies and Cardinals before ending his career with the independent El Paso Diablos in 2009.  The player who would go on to the most stardom from the Vero Beach Dodgers that night was shortstop Miguel Cairo.  Cairo went 0-4 that night against WPB Expos pitching, but he would have a 17 year MLB career with ten teams, including the 2009 National League Champion Philadelphia Phillies.