These days, it's not uncommon for a Spirit Halloween shop to temporarily take up residence in the vacant building of a store that had closed months or years earlier.  However, the Hazleton area had its own zombie retailer throughout the 90's.  It's called Ames Department Store.

Ames first appeared in Hazleton when they purchased the entire chain of 392 Zayre's stores in the United States in 1988.  They finally got around to converting the store in the Laurel Mall from Zayre's to Ames in November of 1989.
The rebranded Ames store in the Laurel Mall lasted less than five years.  They closed up shop in February, 1994 and were immediately replaced by K-Mart, which moved across town from their old location in downtown Hazleton to occupy the Laurel Mall anchor store.
I was living in Florida at the time, and by the time I came back to the Hazleton area in the mid 90's, I just assumed that the entire Ames chain went out of business.  However, they were still chugging along and would soon replace another failing department store in town.
Hills Department Store was the main store in the Valmont Plaza for roughly a ten year span from the mid 80's to the mid 90's.  I'm not exactly sure when it closed, but the building re-opened for business in the fall of 1999 as an Ames Department Store.
I didn't even know that Ames still existed at this point, but their acquisition of the Hills Department Store chain made them the fourth largest retailer in the United States (behind Wal-Mart, K-Mart and Target).

The second revival of Ames in Hazleton ended even faster than the first.  The Valmont Plaza location operated for less than a year and a half and closed its doors for the last time in February, 2001.  Within 18 months, the chain filed for Chapter 7 bankruptcy and closed all of its remaining stores.

The Last Ten Days Of K-Mart 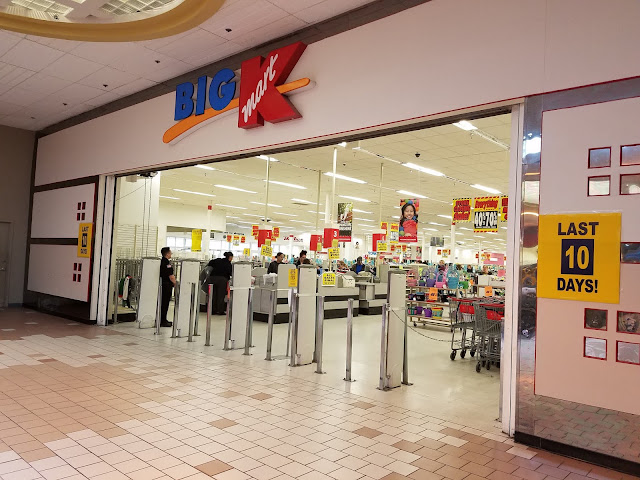 K-Mart
Laurel Mall - Hazleton, PA
When the Laurel Mall first opened in 1973, this was a Zayre Department Store.  Zayre was bought Ames in 1988, and by the end of the 80's, the store in the Laurel Mall was converted into an Ames.  That Ames store closed up in February 1994 and was replaced by K-Mart, which moved from their location in downtown Hazleton to the Laurel Mall.  After 24 years, K-Mart is closing its doors, and with no replacement lined up, this anchor store is going to be vacant for the first time since the Laurel Mall first opened.
I worked in the electronics department at this store in 1997.  In fact, for a very brief time, I was the department manager, but it didn't last.  I was only 17 years old at the time and the store manager only gave me the promotion to be spiteful to the guy that I replaced (he got sent to the Photo Lab).  It was a pretty crappy place to work, but it was sort of cool to work in an electronics department shortly after the launch of the Playstation, Saturn and Nintendo 64.
They've been selling off their merchandise and fixtures at pretty heavily discounted prices for the past few weeks.  The store has been picked pretty clean and is mostly a hollow shell at this point, but I wanted to get a few photos of what's left before they close up for good. 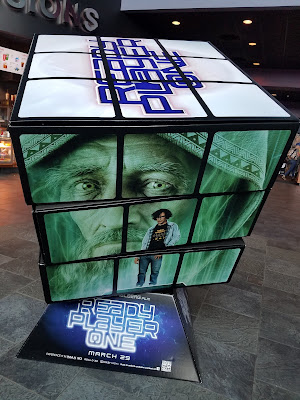 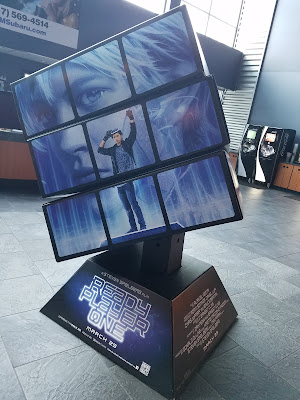 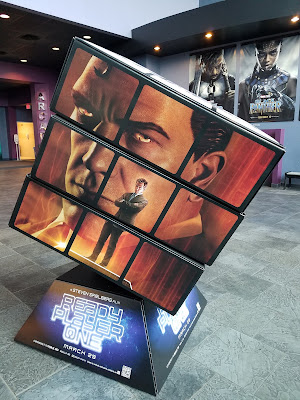 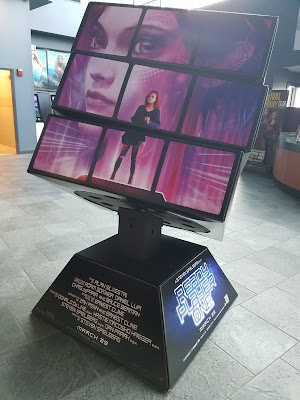 Ready Player One
Penn Cinema - Lancaster, PA
The lobby of the theater had this awesome Rubik's Cube display... or is this a Zemeckis Cube?  Well, whatever you call this, the movie is considerably different from the book, but it was very good.  I'm looking at it sort of as if it's a parallel universe from the novel. 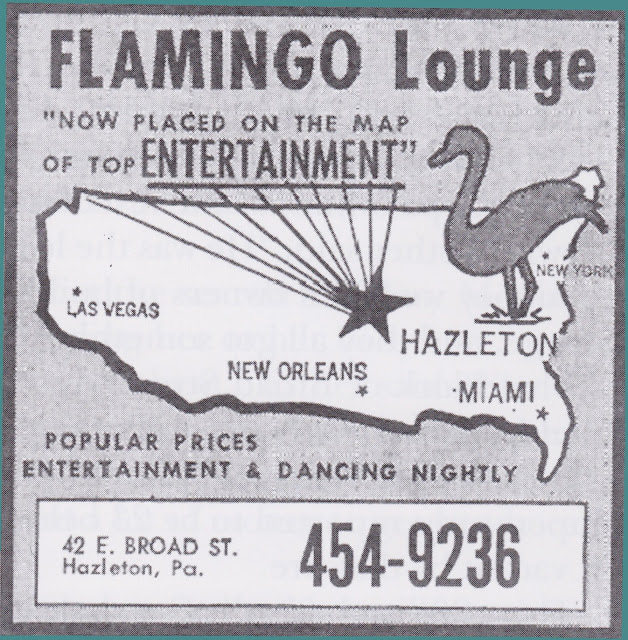 Flamingo Lounge
Hazleton, PA
This nightclub hosted some big names in the 1960's, but closed around 1970.  No word on whether the closing was related to their interesting cartography.  When you offer popular prices, I suppose you can get away with cutting off the state of Texas and shrinking Florida while curving it in the other direction.  I'm also not sure that New Orleans, Miami and NYC are quite so far inland.

Don't Judge A Book By Its Cover 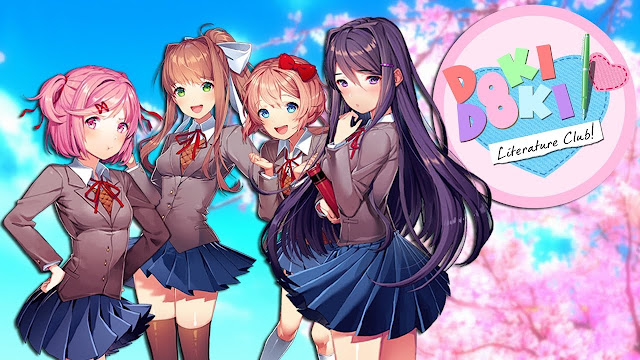 Doki Doki Literature Club
Developed by Team Salvato
Available on Steam
This game is totally free with no advertisements or pay content.  I've heard good things about it, so I figured I'd give it a shot.  It is definitely not what you're expecting based on the image above, and it's worth playing.


Concourse Dance Bar
1635 Market Street - Philadelphia PA, 19103
video by: PennLive.com
This dance bar opened just last month and I've wanted to go since I first learned about it.  No dress code, retro music, and alcoholic Ecto Cooler... it's enough to make this introvert break out of the shell for good. 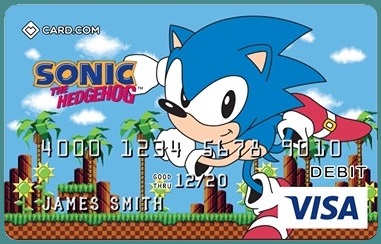 What's the current rate for exchanging Rupees for Chaos Emeralds? 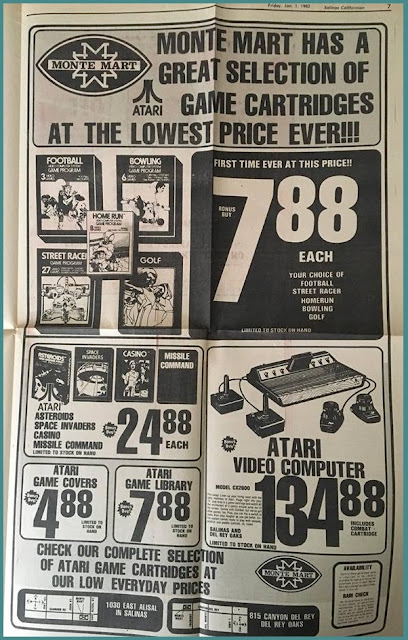 Monte Mart: 01/01/1983 newspaper ad
Atari 2600
David Calderon shared this ad from 35 years ago on AtariAge.  This was the dawn of the crash, and it's funny to see that all of the sports titles were heavily discounted while the arcade ports were almost $25.  I wonder what the Atari game covers were.

Gaze Into My Beverage 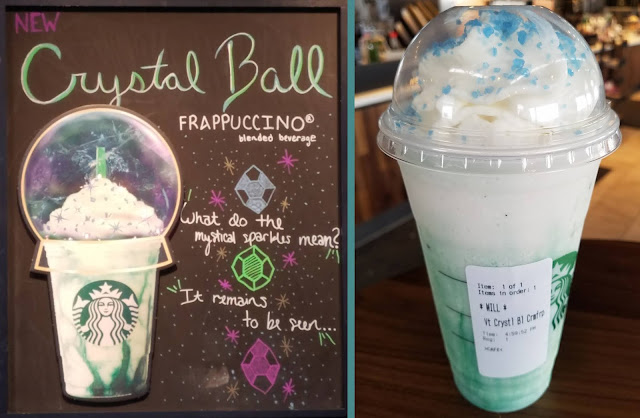 Crystal Ball Frappuccino
Starbucks (2018)
The new Crystal Ball Frappuccino from Starbucks is a creme-based beverage cut with peach flavoring and turquoise sprinkles.  It's topped with whipped cream and "mystical sparkles" that can be either blue, green or purple.  It's a cute idea, but it's not something I think I'll get again.  It was creamy and sweet, but I wasn't able to taste too much of the peach flavor. 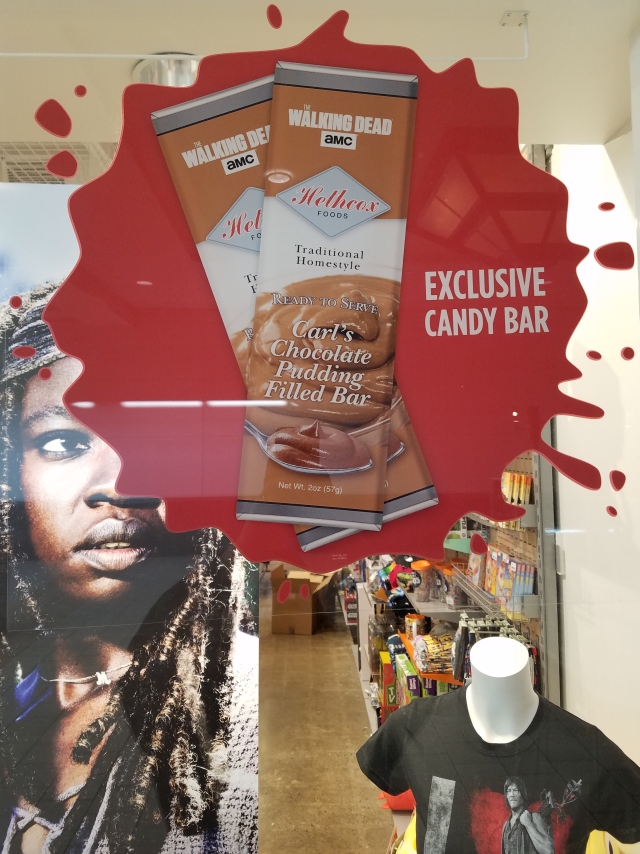 Carl's Chocolate Pudding Filled Bar
Astor Chocolate (2018)
This decal is on the window of FYE in the Wyoming Valley Mall in Wilkes-Barre, PA.  I didn't buy one (mostly because everything at this store is ridiculously overpriced), but they're selling candy bars based on the massive tub of pudding that Carl devoured in The Walking Dead.  They're branded as a Hethcox Foods product, but they're really made by Astor Chocolate (Hethcox is the fictitious company that made Carl's pudding in the show).

This June, Sonic will not only be selling pickle slushies, but they'll also be allowing guests to add pickle syrup to any other frozen dessert.  Not gonna lie, I will be trying a strawberry pickle milkshake this summer. 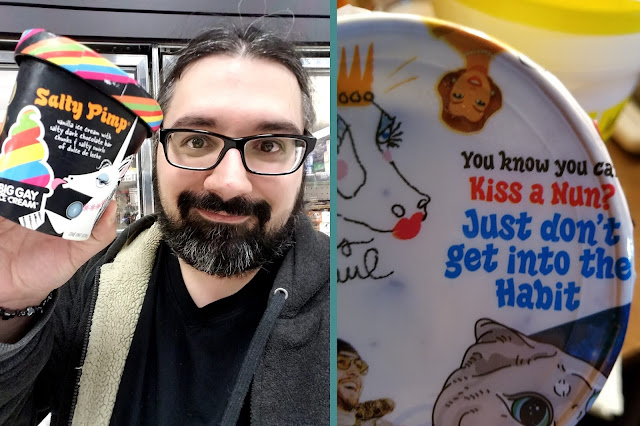 Big Gay Ice Cream: Salty Pimp
Market 32 - Edwardsville, PA
It's not often that a carton of ice cream advises me against undressing nuns.

On Top Of Old Hash Browns, All Covered With Cheese 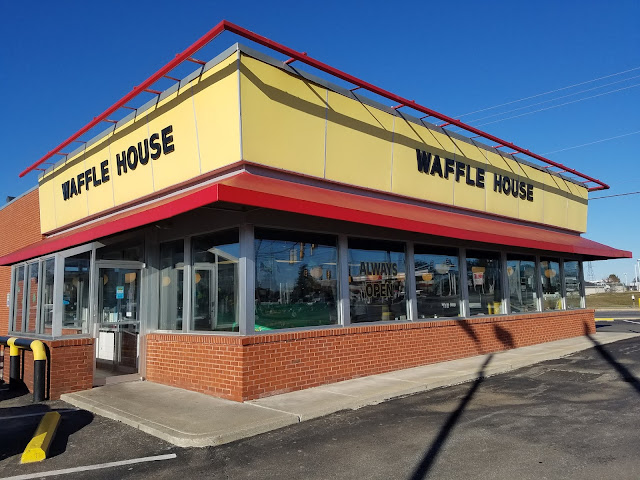 Waffle House
Lancaster, PA
I've heard people rave about Waffle House for years, but I've never had the opportunity to eat at one before yesterday.  Honestly, I'm not quite sure what the hype is about.  I wouldn't go so far as to call it disgusting, but it ranks somewhere between hospital food and the flavorless, pre-packaged sandwiches that you get from a vending machine at a rest stop.
The hash browns were especially disappointing - kind of like burnt, shredded cardboard.  I would have traded them for a McDonalds hash brown without a second thought.  They looked good on the menu though when I saw them.  You could even get them covered with cheese for 50 cents extra.  See for yourself.

Maybe this isn't a typical Waffle House experience, but I can't imagine I'd ever stop at one again unless I'm starving and it's literally the only thing open.

Indulging In The Ridiculous 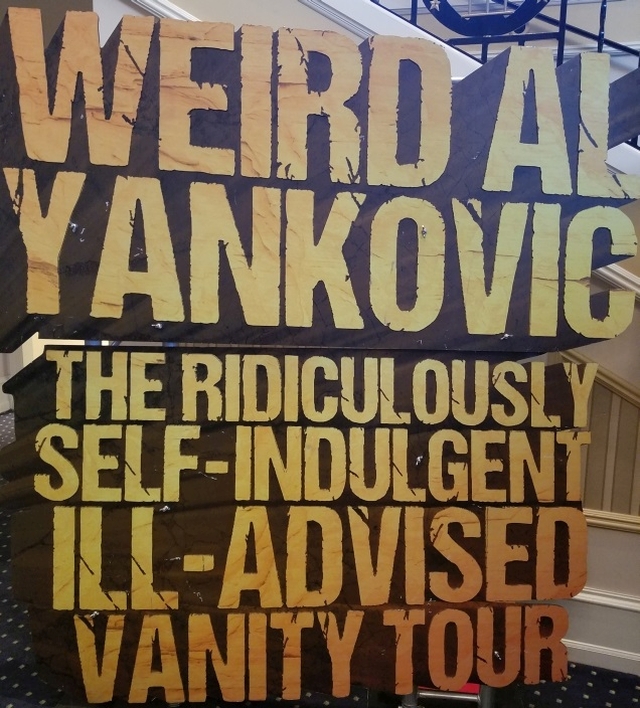 Weird Al Yankovic and Emo Philips
The Ridiculously Self-Indulgent, Ill-Advised Vanity Tour
American Music Theatre - Lancaster, PA
I've been a Weird Al fan for as long as I've known what music was.  One of the 45 records that was in the box that my mother gave to me before I had even started kindergarten included a Weird Al single for Eat It, with That Boy Could Dance as the B-side.  As I got older, I listened to more of his catalog.  I still remember swimming with my stepsister in her grandparent's pool and listening to her cousin's Weird Al cassettes.
The first of album of his that I bought for myself was Off The Deep End when I was 11 years old.  I played that cassette until the sound warped, and I thought the original songs, like Trigger Happy and I Was Only Kidding, were even funnier than the parodies that he's best known for.  Later on, when I bought his older albums on CD, I found the same thing.  I enjoyed the parodies, but I liked his non-parody comedy music even more.  When I learned that he was doing a tour that was largely centered around this part of his catalog, I knew I couldn't pass it up.
The show began with a performance from stand-up comedian Emo Philips, who was hysterically funny.  I know him mostly from his performance in UHF, but I've also heard a few of his albums and I enjoyed them very much.  He's a very talented and funny comedian with a unique style.  I'm very glad I got to see him. 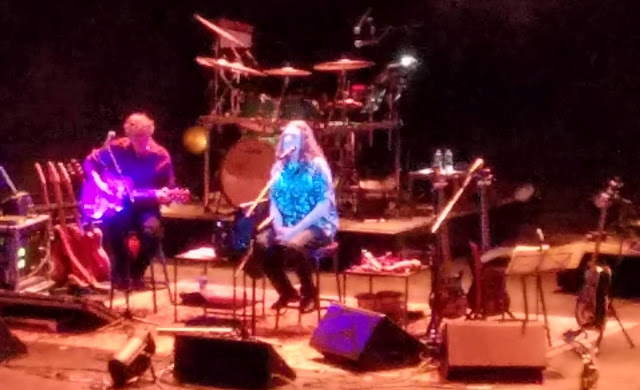 Weird Al concerts are known for their wacky, over-the-top presentation filled with video screens, props and multiple costume changes throughout the show.  In contrast, The Ridiculously Self-Indulgent, Ill-Advised Vanity Tour was advertised as informal and low key, taking cues from the stage setup of MTV Unplugged.  The show was exactly that, but it certainly wasn't as quiet as an Unplugged show.  He began with the You Don't Love Me Anymore, which is musically calm despite the zany lyrics.  After that, it was time to buckle up after that as he screamed his way through the 12 minute long insanity of Albuquerque.

He performed a medley of some of his best known parody songs at the end of the show (including Amish Paradise, complete with a shout out to Lancaster).  For an encore, he did a straight cover of Hello There by Cheap Trick before finishing the night with his epic American Pie/Star Wars mash up, The Saga Begins.  Aside from these three, all of the other songs he performed were original comedy songs that rarely get the attention they deserve.  It was a great show and a very fun night. 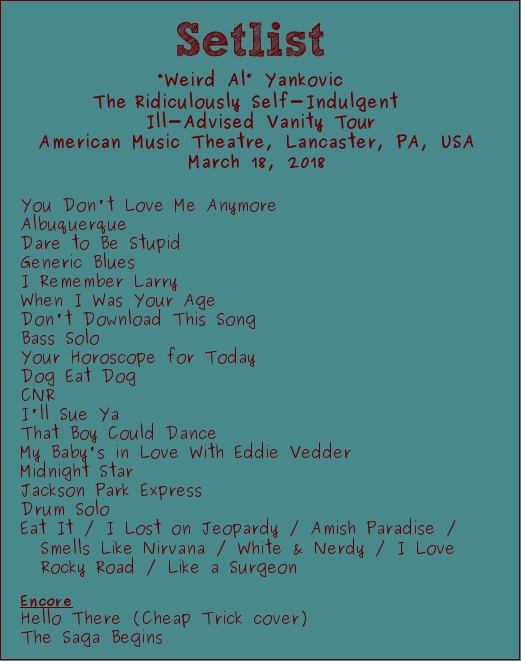 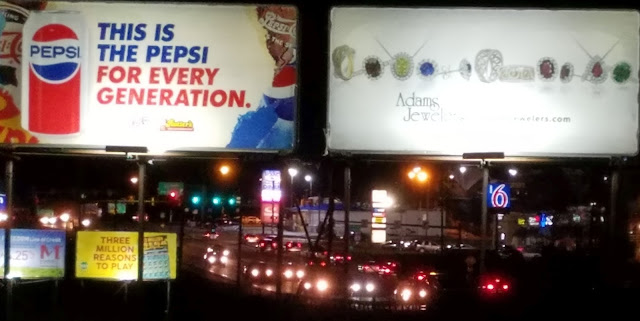 Pepsi seems to be going back to their 80's design.

The Mega Powers Live On 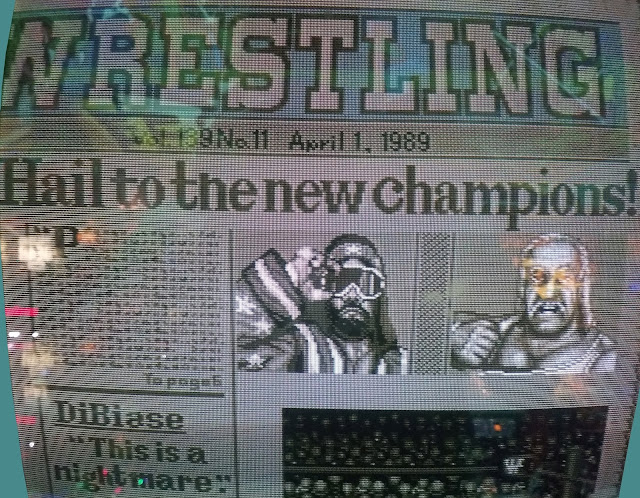 WWF Superstars
American Technos Inc. (1989)
It took me nearly thirty years, but I finally beat The Million Dollar Man and Andre The Giant on the WWF Superstars arcade game.  It would probably have cost about ten bucks in quarters if the games weren't all set to free play at the Timeline Arcade in York, but in a video game rematch of the 1988 Summerslam main event, the Mega Powers defeated the Mega Bucks to win the tag team championship. 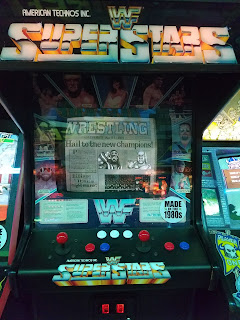 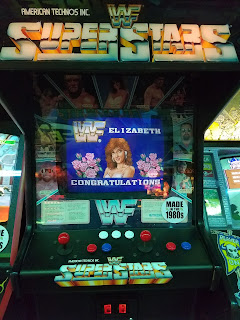 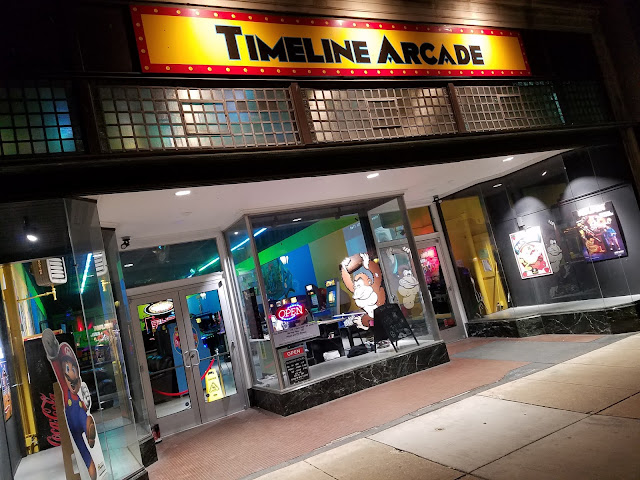 Timeline Arcade
Market Street - York, PA
I've been to the Timeline Arcade in Hanover a few times over the past year and a half.  I even got to meet Howard Scott Warshaw and Phil Moore there.  However, this was my first time checking out their arcade in the historic city of York, Pennsylvania.
If I had to pick one, I have to say that I prefer the atmosphere of the Timeline Arcade in Hanover, but in no way do I mean that as a slight to York.  This is a fantastic arcade where you easily spend a full day without spending a lot of money, and with plenty of games to play so that you'll never get bored.

If you enjoy playing retro arcade games and you're withing driving distance of York PA, you owe it to yourself to check this place out.  It's a treasure of vintage gaming.