Who Won This Trade?

Dickie Noles
1988 Topps - #768
Few photos have captured a moment in baseball as perfectly as the one that was used for this Dickie Noles card from the 1988 Topps set.
Dickie made his major league debut with the Phillies in 1979 and pitched out of the bullpen for the 1980 Phillies World Championship team.  At the end of the following season before he was traded to the Cubs.  He bounced around a bit in the mid 80's with the Rangers and Indians before returning to the Cubs as a free agent before the start of the 1987 season. 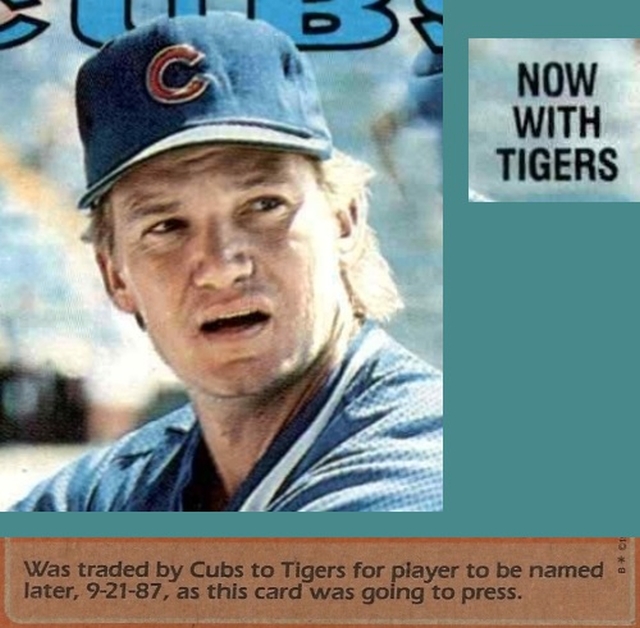 The Cubs traded Dickie Noles to the Detroit Tigers 20 years ago today.  The trade was took place with less than a month remaining in the 1987 season, and his 1988 Topps card was already in production at the time.  They were able to add a few lines to the front and back of the card at the last minute to indicate that the reliever was now a member of the Detroit Tigers.
Adding a "now with _____" line to the card of a player who has been traded late in the season was common practice for Topps at the time, and a player being traded for a "player to be named later" has been a routine occurrence throughout the history of the game.
A far less common occurrence is when a player is traded for himself, which is exactly what happened in 1987.  After the season was over, it was decided that the "player to be named later" who the Tigers would send to the Cubs in exchange for Dickie Noles would be... Dickie Noles.  It's a circumstance that has happened only four times in the history of the sport, but at no other time was the moment captured so perfectly on a baseball card, with the relief pitcher seemingly staring in disbelief at the announcement of his trade on the front of the card.
By the time collectors found this card, Dickie had moved on to the Baltimore Orioles.  He spent the '88 season in their organization, and the following year playing for the Columbus Clippers (then the Triple A affiliate of the Yankees) before returning to the Phillies in 1990 where he finished his career.