All The Super Heroes Is Come 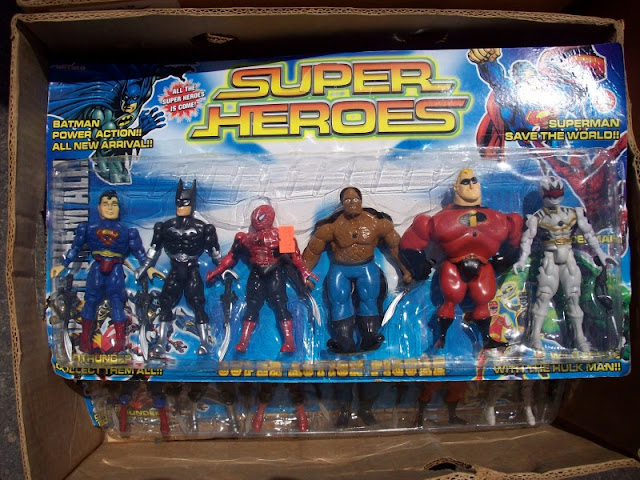 
Keystone Kapers 2 prototype
by Garry Kitchen (Activision)
One of my earliest memories from childhood was of a time that I threw a minor temper tantrum in the Boscov's department store at the Laurel Mall.  I couldn't have been older than five years old at the time,  We were shopping and I saw Keysone Kapers on the shelf.  It was one of my favorite games for the 2600, but the one at the store was in a shiny new 5200 box and it showed different graphics that weren't in the game that I had back home.  Dad patiently explained to an inconsolable young gamer that I already had this game, and that we didn't own a 5200.  This may have been the first time I wanted the latest port of one of my favorite games, but it wouldn't be the last.

AtariAge and the National Video Game Museum announced earlier today that the unfinished sequel to Keysone Kapers 2 has been discovered.  Activision programmer Dan Kitchen donated his brother's work to the museum, and some of the footage and facts about this lost game have been shared.  It was to be called Keysone Cannonball, and the video above shows Keystone Kelly presumably chasing Harry Hooligan to prevent a train heist.

If this news isn't cool enough, Dan shared on AtariAge that he is rewriting this game from scratch, and that a physical cartridge of this long lost game will be released by Tiki Vision Games.  He has a long history of fun games dating back to the dawn of the industry, including another of my Activision favorites, Crackpots.  I'm looking forward to playing this! 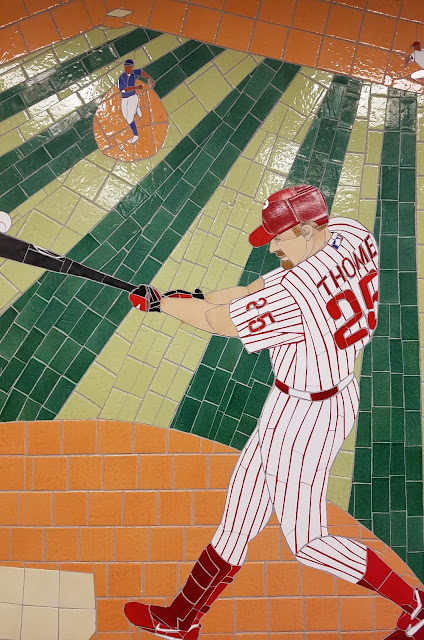 This mosaic by artist Jonathan Mandell hangs at Citizen's Bank Park to commemorate the Philadelphia Phillies career of one of the finest ballplayers of his generation.

I wrote a lot about him earlier this year when the Hall of Fame voting took place.  I could probably go on gushing about his accomplishments and the joy he has brought to me as a Phillies fan, and as a baseball fan in general, but I'll keep it brief.  Congratulations, Mr. Thome, on your induction to the National Baseball Hall of Fame.

Ode To The Fans 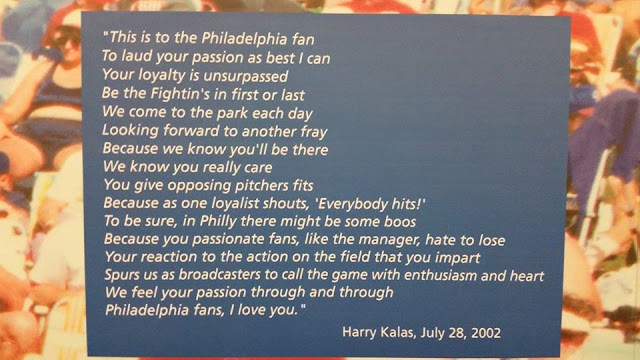 Ode To The Fans
Harry Kalas - July 28th, 2002
This is the poem that Harry Kalas wrote and shared with the public during his acceptance speech for the Ford C. Frick Award at the Baseball Hall of Fame in 2002.  His words of appreciation and love for the fans hang on the wall at Citizens Bank Park where I have no doubt they'll remain for as long as professional baseball is played in Philadelphia.

Blast Back With Mac 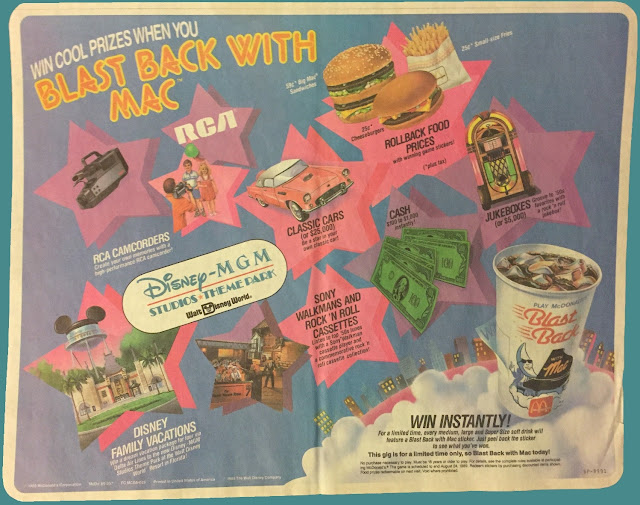 Blast Back With Mac tray liner
McDonalds (1989)
This was a 1950's themed promotion that McDonalds had in the summer of 1989.  Each large soda had a game piece that you could peel off for the chance to instantly win a prize, including "rollback prices" on food, a classic car, a jukebox and and a Walkman with a 50's rock mixtape.

Chris Has Been Busy 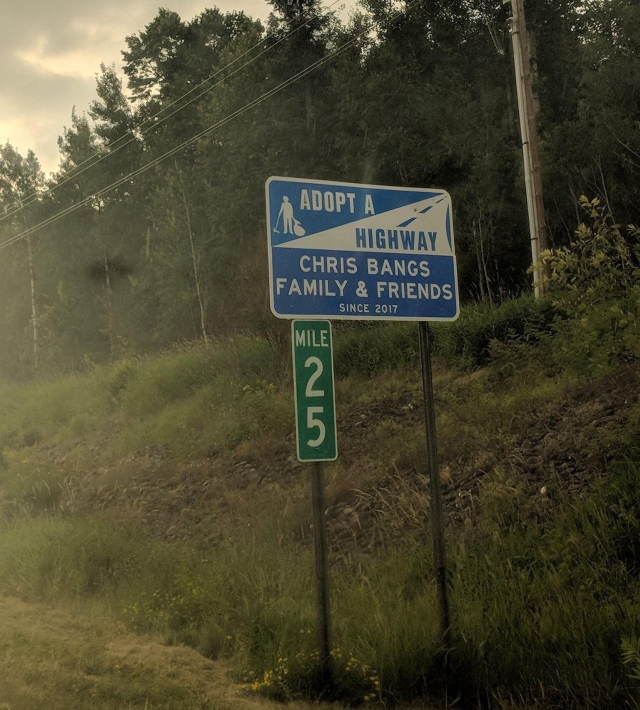 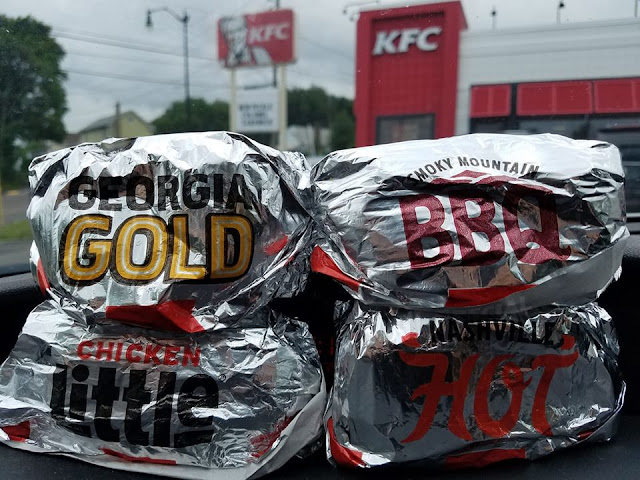 Chicken Little sandwiches
Kentucky Fried Chicken - Hazleton, PA
My grandfather used to take me up to Kentucky Fried Chicken for Chicken Littles when I was a kid.  Back then, they were 39 cents each, so we could get a big bag of them to bring home.  Today, they're nearly six times as expensive and they come in four flavors: original, Georgia Gold, Smoky Mountain Barbecue and Nashville Hot.  My favorite of the four is the Georgia Gold, which is made with a honey mustard sauce and pickles.  It sounds odd, but it's very good.

This is a concept that could make millions for many years to come if they capitalize on it.  They could come out with dozens of different regional and seasonal flavors to add to the menu.  Some could be available nationwide while others are like the Shamrock Shake and drive traffic into the store for a limited time at a certain time of year.  There's so many different ways to serve chicken that they could keep this going for years if they wanted to, and with a creative ad campaign, it would be almost guaranteed to be a hit. 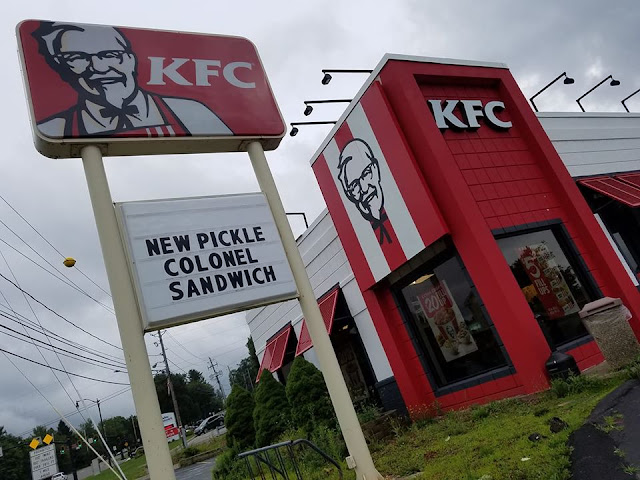 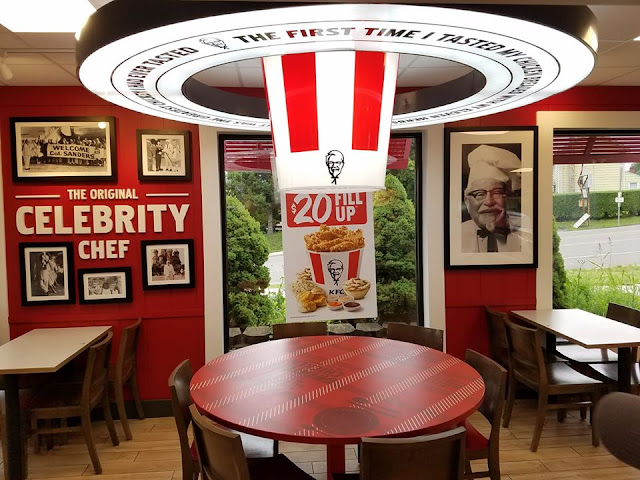 One last bit of KFC news.  They recently remodeled the dining room at the restaurant in Hazleton.  They played up the red and white color scheme, and they've redone the main lighting fixture on the ceiling.  I'm not sure if they were going for this, but it looks like a UFO is abducting the world's largest bucket of KFC straight off of the dinner table.  Hmm.. I wonder if the Colonel is an alien. 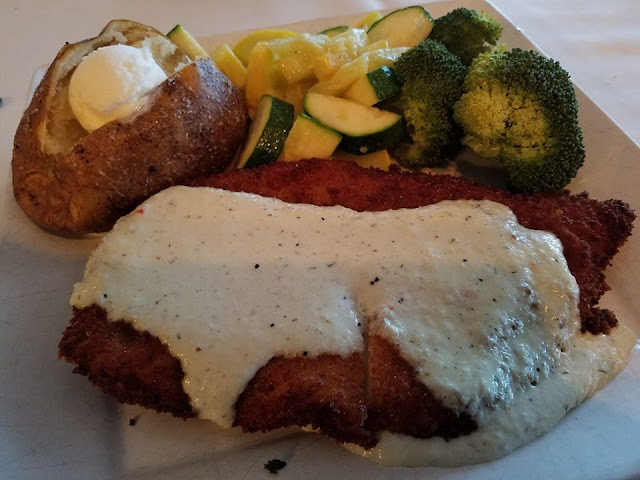 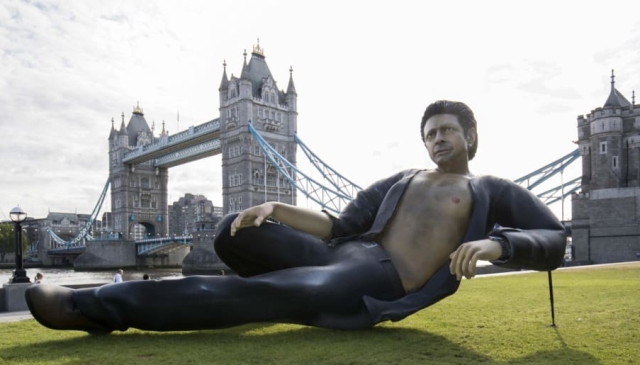 This giant statue of Jeff Goldblum in his post-dinosaur attack pose from Jurassic Park has popped up near the Tower Bridge in London.  It was put up by Now TV in celebration of the 25th anniversary of the release of the film.


Phillies vs. Padres (day game)
July 22, 2018
The Phils lost the day game 10 - 2, but the Phillies beer pirate makes everything a little better.

But I Have My Part In My Hand Now 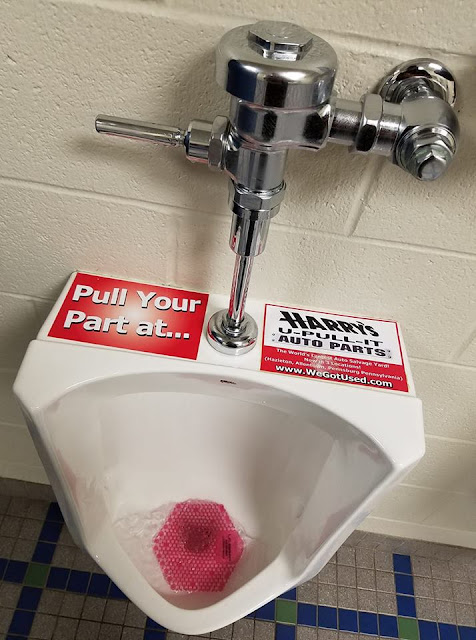 Harry's U-Pull-It advertisement
Mohegan Sun Arena (2018)
Maybe this isn't the ideal spot to start pulling my part.  Thanks for the etiquette tip, Harry. 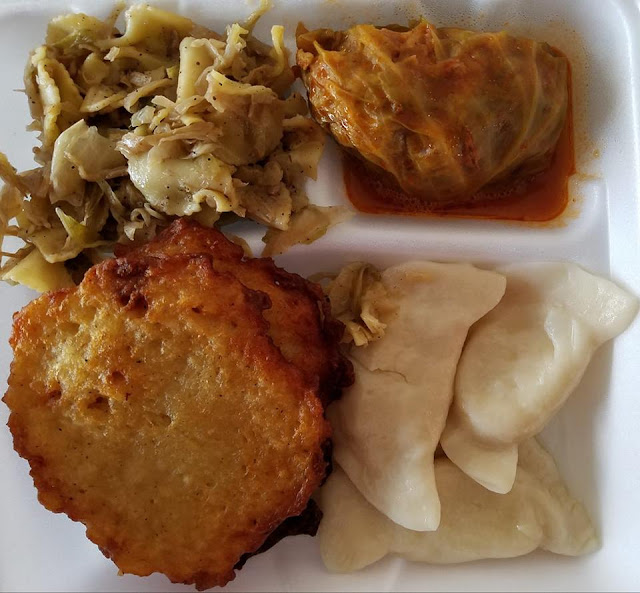 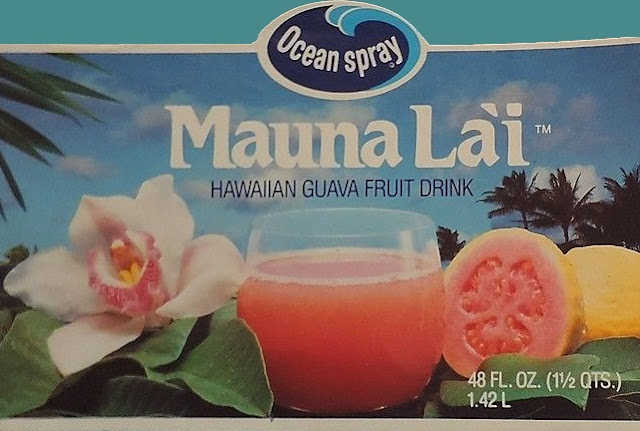 Mauna La'i
Ocean Spray
I used to love this stuff when I was a kid, but it was pretty expensive so we didn't get it too often.  I can't remember the last time that I saw it in stores.  An article from the New York Times from 2000 says that the product line was sold to Mott's, but their website makes no mention of it.

I Just Take As Much As You Can Throw 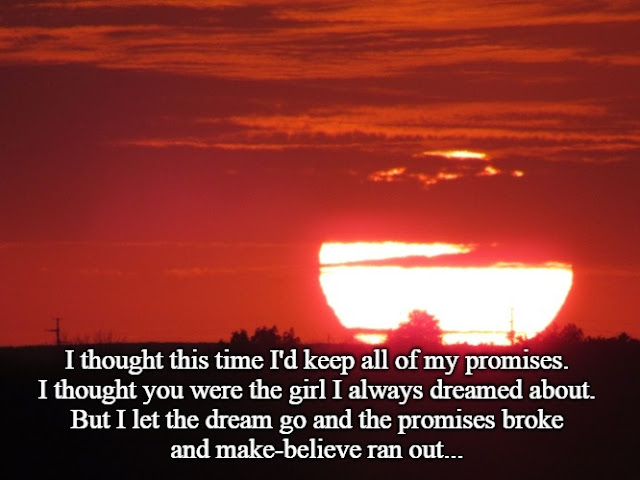 Smacked Down At Smackdown 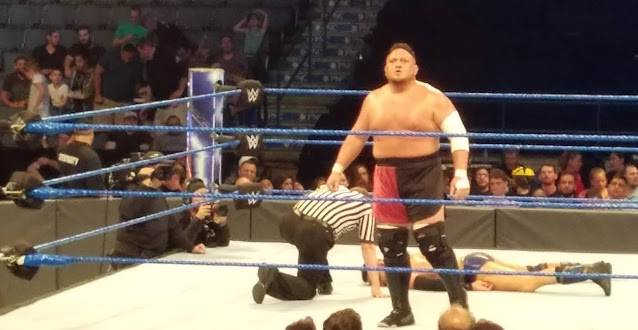 WWE Smackdown Live
Mohegan Sun Arena - Wilkes-Barre, PA
This seemed like a good show.  Honestly, I really couldn't relax and enjoy it, but it's not the wrestler's fault.  Long story.  I'll post a match list sometime later when I'm feeling more up to it. 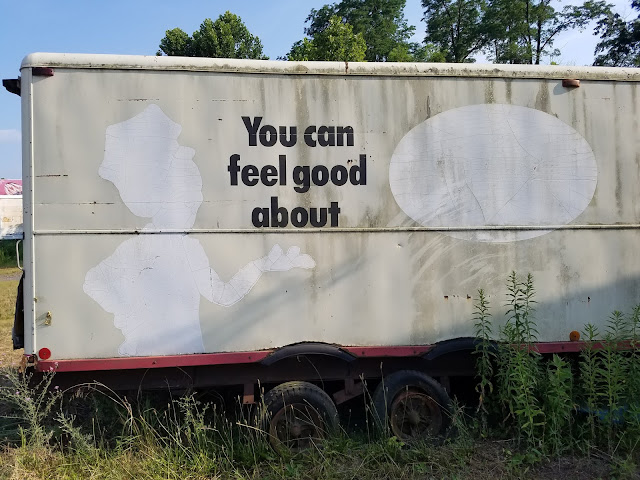 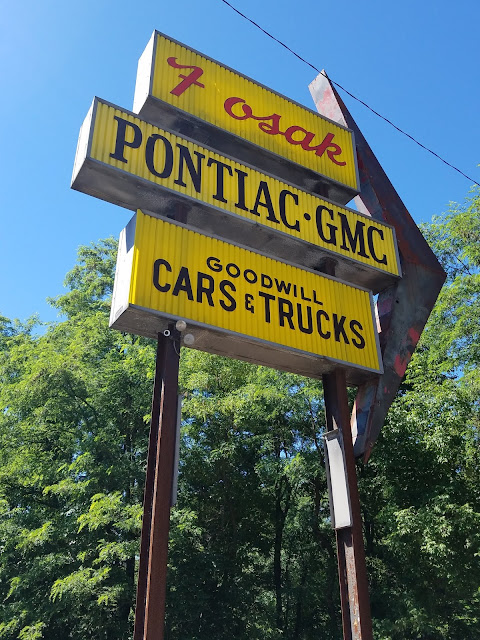 Hosak Pontiac GMC
Route 309 - Tamaqua, PA
I pass this sign on the way to the turnpike when we go to Philly.  It's across the street from All American Chrysler Dodge Jeep Ram, but it stands on a small empty lot with no other landmarks to suggest that cars were once sold here.  I'm not sure when it closed or what year the sign is from, but it's pretty old and it's still standing. 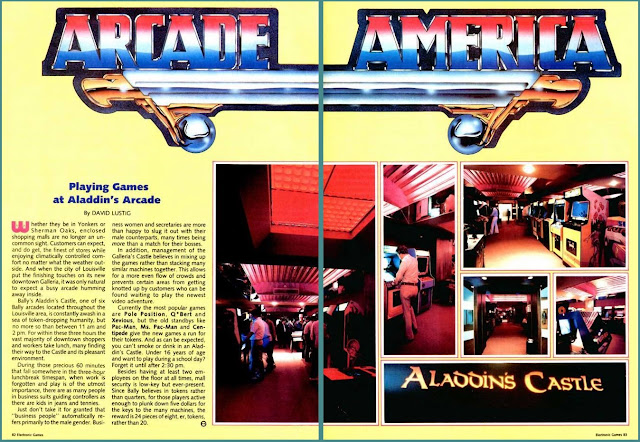 Another Schmidt In The Wall 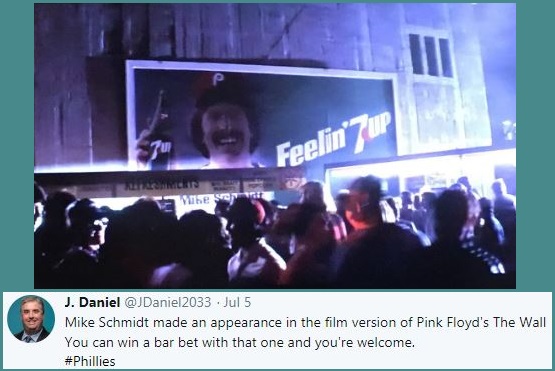