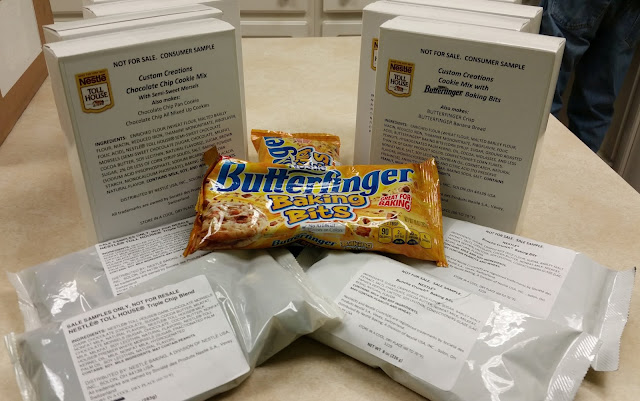 Butterfinger Baking Bits, Toll House Triple Chip Blend and Toll House Cookie Mixes
Nestle (2016)
It's always a good day in the test kitchen when we have new products to try.  These should be available in stores this summer. 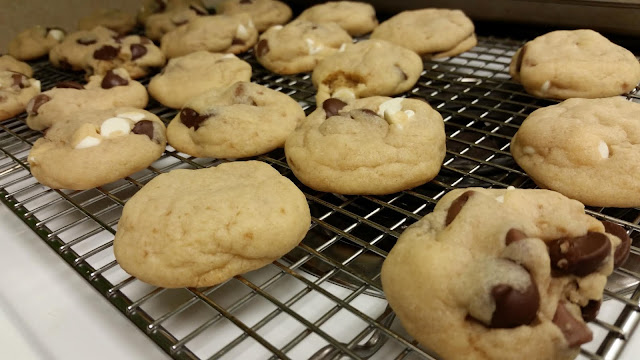 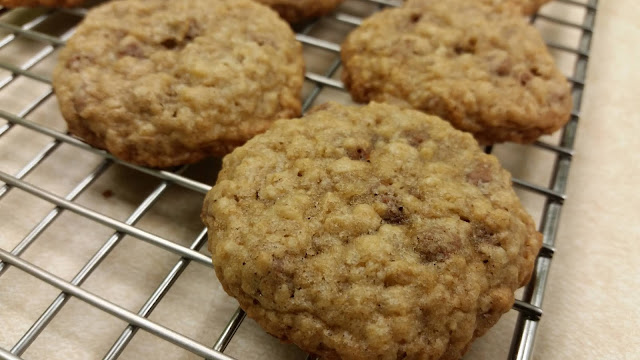 The Perfect Wave Surround Me 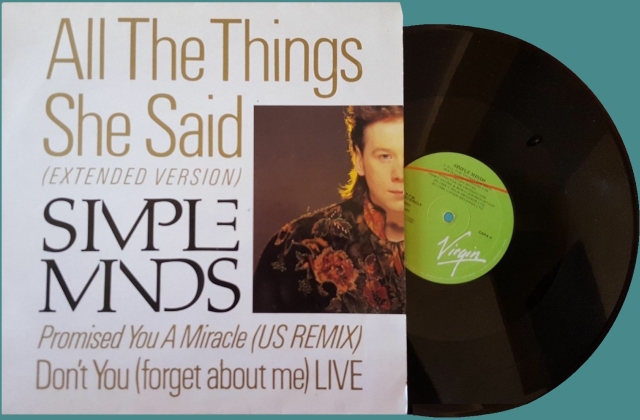 All The Things She Said
Simple Minds (1986)
Although New Wave was starting to cede its mainstream ground to Hair Metal by 1986, there was still a lot of excellent music in the genre that debuted in the second half of the decade.  Included among these was this Simple Minds song, which was released as a single thirty years ago this month.  It was the third single to be released from the band's 1985 album: Once Upon A Time (after Alive And Kicking and Sanctify Yourself). 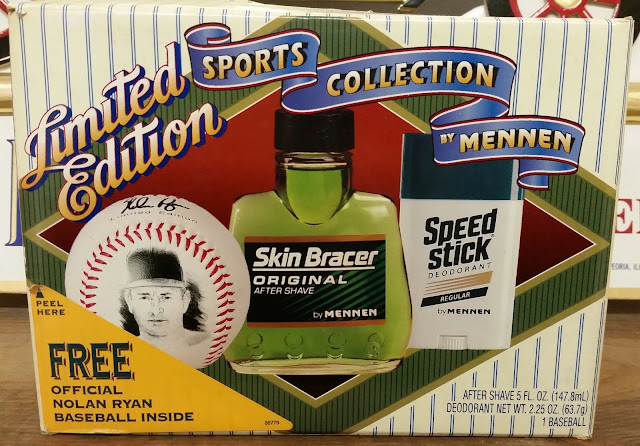 Black Diamond
Schuylkill Mall - Frackville, PA
I remember getting this gift set from my dad as a Christmas present when I was a kid.  I still have the Nolan Ryan baseball somewhere.  A vendor had the empty box for sale at Black Diamond.

The King at the Arcade 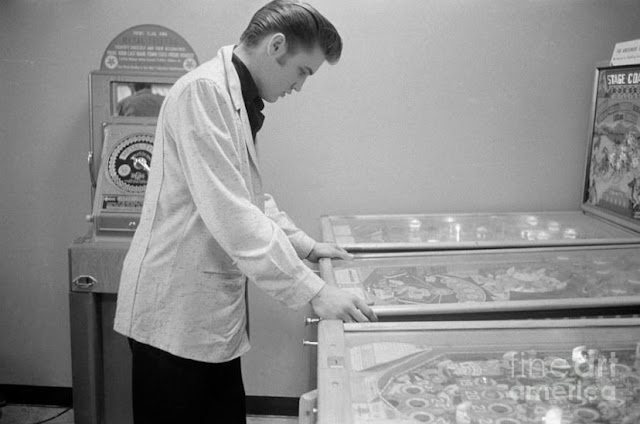 Elvis Presley Playing Pinball (1956)
The Harrington Collection
I'm not sure what machine The King is playing, but that's a Gottleib Stage Coach machine against the wall.  You can also see a Metal-Typer token machine over his shoulder.  They still have one of these in operation in the Playland Arcade at Knoebel's (coincidentally, it's right across from the pinball machines).

You can buy a print of this photo from Fine Art America. 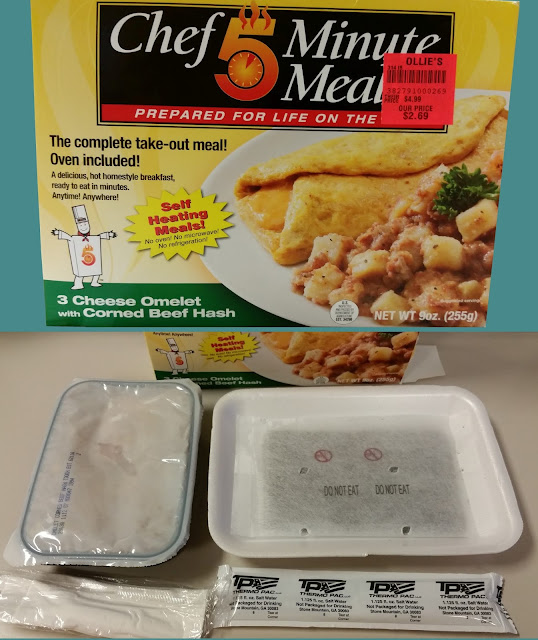 This is one of the more unusual grocery items I've bought and eaten.  It's a microwave meal that doesn't need a microwave.  The meal is in the sealed tray on the left.  To heat it, you open the tube of salt water and pour it in the tray on the packet that says "do not eat".  This sets off a chemical reaction that damn near boils the water.  Put the food tray on top of it and it heats the food in about five minutes.

When I saw the box, I didn't expect that it would heat it up much, but this thing got steaming hot - too hot to eat without blowing on it.  The eggs and the corned beef hash aren't going to win any culinary awards, but they were edible, and the product definitely lives up to the promise of being a self-heating meal.

I've Got A Heart On 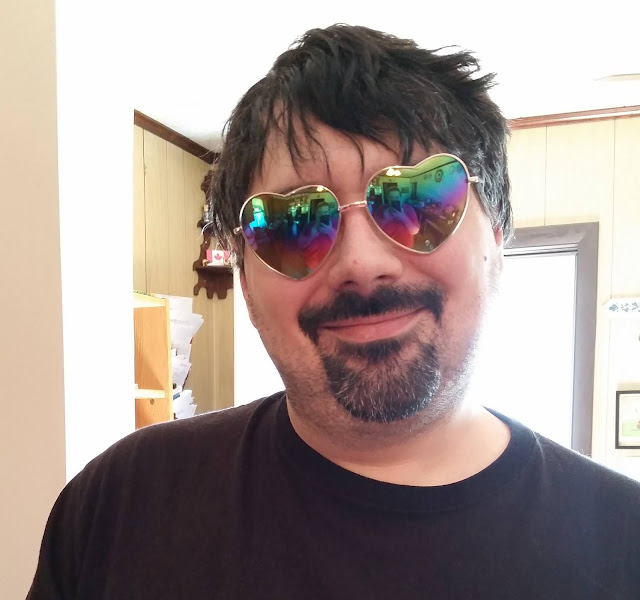 I wonder if they'd let me wear these for my drivers license photo. 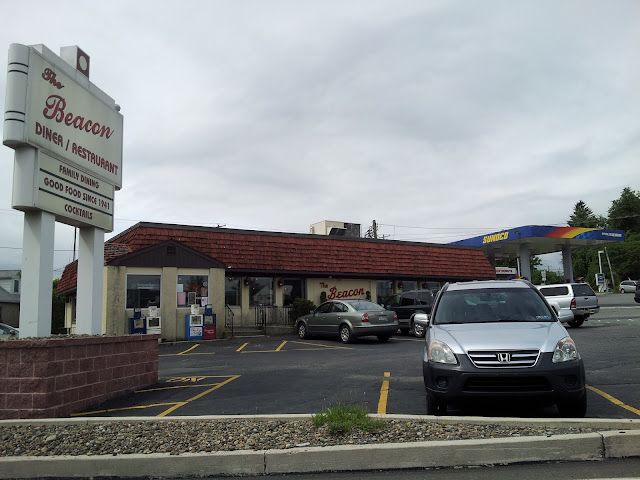 The Beacon
Route 309 - Tamaqua, PA
If you're not too full after leaving the Hometown Farmers Market, The Beacon is a pretty nice place to stop for a bite to eat. 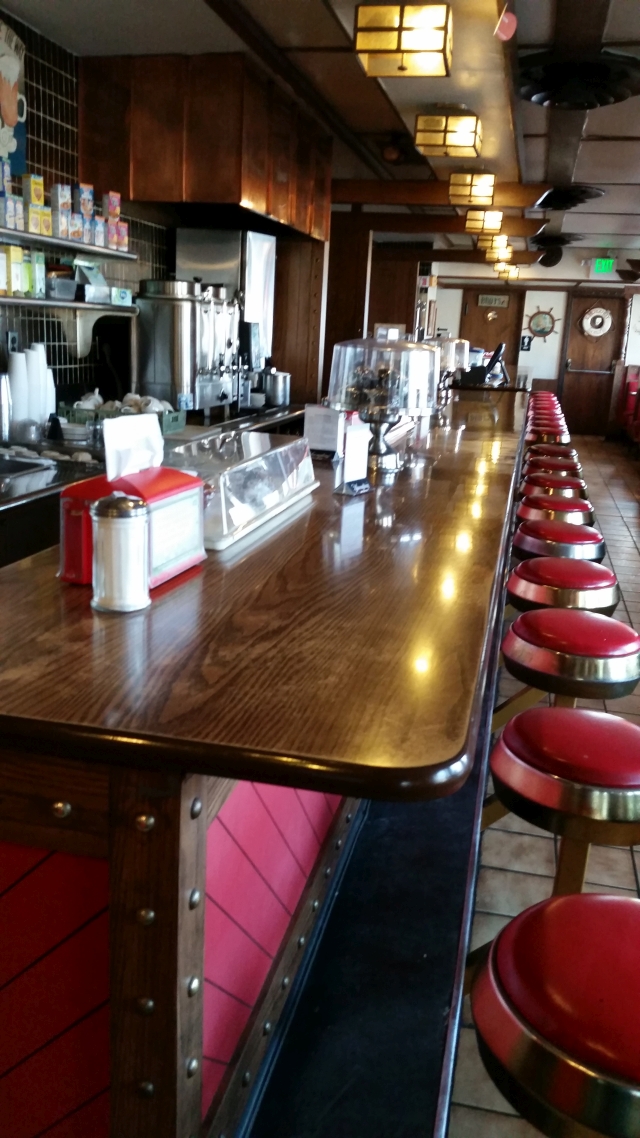 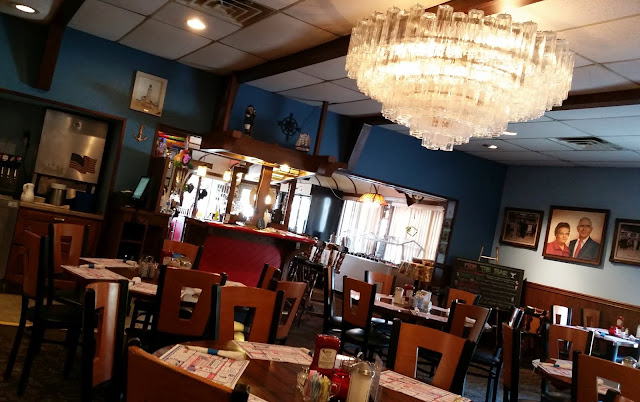 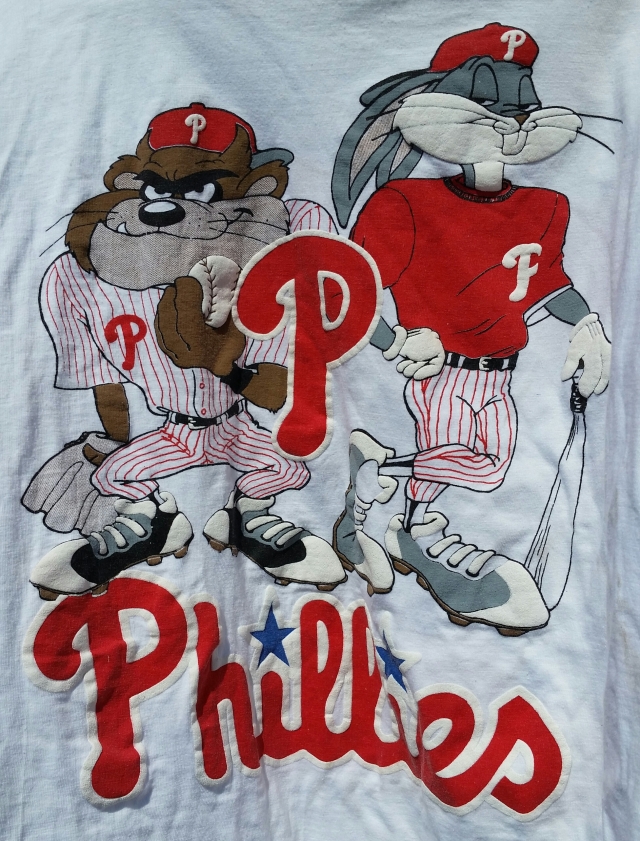 Phillies Looney Tunes Shirt
I saw this t-shirt at the Hometown Farmers Market earlier this week and I immediately had a flashback to living in South Florida in the early 90's.  These Looney Tunes baseball shirts were everywhere.  My dad and I went to a lot of Florida Marlins games in '93 and '94 and we saw hundreds of people wearing gear with Bugs Bunny, Taz and Tweety Bird.  Unfortunately, this shirt wasn't my size, but I would have bought it in two seconds if it had been. 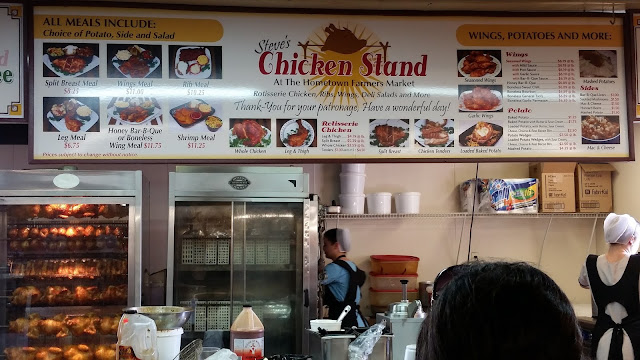 Steve's Chicken Stand
Hometown Farmers Market - Tamaqua, PA
This Amish stand in Tamaqua may have the best chicken that I've ever eaten.

It's almost a shame that it's tucked away in the Hometown Farmer's Market.  If they opened up a traditional restaurant in a place like Philadelphia or New York, I'm convinced that they would be a huge success.  More often than not, this stand has a pretty long line of customers waiting to be served, which is all the more impressive when you consider the fact that their customer base is limited to people farmers market shoppers on a single day of the week (Hometown is only open on Wednesday).

It's not like they have signs on the road to let you know there's a fantastic chicken restaurant in here.  In fact, they don't even have their own entrance or any seating.  They're in the dead center of a large building, across from a stand that sells honey and candles made from beeswax.  You'd never know they were here if not for the intoxicating smell of rotisserie chicken that wafts through the building.

I had an order of chicken tenders with seasoned potato wedges and a side of macaroni and cheese.  The photo truly doesn't do it justice.  The chicken was moist and delicious with the perfect amount of herbs and spices. 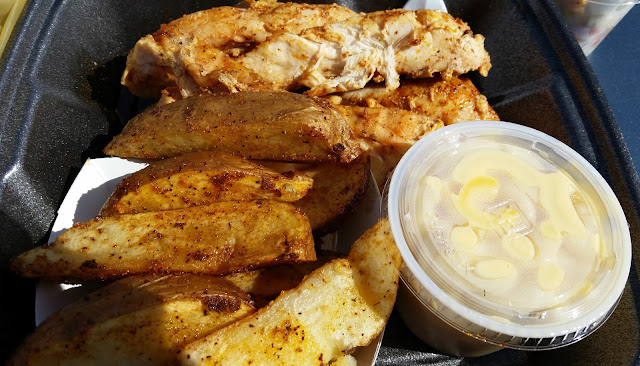 If you happen to be in Tamaqua, Pennsylvania on a Wednesday, you really should check this place out.  You won't be sorry. 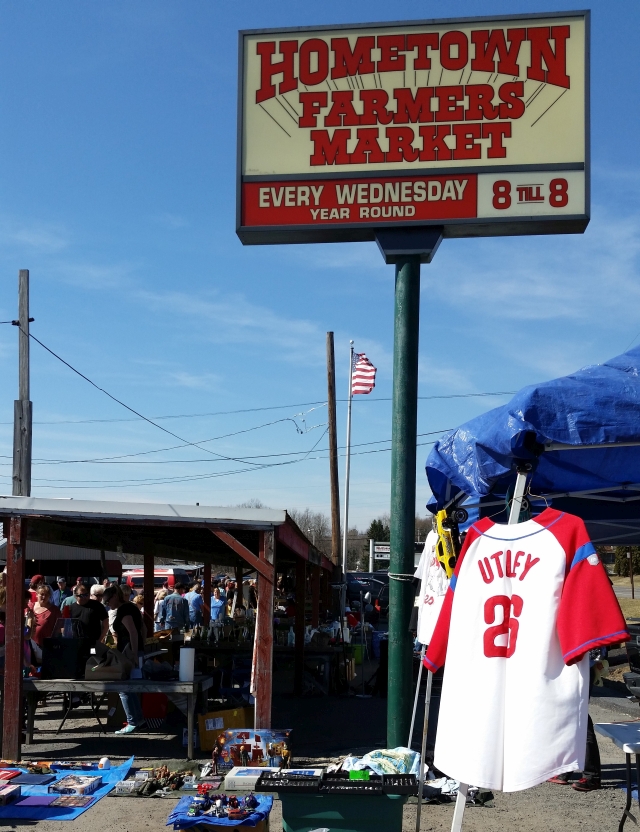 There were only a few flea market vendors with tables set up.  I didn't buy anything except food, but here are a few of the more interesting toys and other vintage items that were available. 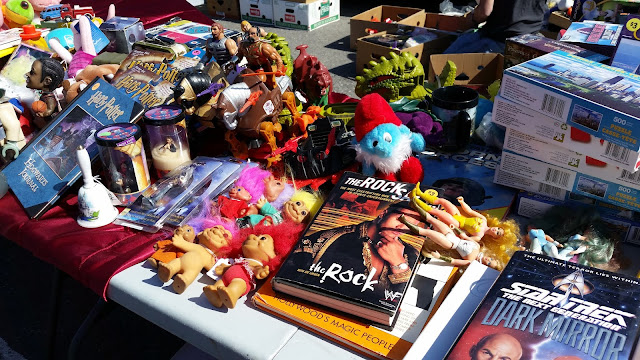 Watching the Toy Story movies gave me a whole different level of appreciation for scenes such as this.  Here we have She-Ra and Sweet Bee laying in the hot sun with their legs up and splayed over The Rock's face while Papa Smurf watches.  I'm not sure if that scenario has ever come up in fanfiction, but I wouldn't doubt it.

The Rock's 2002 autobiography is flanked by a collection of Trolls in various states of dress, and a copy of the 1994 Star Trek: The Next Generation novel: Dark Mirror.  There was also a Harry Potter children's book along with some toys from the series, and an Allen Iverson bobblehead.  Toward the back, you can see some Masters Of The Universe toys, including the figures for Fisto, Jitsu and Battle Armor He-Man.  Nearby are two of the horses: Stridor and Night Stalker, and two vehicles: Dragon Walker and Roton.  Pretty nice little collection. 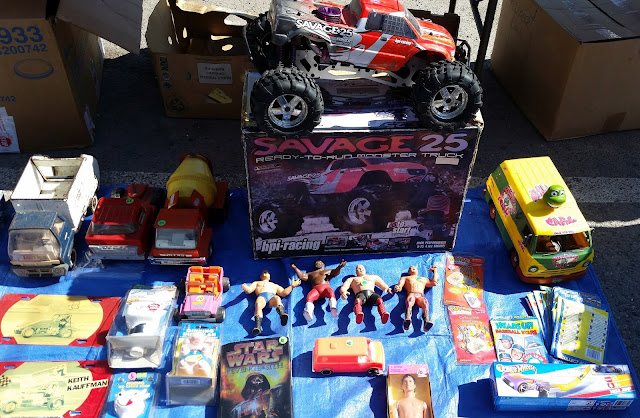 The WWF LJN toys immediately jumped out at me from this stand.  These figures are Bruno Sammartino, Junkyard Dog, George "The Animal" Steele and Brutus Beefcake, and they're from the mid 1980's.  I might have picked up the Bruno if I found it in a box for a dollar, but they were asking ten bucks each.  Maybe it's worth that much for a hardcore collector, but I've already got too many vintage toys as it is.  In fact, everything at this shop was overpriced.  Ten bucks for a used Revenge Of The Sith novel?  $30 for a Tonka truck that looks like it had been run over by a real truck?  $25 for a beat up Teenage Mutant Ninja Turtles van from 2006?  Get outta here!  I didn't even bother taking a closer look at the Heads Up Baseball Stars packs.  Based on the other prices, they probably had Harold Reynolds priced like he was Babe Ruth. 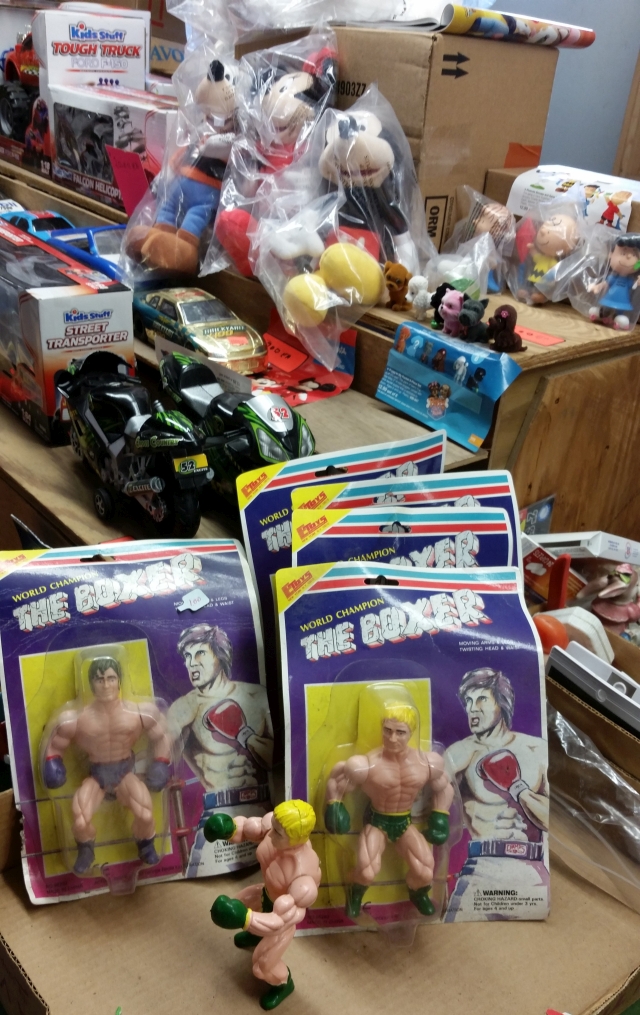 If there's anything I regret not buying on this trip, it's these.  These "World Champion: The Boxer" action figures were released by a New York company called EToys, which is a division of Etna Products.  They're clearly bootleg toys that were meant to capitalize on the Rocky films, which means they were more than likely released in the early 80's.

They were only a dollar each, and I was going to buy the one on the left that looks like it's supposed to be Rocky Balboa, but I was put off by the fact that the package looked like it had been gnawed on by something.  Even if it was mint, it's probably best that I didn't buy it.  All I would do is take a photo of it for the blog and then stick it in a box where I'd forget about it for the next decade.  I've already got more than enough of that cluttering up the house already.