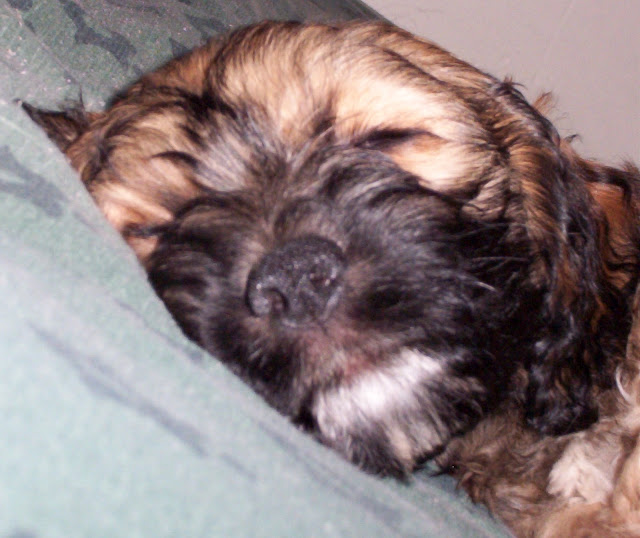 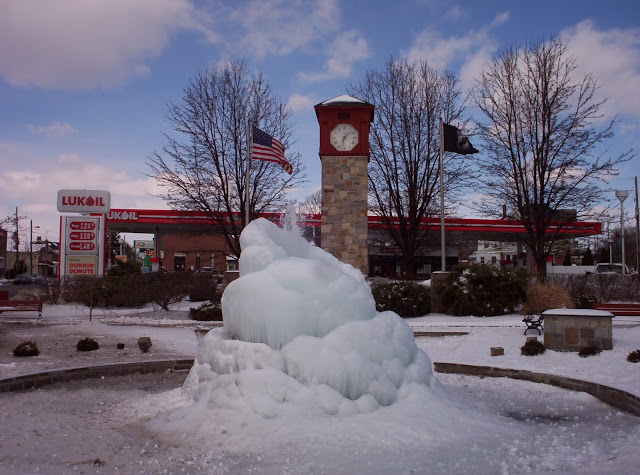 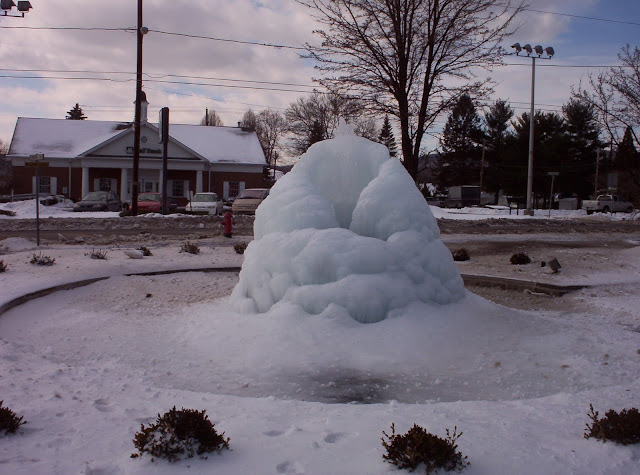 Detwiller Plaza Fountain
Main Street - Hellertown, PA
We found this fountain last week when we went to see Chikara: King Of Trios at the American Legion in Hellertown.  It's in a little park on Main Street that also includes a clock tower.  The clock tower was built in the 1980's, but the fountain dates back to the 40's.  Although it can't be seen in the winter when it's frozen over like this, the fountain is lit with fixtures that were repurposed from General Electric exhibit at the 1939 World's Fair. 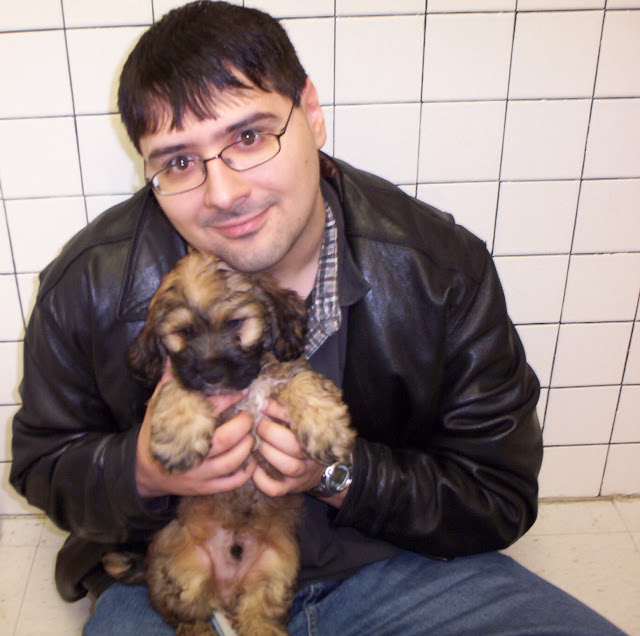 Meet the newest member of the family.  This is Sammy.

Shopping Through The Snow 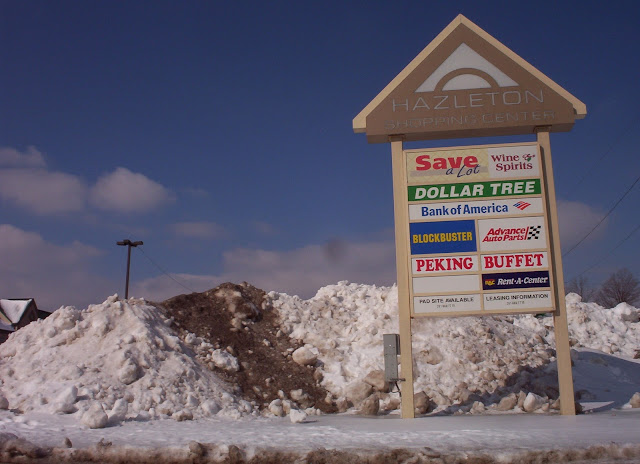 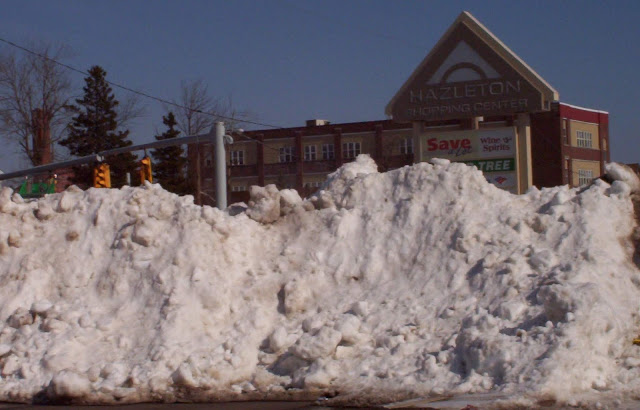 Hazleton Shopping Center
Broad Street - Hazleton, PA
Give it a few weeks and the plow pile will be taller than the sign.

At Least They Spelled Cantonese Right 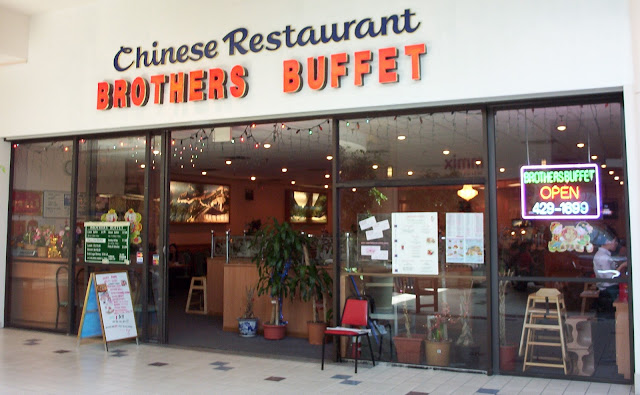 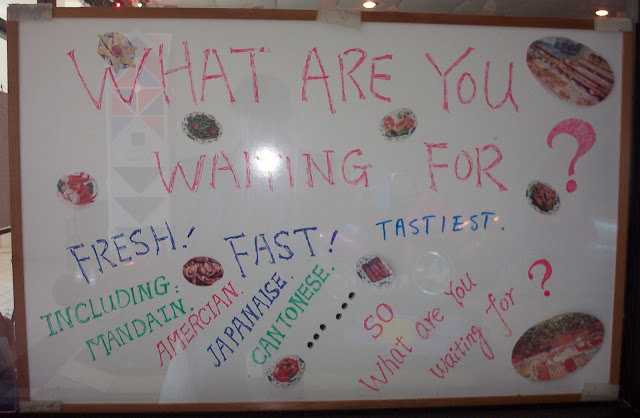 Brothers Buffet
Fairlane Village Mall - Pottsville, PA
Where else can you get "Mandain", "Amercian" and "Japanaise" food all under one roof?  What are you waiting for? 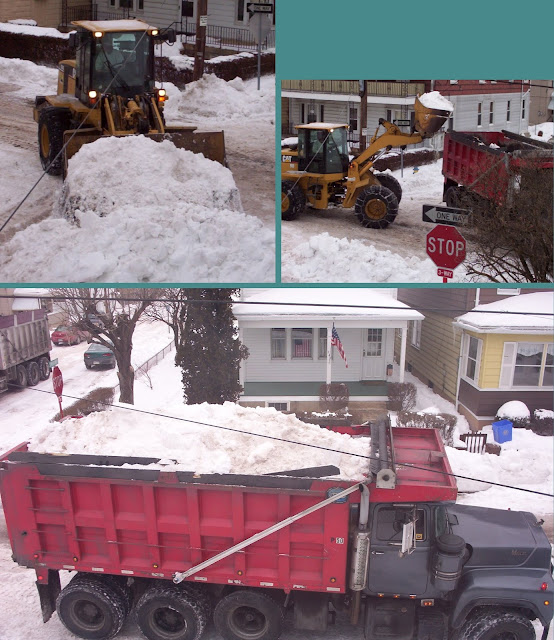 The Rise Of Morishima 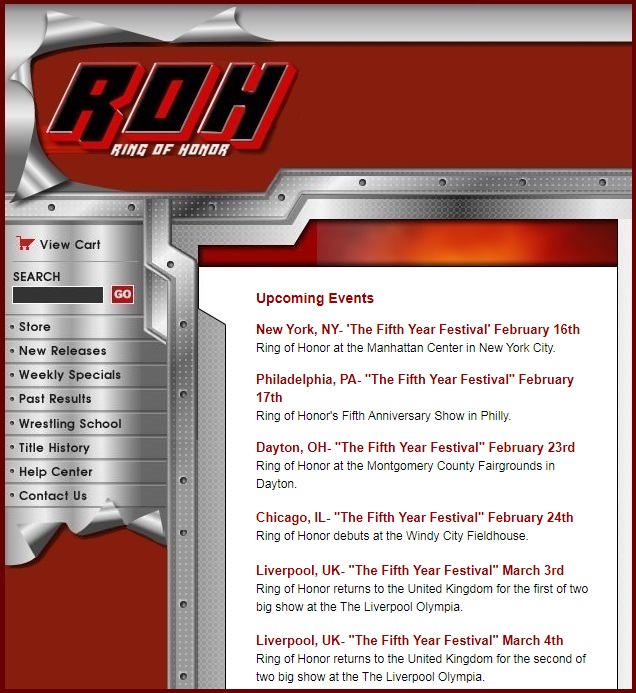 ROH: Fifth Year Festival - Night Two
PA National Guard Armory - Philadelphia, PA
Ring Of Honor have decided to split up their annual Anniversary Show into six different nights that are scheduled in venues in five cities across two counties from February 16th through March 4th.  This isn't the first time that the company has divided one of their major events across multiple dates.
I'm not really sure why, but I'm slightly annoyed by this.  It kind of feels like a gimmick to sell six DVDs instead of one to the folks who can only afford to buy the big shows while, at the same time, cheapening the live event feeling a little bit.  It's still a great night of professional wrestling, but it's not quite the same to be able to attend 1/6th of the Fifth Anniversary Show. 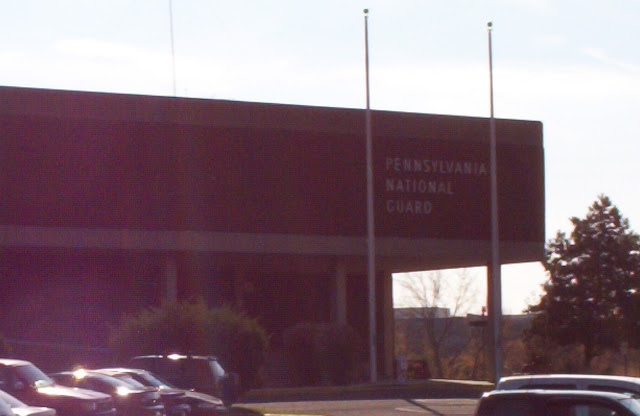 The second show of what is being called The Fifth Year Festival was held last night at the company's Philadelphia home: the PA National Guard Armory on Southampton Road, and it was a historic night for Ring Of Honor. 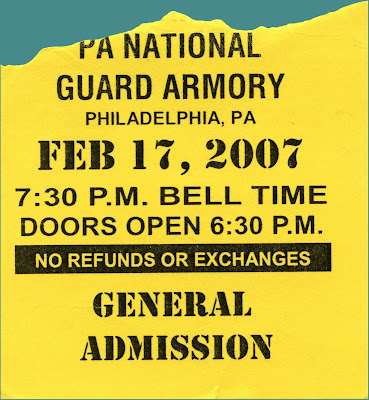 After the last show, I mentioned that Gabe Sapolsky had spent the better part of a year booking Homicide as the face of the franchise.  He was built up as the savior who won the war against CZW.  Immediately after that, he was put in the "Stone Cold" Steve Austin role against the evil authority figure, with Jim Cornette serving as the ROH equivalent of Vince McMahon.  Next, he picked up the victory over his longtime rival Steve Corino, and he ended 2006 by defeating Bryan Danielson for the ROH World Championship at Final Battle.
If 2006 was the rise of Homicide, it looked as if 2007 was going to be the year that he solidified himself as a dominant long-term champion.  Last month, he successfully defended the title against Chris Hero and the man who held the title for longer than anyone in company history, Samoa Joe.  I was in attendance for the latter (Battle Of The Icons), and it was an intense match with a red hot crowd.  On Friday, he successfully defended his title in New York against Jimmy Rave, further solidifying his status as the face of the franchise who took out one of the top heels in the company.
All of that buildup came to a sudden halt at last night's show when Homicide was defeated for the ROH World Championship by Japanese heavyweight Takeshi Morishima from Pro Wrestling Noah.  Morishima is an incredible talent who reminds me a lot of Samoa Joe, but I don't think that anyone in attendance last night expected that they would see a title change.  From what I understood, he isn't moving to the United States to work full time in ROH, but was instead on an American tour; sort of like an extended version of Kenta Kobashi's 2005 visit to the United States, but maybe not.  Whatever the situation is, one thing is is for certain - the ROH World Championship has truly become a global championship in the world of professional wrestling, and it's current holder is Takeshi Morishima.
Results:

Photos From King Of Trios 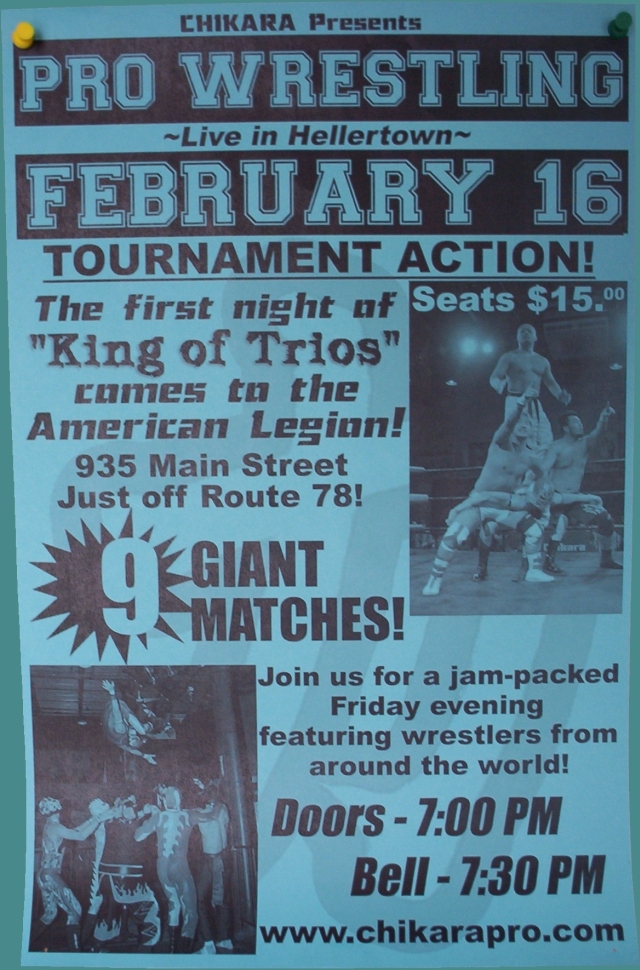 Chikara King of Trios: Night One
American Legion Hall - Hellertown, PA
Chikara is a unique company and one of the most fun pro wrestling promotions I have ever been to.  What other show can you go to see luchador ice cream men, a 64 year old wrestler and a patriotic wrestling gorilla?

This show was Night One of what will be a three night tournament of six man tag team matches.  We had a lot of fun and got to meet and talk to a bunch of the wrestlers.  Included on the card were Claudio Castagnoli teaming up with Los Ice Creams, rookie phenom Ricochet and veteran Tom Brandi performing as The Patriot.

The Artwork of Keith Lee 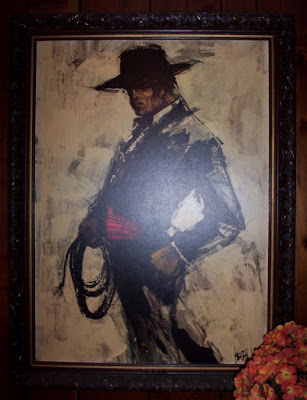 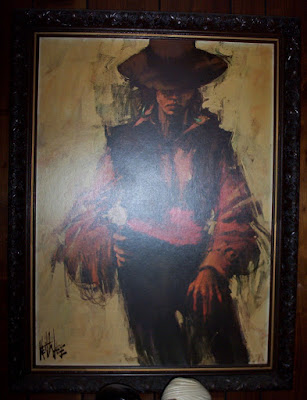 Matador and Señora paintings
Keith Lee
These paintings have been hanging in my grandparents parlor for as long as I've been alive.  I think they bought 'em in the late 1960's.  For some reason, my grandmother was going through a bullfighter phase when she was picking out decorations for the house, because she has a ceramic bull statue too.

I never knew much about the artist, and it's not been easy to find information about him, but here's what I was able to find.  His name is Milton Lee, but he signed his work as Keith Lee.  He was born on October 12th, 1927 in Chickasha, Oklahoma.  He died less than four years ago on December 6th, 2003 in Granada Hills, California.  At some point, he had a studio on Forbes Avenue in Granada Hills.

Update: I've found other paintings of his on eBay that I really like.  This pirate ship panting is my favorite so far.  It reminds me of the end of The Goonies. 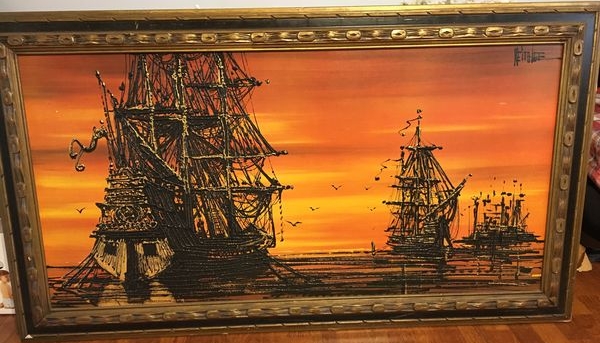 A Sinful Place To Eat 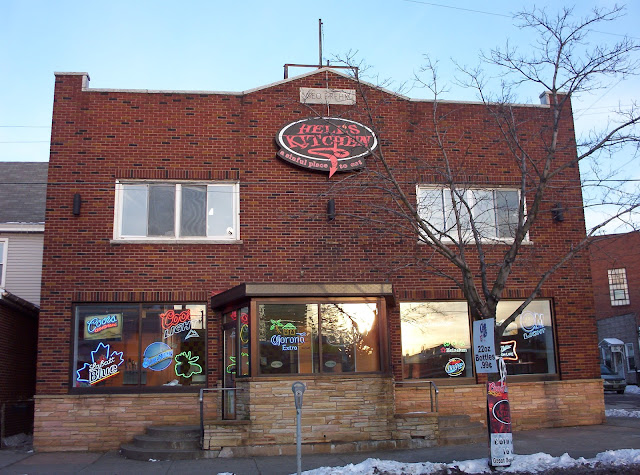 Hell's Kitchen
North Broad Street - West Hazleton, PA
We ordered pizza from Hell's Kitchen for my grandfather's birthday last night.  It's just a few blocks down from their house, so it's a pretty convenient place to pick up dinner.  They also have one of the best pizzas that I've ever had, and I've had a hell of a lot of pizza in my life (no pun intended). 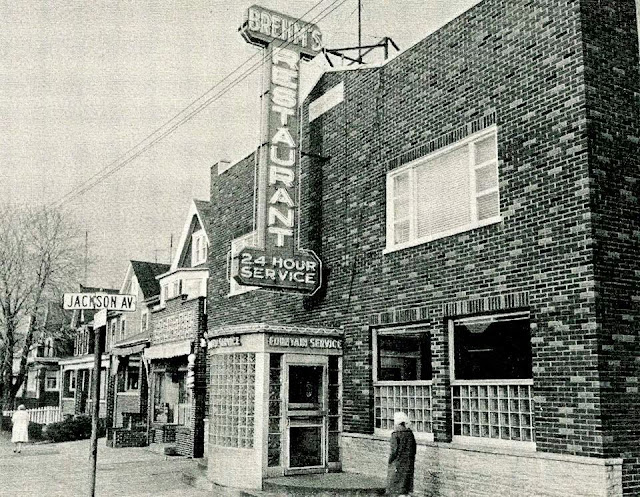 This restaurant has gone under a few different names over the years.  When my dad was a kid, it was Brehm's Restaurant which was owned and operated by Georgie Brehm.  He was my great-great grandmother Christianna Brehm's brother, and he may be the most interesting branch of my family tree.  I'd like to research his life and write more about him at some point, but for now, let's just say that Hazleton wasn't known as Mob City for nothing.
Brehm's Restaurant remained in business for over 50 years.  From the little bit of research I've done, it seems like Georgie Brehm retired and sold his restaurant on December 14th, 1970 to a company called Ro-Sch Inc.  They kept the original name for a few years, but the restaurant went by several different names throughout the 70's, including The Hut, Gina's Pizza Villa, and The Roman & Greek Warrior's Restaurant & Pizzeria.  Unfortunately, none of the new owners could were able to keep the business going, and the restaurant sat vacant throughout most of the 80's.

The restaurant reopened its doors on July 22, 1989 as J&B Diner, and they operated as a sit-down restaurant.  However, in just over one year, the diner closed and the restaurant became a pizza parlor called Andre's.  I wasn't born when Georgie Brehm ran his restaurant, so I've always thought of this building as the old Andre's Pizzeria.  It's the place where my grandparents would order pizza from when I was in middle school, and it's the place that my friends and I would stop for a slice and a Farmer's Iced Tea when I was a teenager.
Andre's stayed in business throughout the 90's and into the early 2000's, but they closed shortly after someone sued them after slipping on some ice on the stairs that led up to their front door.

The building was vacant again for a couple of years before it was purchased by its current owners, who bought the business in 2005 and reopened the following year as Hell's Kitchen.  They haven't gone so far as to include the devil in the restaurant or in any of its advertisements, but they're tiptoeing right up to the line. 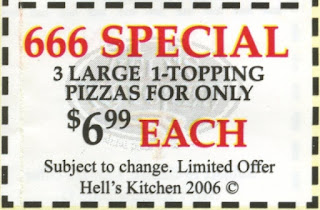 My only complaint about this special is the price.  Come on, guys!  Do you really need the extra 33 cents?  If you're going to have a coupon for something called the 666 Special, you've got to commit to the bit and charge $6.66.  What would the dark lord say? 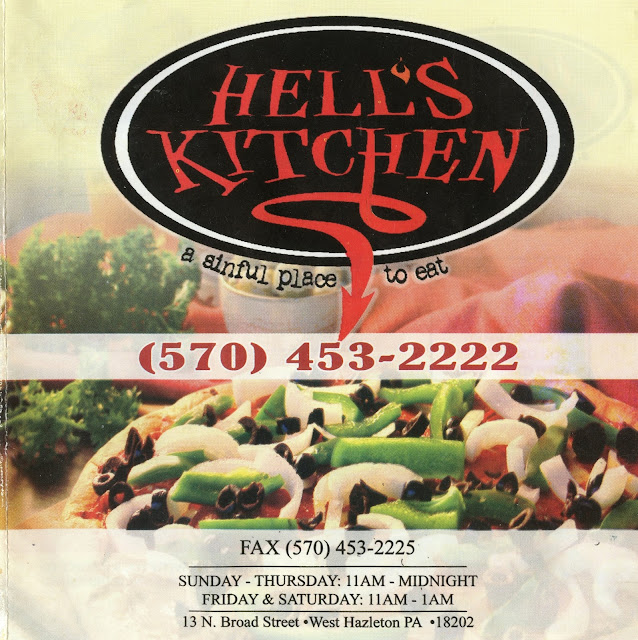 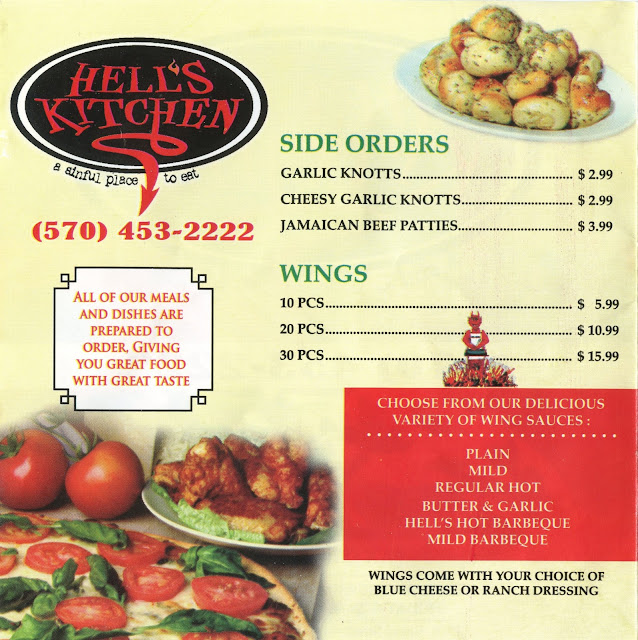 Everything that I've tried here has been outstanding.  Their Hell's All Pizza with the secret Hot Hell Sauce is my favorite, but there's no way in hell that my grandparents were going to go for that (pun fully intended this time).  So, for my grandfather's 70th birthday, we ordered a couple of regular cheese pizzas. 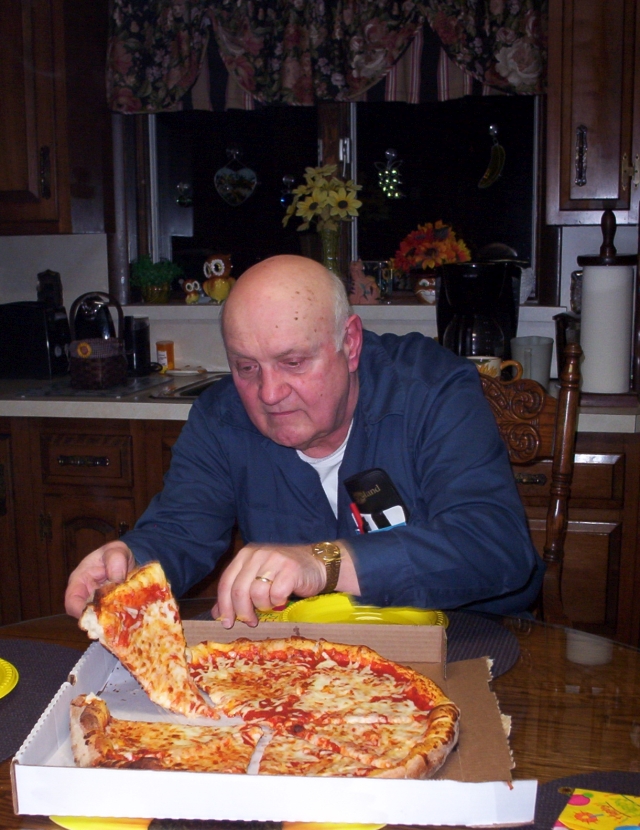 There's nothing fancy about their regular pizza.  It's just a damn good pie with fresh crust, a flavorful seasoned sauce and lots of cheese, and it's sold at a very reasonable price.  They don't even ask for your soul.  If you're ever in the area, give 'em a shot. 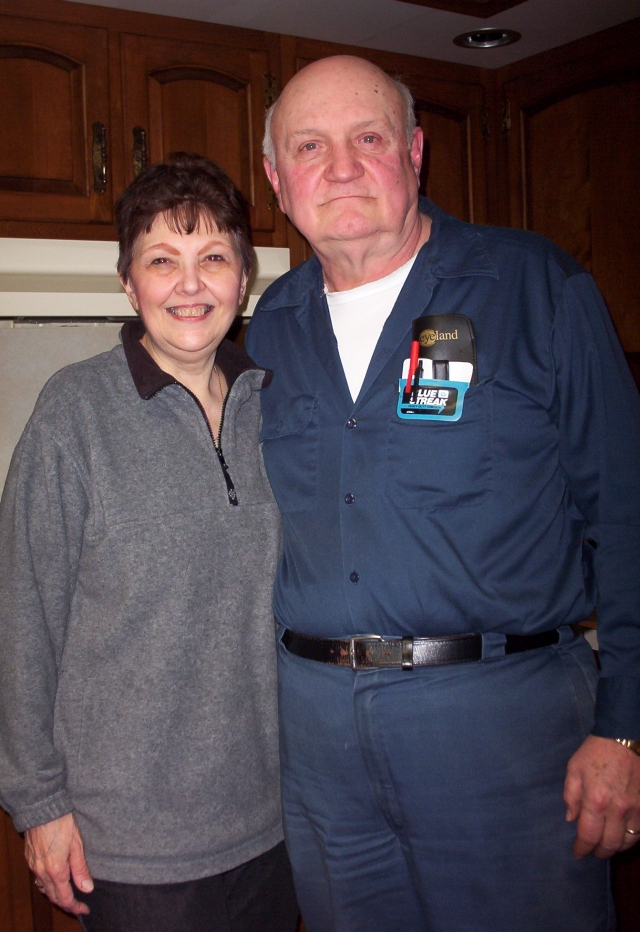 Happy 70th birthday to the best grandfather in the world. 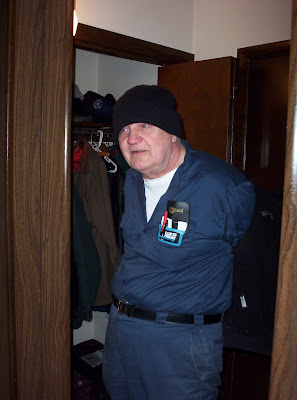 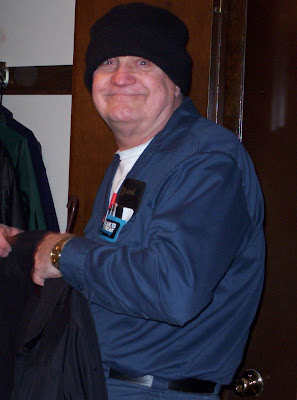 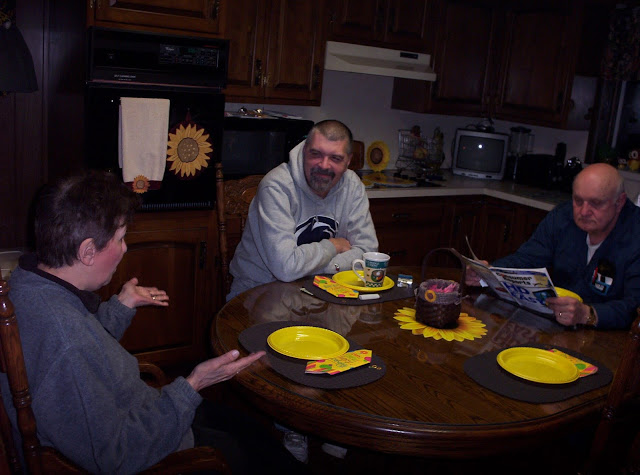 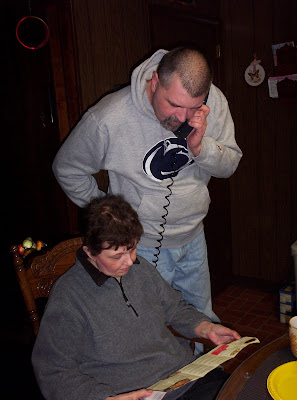 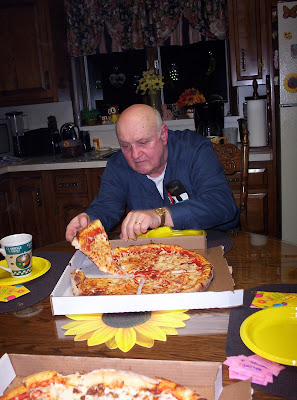 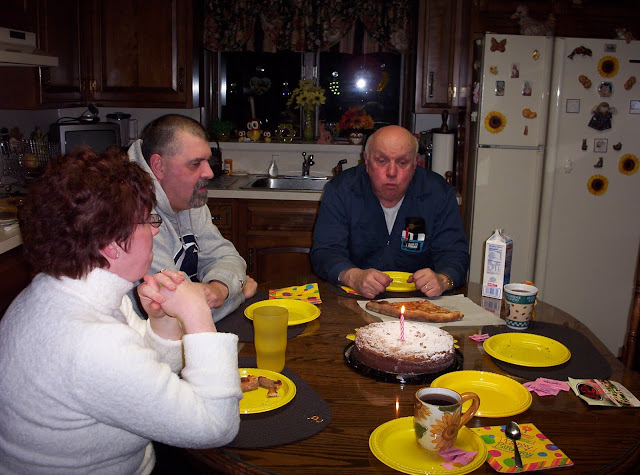