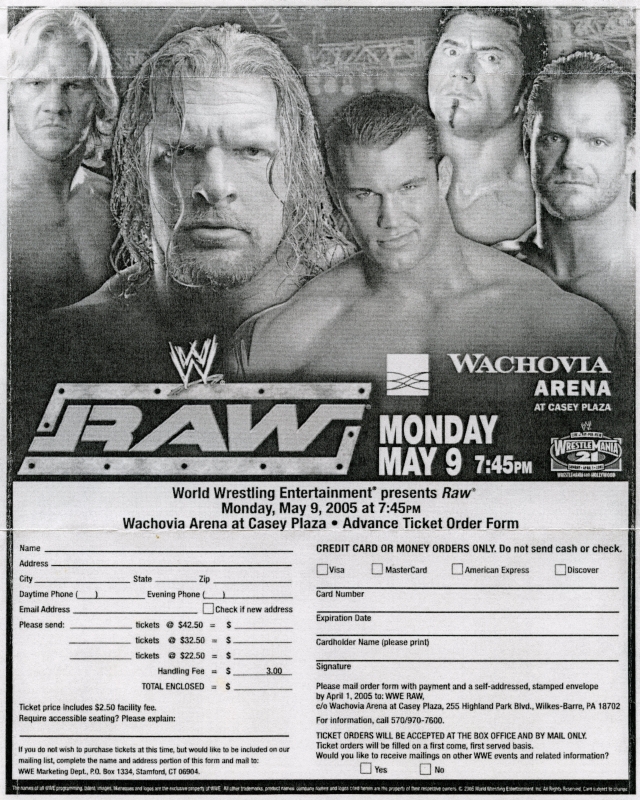 WWE Monday Night Raw and Sunday Night Heat
Wachovia Arena - Wilkes-Barre, PA
I'm really glad that I went to this show.  I've been to a few wrestling events over the years, but I never got to see Ric Flair wrestle in person before last night.  It was originally scheduled to be a match between Christian and Flair, but "Captain Charisma" came out to say that Flair had to go through his "Problem Solver" Tyson Tomko first.  It was a fun match with lots of outside interference from Christian.  In true Nature Boy fashion, the "dirtiest player in the game" hit Tomko with a low blow and held onto his trunks to get the victory in what was a very fun match.

Before the live Raw show began, there were three matches that were filmed for Sunday Night Heat, which will air on Spike TV on May 15th, and each of them were pretty good.  The night began with Stevie Richards, the former leader of the Blue World Order in ECW, taking on the co-winner of WWE Tough Enough III, Matt Cappotelli.  It was a surprisingly good match with Stevie playing the heel and getting the victory with a roll up in which he held Cappotelli's tights.

Chris Masters came out next to make the Master Lock Challenge.  It was an open challenge to anyone in the locker room to allow themselves to be put into his full nelson, which he called the Master Lock.  If they managed to get free of the hold, they would win $5,000.  A man from the back took the challenge, and predictably, he did not succeed. 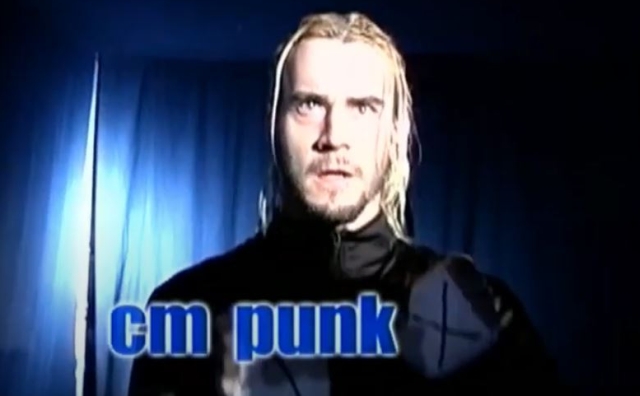 I managed to confuse everyone sitting around me for the second match.  Val Venis came out to wrestle against a guy who didn't get ring entrance or music.  This usually means the opponent is a jobber, but it was former ROH Tag Team Champion CM Punk, who has been regarded as one of the most talented wrestlers on the indy scene for years.  Punk had a lot of offense in the match, and even did a spot were Val Venis shook his hand in a show of respect, only to have Punk attack him immediately afterward when his back was turned.  I'm wondering if this was a tryout match for Punk, or if he might have already signed a contract with WWE.  If that's the case, I have a hunch that those same fans who looked at me like I was a weirdo who cheered who they saw as a random jobber will be telling the story about how they saw Punk before he became a WWE Superstar.

The final match on the Heat taping was one of my favorite wrestlers, William Regal taking on Antonio Thomas, who is one half of a new tag team called The Heart Throbs.  The newcomers made their television debut in a tag team match last month against Regal and Yoshihiro Tajiri, who were tag team champions at the time.  It makes sense to see the rookies working with an established veteran like Regal so that they can get some experience in front of big crowds and learn from one of the best performers in the business.  Regal won the match via disqualification when Antonio's tag team partner, Romeo Roselli, interfered in the match.

Monday Night Raw began with Triple H in the ring cutting a promo on Batista to challenge him for the World Heavyweight Title.  Batista mocked him by saying that he already defeated Triple H twice, and he doesn't deserve a title shot after being knocked out of the Gold Rush Tournament in the first round by Chris Benoit.

The first match of the night began with Muhammad Hassan coming to the ring with his henchman, Davari.  The two of them teamed up a few weeks ago at the WWE Backlash and lost to the team of Hulk Hogan and Shawn Michaels, and Hassan has been abusing Davari ever since.  Davari got on his knees to ask Hassan for forgiveness before standing up and challenging anyone in the locker room to a match as a way to prove himself to Hassan.  Chris Jericho accepted the challenge and defeated Davari with the Walls Of Jericho submission.  After the match, Hassan ran into the ring to attack Jericho and put him in the Camel Clutch before Shelton Benjamin, came into the ring to make the save. 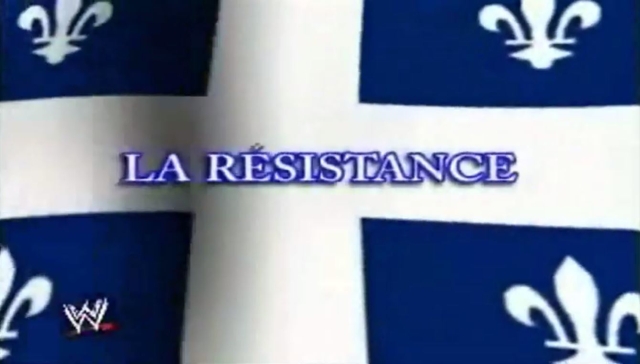 The former WWE Tag Team Champions La Résistance were present for a lot of the show.  They seem like they're doing a storyline that will lead to the team splitting up and feuding with each other.  At this point, General Manager Eric Bischoff is having Sylvain Grenier and Robért Conway wrestle in singles matches against other opponents to find out which of the two is the better man.  The first of these had Grenier being squashed by Viscera, literally and figuratively.  After the match, the former King Mabel stole nachos off of a fan and then used them to sexually assault ring announcer Lilian Garcia.  I wish I was making this up, but if you saw the show, you know I'm not.  The second of these matches saw Conway lose in a non-title match to Intercontinental Champion, Shelton Benjamin.  It was a longer match, so I guess that means that Conway sucks less than Grenier.  After the match, Hassan and Davari came out to attack Benjamin on the entrance ramp, so we're sure to get an IC Title feud between Hassan and Benjamin soon. 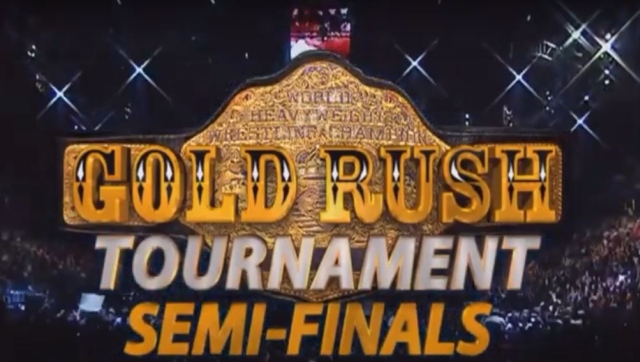 The Gold Rush Tournament started off with a bang last week.  The first round match between Shawn Michaels and Shelton Benjamin was one of the best matches I've watched in a long time, and it ended with a phenomenal HBK superkick with Benjamin in mid-air from a springboard off of the ropes.  The semi-final matches that took place in Wilkes-Barre weren't as phenomenal as that, but they were pretty great in their own right.

The first of the two Semi-Final matches in the Gold Rush Tournament was between a former WWF Champion, Kane,  and a former WCW Champion and World Heavyweight Champion, Chris Benoit.  Kane came to the ring with his "wife" Lita, who was walking on a crutch.  Toward the end of the match, Lita was knocked into the wall.  Benoit checked on her, and Kane attacked him from behind.  About a minute later, Kane blocked an attempted crippler crossface and chokeslammed Benoit for the win.

The second Semi-Final match was the main event of the show.  One of the greatest professional wrestlers of all time, Shawn Michaels, took on the winner of the Money-In-The-Bank briefcase at Wrestlemania 21, Edge.  It was a fantastic match that went about 10 minutes and ended with Edge smacking HBK in the head with the briefcase to get the pinfall victory.  He will go on to wrestle Kane in the finals to determine the tournament winner and the #1 contender to face Batista for the title. 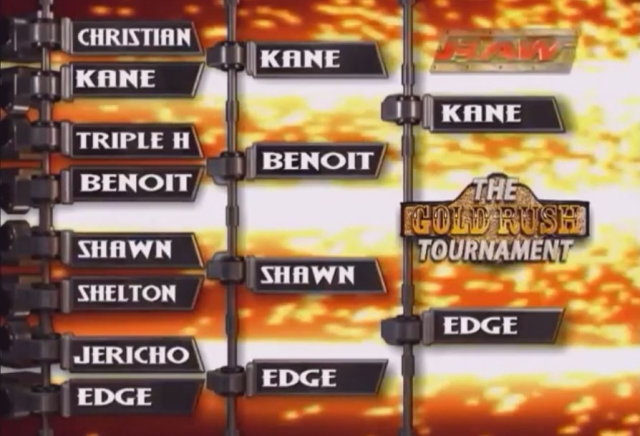 Speaking of Batista, there was a dark match after the live broadcast of Monday Night Raw went off the air.  The World Heavyweight Champion wrestled Muhammad Hassan and Daivari in a handicap match.  It ended when Hassan left the arena and abandoned his partner in the ring.  Batista hit Davari with a powerbomb and pinned him to win the match.  Afterward, the champ walked around the ring to shake hands, sign autographs, and pose with the championship belt with fans. 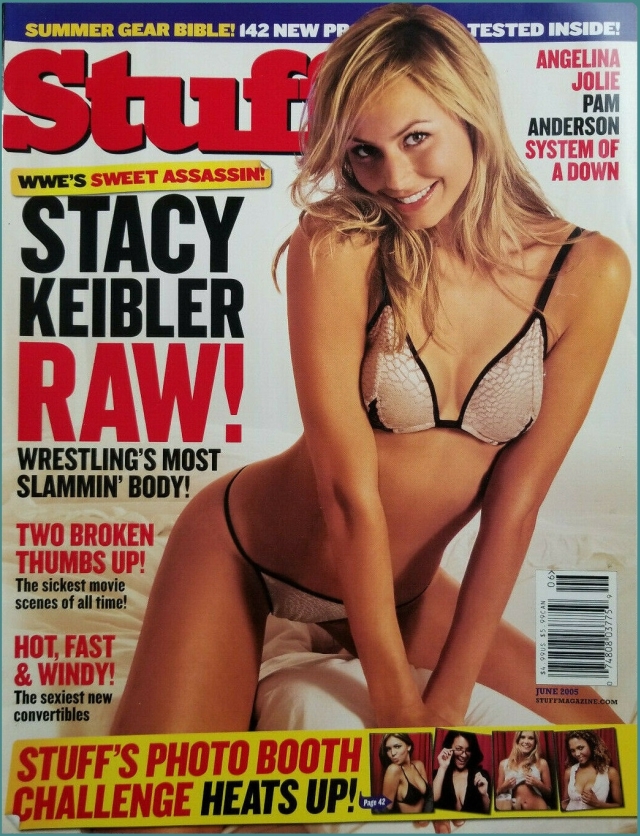 There were a few other segments during the night.  The longest of them was an interview in the ring with Stacy Keibler to promote her appearance on the cover of the upcoming issue of Stuff Magazine.  They showed some of the pictures from the magazine on the Titan Tron, and Stacy revealed that she was wearing the same underwear from the photo shoot tonight.  They teased having her unzip the front of her skirt to show the crowd, but she was interrupted by Simon Dean and Maven, who came to the ring to make fun of the audience and to promote the Simon System weight loss milkshakes.  This ended when the two heels tried to force Stacy to drink the milkshake, which prompted the World Tag Team Champions, The Hurricane and Rosey (formerly Matt E. Smalls of the Samoan Gangsters in WXW here in Hazleton), to run in and make the save.

Here are the full match results of the night: