Rage In The Cage 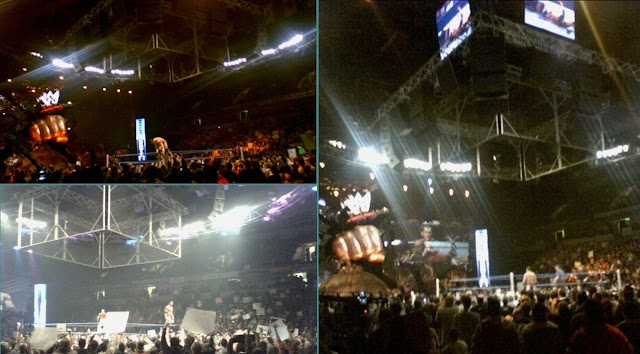 WWE Velocity and Smackdown TV Taping
Wachovia Arena - Wilkes-Barre, PA
This was kind of a last minute decisions so my seats weren't too great, but I did get to see my first WWE cage match.  Also, two wrestlers from WXW in Hazleton appeared on the show: "Smooth" Tommy Suede and Supreme Lee Great, who worked under his real name, Jon Trosky.  It was also the debut of The Shane Twins from OVW who were promoted and repackaged as The Gymini.  The matches were decent, but the show was centered around a dopey soap opera storyline in which Melina has accused Batista of sexual harassment.

The Smackdown matches were recorded to air on the UPN Network this Friday, January 6th.  The Velocity matches will be streamed on WWE.com as of Saturday, January 7th.


Update: This was Juventud Guerrera's last appearance in the WWE.  He had a number of backstage altercations, and he performed moves that he was told not to do (including the 450 Splash) in his match against Kid Kash.  He was fired from the company after the show.