The Fight Of The Century ROH: Fight Of The Century
Inman Sports Club - Edison, NJ
Ring Of Honor is to technical wrestling what ECW was to hardcore wrestling.  They have become known for popularizing five-star matches in the United States.  Matches such as this have been popular in Japan and among tape traders here for many years, but they only occasionally appeared in mainstream American wrestling, such as the Wrestlemania 3 classic between "Macho Man" Randy Savage and Ricky "The Dragon" Steamboat.
I've been attending ROH shows in New York, New Jersey and Pennsylvania for the past ten months, and I've had more fun at these shows than I've ever had in a lifetime of watching professional wrestling.  There were a lot of great matches on these shows.  However, I don't think I've ever watched a single match, live or on television, that tops the main event of last night's show in which Samoa Joe challenged "The American Dragon" Bryan Danielson for the ROH World Championship.  The match went to a 60 minute time limit draw, and it truly lived up to the hype of being the Fight Of The Century. 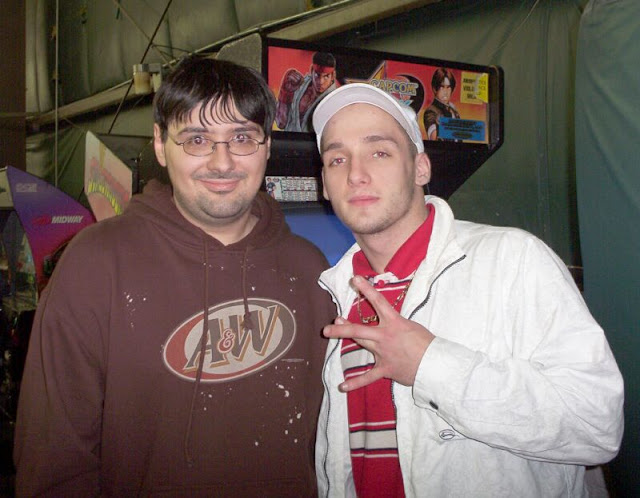 After the show, I bumped into Jack Evans at the little mini arcade that's outside of the hockey rink area at the Inman Sports Club.  Unfortunately, I didn't have change or else I would have challenged him to a game of Capcom vs. SNK: Millennium Fight 2000, but he was very awesome and took a photo with me.