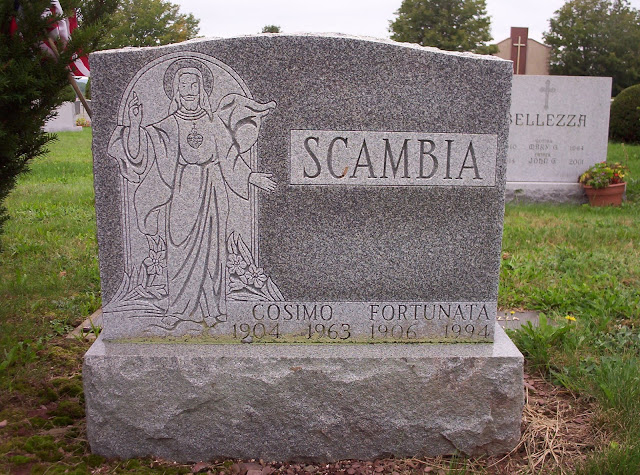 My grandparents and I stopped at the Calvary Cemetery earlier today to visit the place where my great-grandparents were laid to rest.  Out of all the members of my family who I wish I would have gotten to know better, my paternal grandmother's mother and father are at the top of the list. 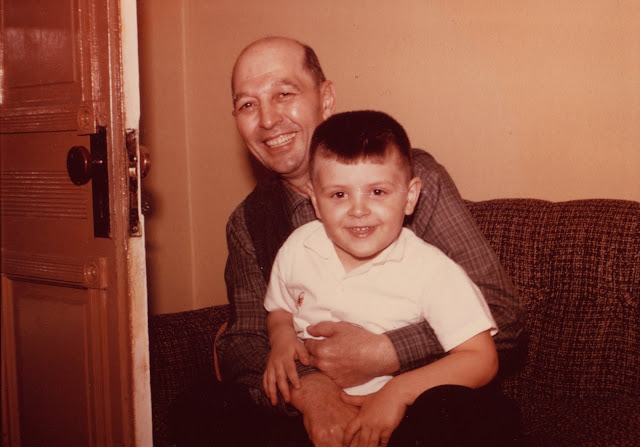 This is a photo of my great-grandfather, Cosimo Scambia with my father sitting on his lap.  Even though he died when my dad was young, the two were very close.  To this day, when Dad talks about him, he can't help but to smile and to share every memory he has of spending time with his grandfather.
From what I've been told by my family, Cosimo lived a very interesting life.  He was connected to the mob, though I can't say to what degree.  My grandmother likes to say that he "had shady friends", but other stories in the family made it clear that he was involved in whatever shady business was taking place.  I'm certainly not going to get into any of those stories here, but I will say that if I could pick one of my family members or ancestors to take out to a bar to hang out and listen to the story of their life, it would be him.
The stories Dad tells me about Cosimo (who he called Pap Pap) are either second-hand accounts of what he was told, or the memories of a toddler.  For example, Pap Pap used to take my dad to the Blue Comet Diner for lunch.  If they walked past an empty table that still had the tip on it, Cosimo would tell my dad "Oh look, you're lucky!  You found money!" and encourage him to take it.  Then, when he thought my dad's back was turned, he'd leave money to replace the tip on the table.  Speaking of money, he once got into an argument with my grandmother at the kitchen table because he wanted to buy my dad a shoe shine kit.  His logic was that he would never be broke - if he ever wanted money to go get a sandwich and a soda, he could earn it anytime just by taking his shoe shine kit downtown.  I don't know if this was still a thing that happened in the early 60's, but it made perfect sense to Cosimo.  My grandmother wouldn't allow it, saying that "I'm not going to have my son shining shoes on Broad Street for nickles".  He also wanted to teach my dad how to box, but grandma put the brakes on that plan as well.  I'm sure that if he hadn't passed away when my dad was so young, Cosimo would have done both and kept it hidden from my grandmother.
Cosimo died on September 2nd. 1963.  He was waiting for a bus to come over to see my dad.  Dad told me that he was all dressed and waiting for his Pap Pap to arrive when he heard the news that he had a heart attack. 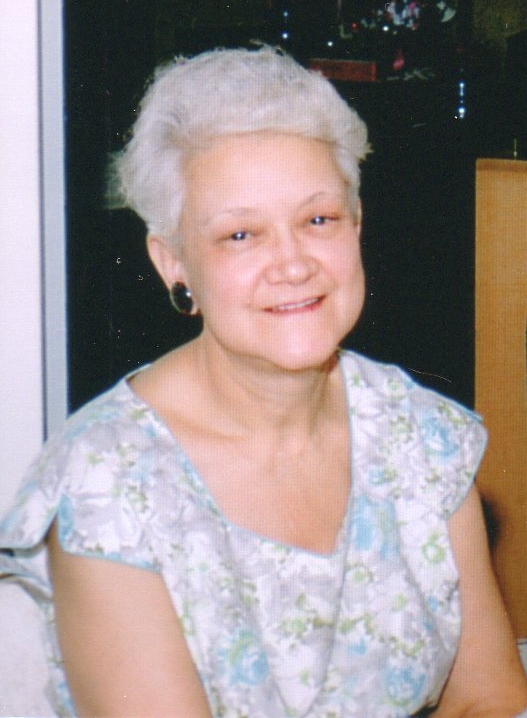 This is my great-grandmother, Fortunata Scambia.  Everybody who knew her just called her Tuna, except for Dad and I.  We both called  her Nana.  I was lucky enough to get to know her when I was a kid.  She had her own apartment when I was very young, but she moved in with my grandparents when I was around six years old, so I got to see every weekend that I went to my grandparents house.
Both of my great-grandparents are Italian, but they're not the same ethnicity.  Cosimo's family came from Calabria (the southern tip), but Nana's family came from Tyrol, which is a region in the Alps that includes part Northern Italy and part of Western Austria.  It was once part of the Holy Roman Empire, the Austrian Empire and the Austro-Hungarian Empire, and despite the fact that it's physically located in Italy and Austria, the Tyrolean people aren't really ethnically Italian or Austrian.  They've kind of got their own thing going on.  Obviously, I'm far from an expert on the subject, but I do know that Nana was very proud of being Tyrolean, as is my Grandma.  In fact, my grandmother always makes a point of correcting me when I say that I'm Italian by telling me that I'm Calabrese and Tyrolean. 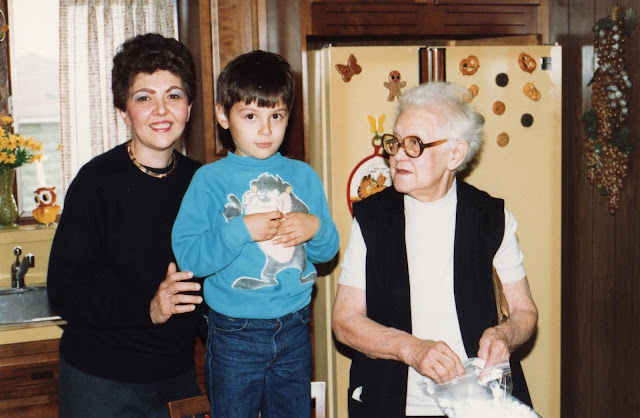 This is a photo of Grandma (left) and Nana (right) with me in the middle.  It was taken in my grandparent's kitchen, but there wasn't a year written on the back.  If I had to guess, I'd say it was taken in December 1986.  The month is a complete guess based solely on the fact that there's a gingerbread man magnet on my grandmother's freezer.  At any rate, it had to be Fall or Winter, because I know that I got that Taz shirt when we went on vacation to Wildwood.  The hot shirt at all of the shops on the Boardwalk that year was one that said "I'm the Tasmanian Devil.  Who the hell are you?", and they obviously didn't make that one for kids, so my grandparents asked at every shop they went to until they found it. 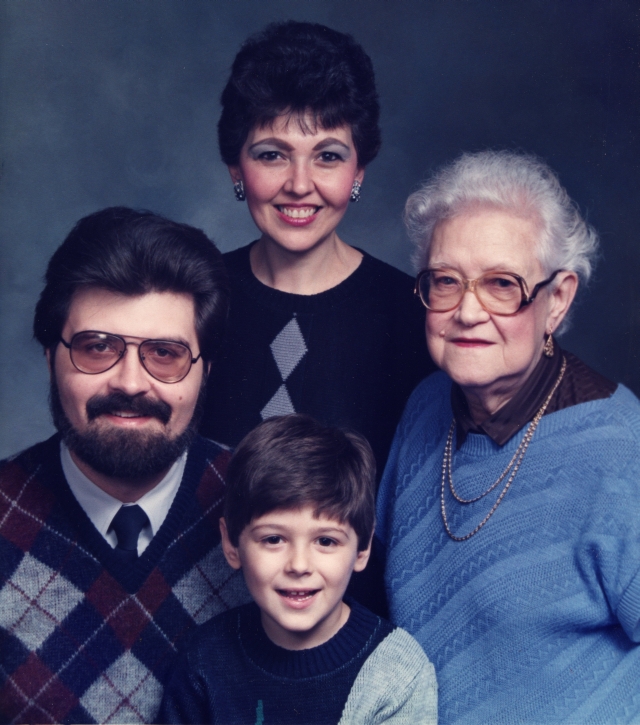 Nana was awesome, but I never really got to know who she was.  By the time I was born, she was in her seventies, so I knew her as a great-grandmother who carried saccharin tablets in her purse to use in coffee, and who liked to sit on the front porch and do crossword puzzles, and who always said "honest to goodness" when you told her something that she didn't know how to react to.  However, there was a lot more to her that I've only ever learned in fragments - like the fact that she was a Flapper during the 1920s.  Also, she didn't get married until she was in her thirties, which was pretty rare back then, and no one knew she was married to Cosimo for a full year, which would still be pretty weird today.  I have no idea what caused them to keep their wedding a secret for that long.
The last time I saw Nana was when Dad, Liz, Stephanie and left my grandparents house on New Years Day, 1992 to go back to Florida.  I remember that for Christmas, she got a VHS tape of Victor Borge that we watched together.  She passed away just over two years later while I was still living in Boynton Beach.