The Rise Of The Fallen Angel 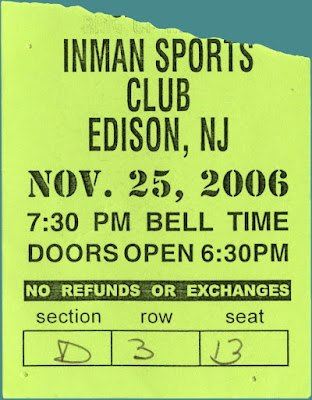 ROH: November 25, 2006
Inman Sports Club - Edison, NJ
This is the first time that I was in attendance to see one of the ROH titles change hands.  The Kings Of Wrestling were defeated for the Tag Team Championship by "The Fallen Angel" Christopher Daniels and Matt Sydal in the eighth match of the night.  This is the first time Matt Sydal has held an ROH title, but it's Christopher Daniels' second time with the belts.  He was one half of of the first tag team champions in company history as a member of The Prophecy in 2002.  There have been rumors for the past few weeks that Claudio Castagnoli is in talks with WWE, so I'm not too surprised to see The Kings Of Wrestling drop the titles, but I was pretty shocked that it happened at this show.  I thought that they would end up losing to as established team like The Rottweilers or The Briscoe Brothers.
Speaking of the Briscoes, they had an intense tag team match in the main event against Samoa Joe and Homicide.  It was advertised as a Street Fight Rematch, which ended up being a Falls Count Anywhere match that was held under elimination rules.  This meant that a single pinfall or submission wouldn't end the match - it would just eliminates the person who was pinned or submitted, and leave the remaining member of the team in a 2-on-1 situation.  It ended up being a moot point, because Joe and Homicide both hit their finishers and pinned Jay and Mark Briscoe at the same time - odd finish to a wild match.
Results:
UPDATE: This show was released on DVD under the name "Dethroned".  It's available for sale on ROHWrestling.com.
UPDATE #2: Mitch Franklin would continue with ROH under the name Grizzly Redwood.  His opponent on this show, Jagged, went on to sign with AEW where he wrestles as Angelo Parker.