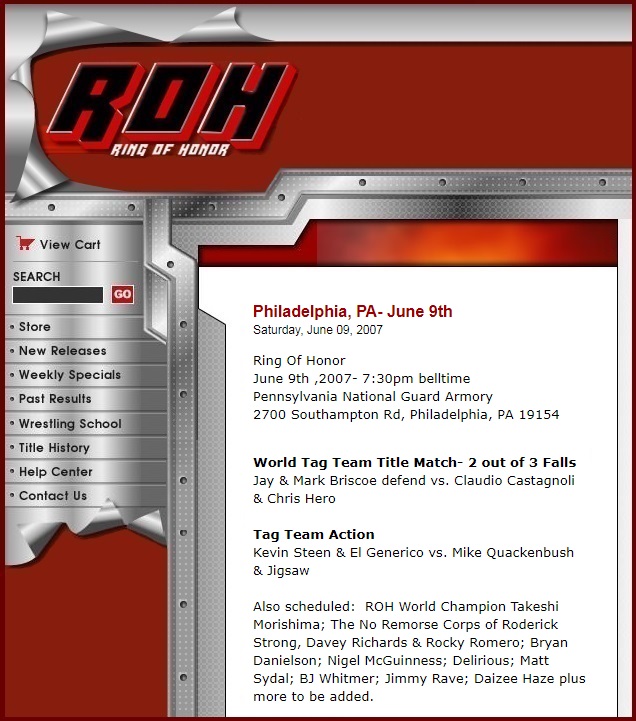 ROH: June 9, 2007
PA National Guard Armory - Philadelphia, PA
Wrestlers from the Chikara roster coming over to Ring Of Honor (and vice versa) is not a new development.  Chris Hero, Claudio Castagnoli, Delirious, and several others have wrestled for both promotions for a while now.  However, the Ring Of Honor relationship with Chikara seems to have taken on a new level of importance after TNA made the decision to pull all of their contracted talent from future ROH events.  We're now beginning to see wrestlers such as Mike Quackenbush and Larry Sweeney take on more prominent roles in Ring Of Honor, with other Chikara talent filling out the midcard, including Gran Akuma, Jigsaw and Hallowicked.  I don't see this turning into a storyline of an inter-promotional feud like they had with CZW, but it would be pretty cool to see Quack get pushed to the main event as the head of a group of Chikara luchadores.
There's no Chikara faction yet, but they're pushing Delirious, Matt Cross and Erick Stevens as a trios group that are feuding with The No Remorse Corps.  God, I hate that name.  What does it even mean?  Are they just going to kick the crap out of people while shouting that they don't feel bad about it?  How bad must their other ideas have been when they were brainstorming what they'd call the Roderick Strong, Davey Richards and Rocky Romero group?  The Sans-Sympathy Squad?  The Guilt-Free Three?  Assassins Without Compassions?  Whatever their ideas were, I think they could have picked any fan from the audience at random and given them five minutes and a free t-shirt and they would have come up with a better name than "No Remorse Corps".
Speaking of factions, it looks like Claudio Castagnoli will not be joining Sweet & Sour Inc.  The story of the Tag Team Championship match at this show is that Claudio had earned a shot at the belts and could choose any partner he wanted.  Naturally, he picked the man with whom he held the titles last year, Chris Hero.  However, after The Kings Of Wrestling lost two straight falls in a best-of-three-falls match, Hero and the rest of Sweet & Sour Inc. went to the back in disgust, leaving Claudio behind.
The match of the night was Bryan Danielson vs Nigel McGuinness, which we were told was being recorded for a future ROH pay-per-view.  It was an amazing match between two of the most talented professional wrestlers in the world, and I'm glad to have been in attendance to see it happen from the second row! 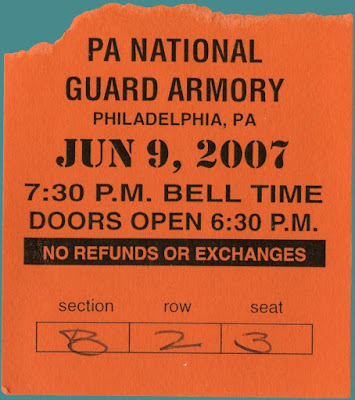 Results:
Update: The match between Bryan Danielson and Nigel McGuinness aired on September 21, 2007 as part of Ring Of Honor's second pay-per-view, Driven.  It was not included in the DVD of the show, which is now available on ROHwrestling.com under the name "Domination".