Movies Under The Rainbow 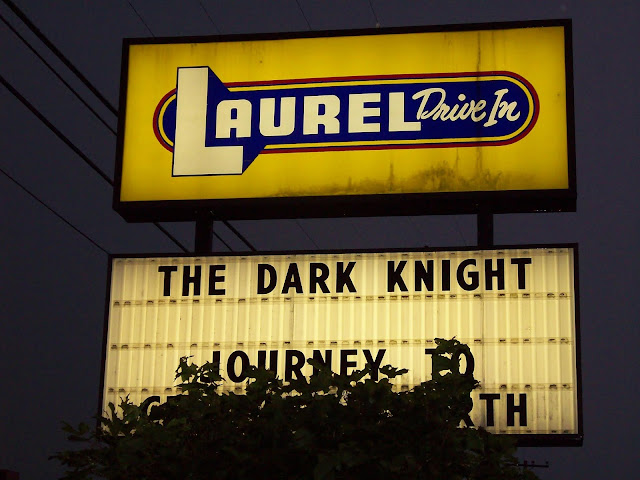 The Dark Knight / Journey To The Center Of The Earth
Laurel Drive-In - Hazleton, PA
I'm not sure if it's was my actual first movie, but my earliest memory of seeing a movie out with my family was at the Laurel Drive-In.  Dad brought me here to see The Karate Kid: Part 2 when I was five years old.  Back then, the Drive-In still had the little speakers hooked up to poles that you would park next to so that you could hear the movie.
This place has been in operation since the 50's and it's still going strong.  Most nights, it's ten bucks per car to see two movies.  They have a great selection of food and snacks, all of which are inexpensive, and it's just a few miles from my house. 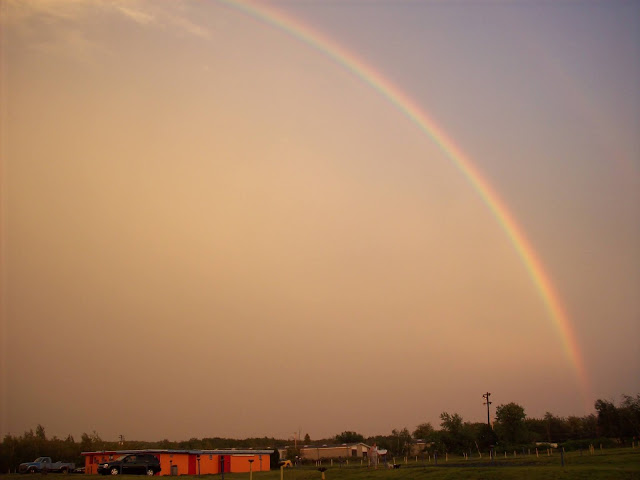 It rained last night when we were at the Transfiguration Church picnic.  Thankfully, it stopped before we got to the Drive-In, and we got to see a beautiful rainbow that arched over the entire parking lot.

This is the inside of the orange building in the photo with the rainbow.  It's where they project the movie from.  It's also the snack bar with a few arcade games.  I think I've played this Ms. Pac-Man machine every time I've seen a movie here for over 20 years. 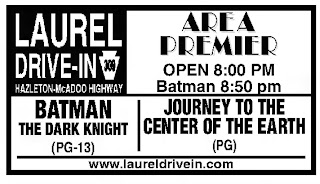 The movies that were playing last night were The Dark Knight and Journey To The Center Of The Earth.  The Dark Knight is the sequel to Batman Begins, and with the exception of The Crow, I think it's my favorite movie based on a comic book that I've ever seen.  I didn't think anyone could ever outdo Jack Nicholson as The Joker, but the late Heath Ledger delivered a performance that is second to none.
Journey To The Center Of The Earth was a good family adventure film.  It's not the kind of thing I'm likely to want to watch again, but I'm glad to have seen it.  Brendan Fraser was solid, as always.  I've never read the book, so I don't know how far it strays from the source material, but it was enjoyable.  I will say that even watching this on a 2-D drive-in screen, it was pretty obvious which scenes were shot entirely for the purpose of showing off the 3-D special effects.  It didn't ruin the experience or anything, but it was very noticeable.