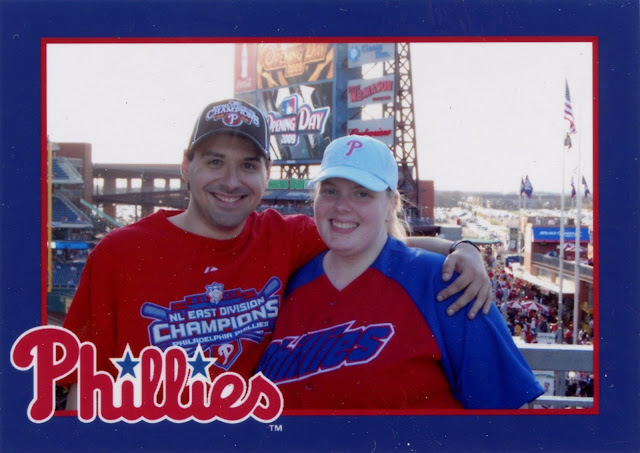 Not counting the West Palm Beach Expos in the Florida State League, this was my first time seeing a game on Opening Day.  The vibe in the park was electric at the start of the game.  The team paraded on a red carpet onto the field, Miss America sang the Anthem, and members of the Army's 82nd Airborne jumped out of a plane to land on the field and deliver the Opening Day ball.  Regrettably, that vibe didn't last long into the game.  Chipper Jones got a single and Brian McCann hit a two run homer in the top of the 1st to give the Braves an early 2-0 lead.  They followed it up in the second with a pair of solo shots from Jeff Francoeur and Jordan Schafer to put the Braves up 4-0, and that's where the score remained until the bottom of the 9th.

After giving up three home runs in the first two innings of the season, Brett Myers settled down, but so did the Phillies offense.  Derek Lowe gave up only two hits and no walks in 8 innings of work.  When the Braves brought in closer Mike Gonzalez in the bottom of the 9th, the Phillies finally managed to get a rally going.  Eric Bruntlett started off the inning with a pinch hit double.  With one out, Jayson Werth got an RBI single to put the Phillies on the board.  This was followed with a Chase Utley walk.  Things were looking hopeful with runners on 1st and 2nd with one out and the 2008 HR and RBI representing the tying run at the plate.  Unfortunately, the Fightins couldn't capitalize as Gonzalez struck out Ryan Howard and Raúl Ibañez to end the game.