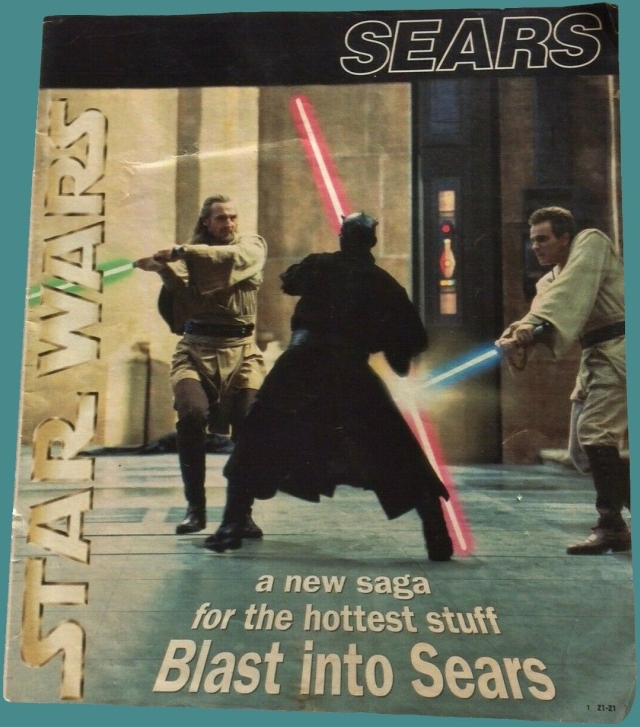 Ten years ago, Star Wars Episode I: The Phantom Menace was released in theaters nationwide.  At the time, it was marketed like crazy, including in store circulars, like this one from Sears.
It's far from a perfect movie.  I think the saga should have started with Anakin Skywalker as a 15 year old angst-filled teenager.  It would have made his relationship with Padme a lot more believable.  I also think Darth Maul was an excellent villain, and I was disappointed when Episode I killed him off before fully developing his character.
I remember that I enjoyed the movie when I first saw it in the theater, but I grew to dislike it shortly thereafter.  I don't know if the marketing blitz made me sick of it or if I was disappointed by its unrealized potential.  However, when I watch it now, I can more fully appreciate it for what it is.  The plot is centered heavily on three things: the pod race on Tatooine, the battle of Naboo, and the fight between Qui-Gon/Obi-Wan and Darth Maul, but my favorite scene happens before any of these.  It's the part where Qui-Gon is sitting outside of the Skywalker's home at night - when he tests Anakin's blood and talks with Obi-Wan on the communicator.  I can't put my finger on why, but I lose myself in the atmosphere of that scene.  It makes me feel like I'm there on Tatooine, with the cool desert night air and the entire Star Wars saga waiting to unfold.