Still Annoyed That I Didn't Get That Steak 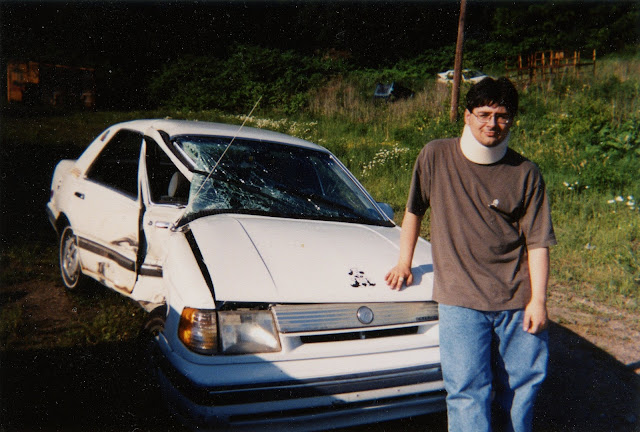 Writing about that stop sign that I got autographed at the ECW show got me thinking about the accident that led to that sign coming into my possession.  It happened less than a month before my 19th birthday on June 8th, 1999. 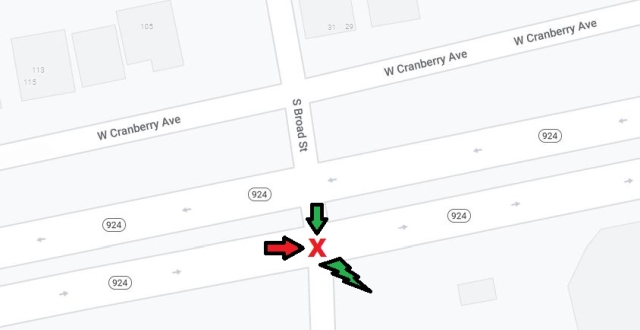 I was on the way to my girlfriend's house to pick her up.  Bonanza Steakhouse was having an all-you-can-eat steak deal, so the plan was to stop there there for dinner and then to go see a movie.  That never happened, because as I was driving down South Broad Street across Route 924, a pickup truck that was speeding north on Route 924 towards Hazleton blew through a red light and smashed into the passenger side of my car.

That bit in the caption about me initially refusing treatment is true.  Here's what happened:  When the truck hit me, my car kind of ricocheted into a chain link fence that surrounded a PennDOT equipment storage yard.  From my perspective, I hit the fence which brought my car to a stop, and I got out of the car a few seconds later.  However it wasn't until later that night that I realized that there was a crowd of people around me by the time I got out of the car, so I had been unconscious for a period of time.  I'm not sure how long, but I'm guessing that it must have been at least five minutes because there were quite a few folks standing there on the side of the road.
As soon as I got out of the car, a dude ran toward me and told me to lay down while he held my neck.  I didn't know what the big deal was, but again, from my perspective, this all happened in a matter of seconds.  From their perspective, it was a few minutes with no movement coming from the driver of the white Mercury Topaz.  I also didn't realize that my head was gushing blood.  So when someone first told me that the ambulance had arrived, I said "naah, I'm alright".  The dude who was holding my neck in place pointed out that I lost a good amount of blood, so I reconsidered and was brought to the hospital.

It may not have hurt in the moment, but I was pretty damn sore by the time we got to the hospital, and for a good month or two afterward.  They stitched me up, gave me some good pain meds and a neck brace, and they took some x-rays.  I was pretty lucky to have not broken any bones, but I was even luckier that I was on my way to pick up my girlfriend instead of on my way to Bonanza after picking her up.  The gash where I lost all of the blood was on the right hand side of my skull, which was the side of the impact from the pickup truck.  It hit my passenger side door.
Now, scroll up and take a look at my car after the accident and imagine if someone was sitting in the passenger seat, or if my car was turned around headed the other direction.  I was told at the hospital that if I had a passenger, they would have been killed on impact, and if I was headed in the other direction and the truck had hit the driver's side door, I would have been dead.
I may have missed out on all-you-can-eat steak, but let me tell you, my birthday cake tasted a whole lot better that year.