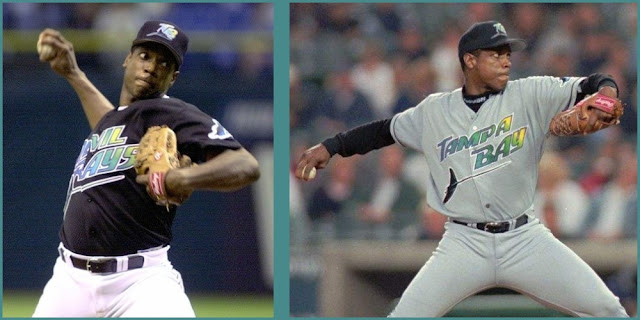 Dwight Gooden
Tampa Bay Devil Rays (2000)
The Devil Rays had terrible luck with starting pitchers in the third year of the franchise.  In January, they signed veteran starter Juan Guzman to a two year contract to join team ace Wilson Alvarez at the top of their rotation.  Things were looking positive, but then the season started and everything went wrong.  Wilson Alvarez injured his shoulder during Spring Training and began the season on the disabled list, and his injuries required arthroscopic shoulder surgery which caused him to miss the entire 2000 and 2001 seasons.  As bad as that sounds, Juan Guzman's fate was even worse.  On the same day that Dwight Gooden made his only start for the Astros, Guzman made his only start for the Devil Rays, and it would be his final appearance in an MLB game.  He gave up 8 runs on 7 hits in 1 ⅔ innings of work against the Cleveland Indians, including home runs to Omar Vizquel and Jim Thome.  He made several minor league rehab appearances in 2000 and 2001, but never again made it to the big leagues.
With their top two starters out of commission after just the fifth game of the season, the Devil Rays purchased the contract of Dwight Gooden from the Houston Astros.  Doc was impressive in his first start for Tampa Bay, which was ten years ago today. He gave up just four hits in six shutout innings against the Detroit Tigers, and he earned his first victory of the season.  Although he would go 2-0 before the end of April, his Devil Rays debut was the highlight of his time in Tampa Bay.  His ERA ballooned to 6.86 after his ninth start of the season, at which point he was released.

Thankfully, Doc's release from the Devil Rays was not the end of his story.  He returned to the New York Yankees in July working mostly in middle relief, but he also made five spot starts.  Gooden was 4-2 with a 3.36 ERA in the final half season of his career in New York, and he even notched the second and third saves of his career.
Dwight Gooden finished the season with a record of 6-5 combined in his time with the Astros, Devil Rays and Yankees with a respectable 4.54 ERA.  The last innings of his career were pitched in the post-season, which ended in the Yankees 2000 World Series Championship.  To the best of my knowledge, he is the only pitcher to win a championship ring with both the Mets and Yankees.