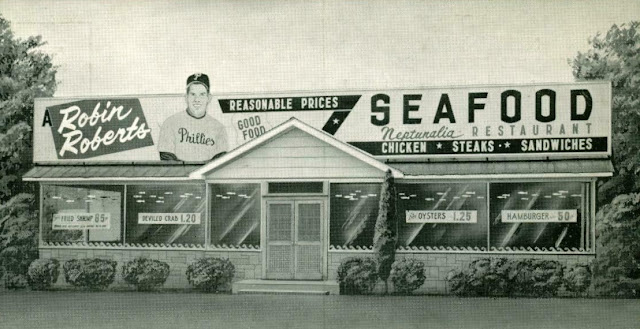 Robin Roberts Neptunalia Seafood Restaurant
Thunderbolt, GA and Savannah, GA
While looking up the career of the late Robin Roberts, I learned that he was the president and part owner of the Neptunalia Seafood Company (makers of Gold King frozen shrimp) since March 1956.  At that point, he still had another 11 years remaining in his MLB career, so the ace anchored the Phillies rotation while simultaneously running a large seafood producer and distributor.  I also found a postcard which shows that he owned two seafood restaurants in Georgia - one that was on East Victory Drive in Thunderbolt and Highway 17 (1 Mile South) in Savannah.
I wasn't able to find out what happened to the restaurants or to the seafood company that supplied their food, but there were a few articles written about Mr. Roberts' business ventures outside of baseball during his playing career.