The Past vs The Present 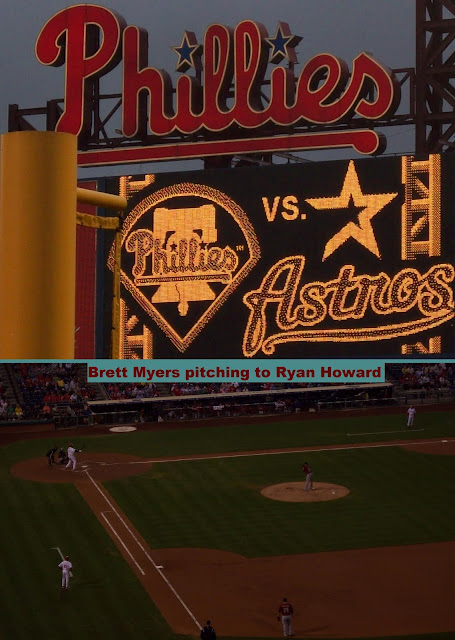 Notes: Seeing former Phillies come back to Citizen's Bank Park on their new teams has always been something I look forward to.  Seeing Joe Blanton pitch against Brett Myers, two members of the 2008 World Champion Phillies rotation going head-to-head, is like a dream come true.

Another former Phillie, Michael Bourn, started off the game strong for the Astros.  He singled off of Blanton, stole second, and then scored on a sacrifice fly by Hunter Pence.  The Phillies tied the game in the third when Carlos Ruiz hit his sixth home run of the season.  They took the lead later in the inning after Chase Utley hit an RBI single that allowed Jimmy Rollins to score.

In the sixth, Bourn again singled and stole second, but he didn't score this time.  Rookie phenom Domonic Brown, who made his major league debut less than a month ago, came into the game to pinch hit for Joe Blanton in the 7th to start a rally, but Shane Victorino hit into a double play to end the inning.

The game got away from the us in the eighth when another former Phillie, Jason Michaels, singled off of Ryan Madson.  Bourn came back to haunt us again in a controversial moment when he bunted to put runners on first and second.  We were having dinner at Harry The K's by this point in the game, so I was pretty far from the action, but on the monitors, it looked to me like Ryan Howard tagged him out.  Besides that, Bourn ran a mile outside of the basepath which should have resulted in an out even if Howard missed the tag, but the umpire called him safe.  Charlie Manual agreed with me (and every fan in attendance, and every sensible fan watching at home), but he was ejected from the game for arguing with the ump.  It was a ridiculous call, and it led to the Astros win.  Carlos Lee singled with two outs to score Michaels and Bourn to give the Astros a 3 - 2 lead which they held for the win.

The first base umpire was the real MVP of the game for Houston, but if you're looking solely at the Astros lineup, the 2005-2006 Phillies (Brett Myers, Michael Bourn and Jason Michaels) defeated the 2010 Phillies last night. 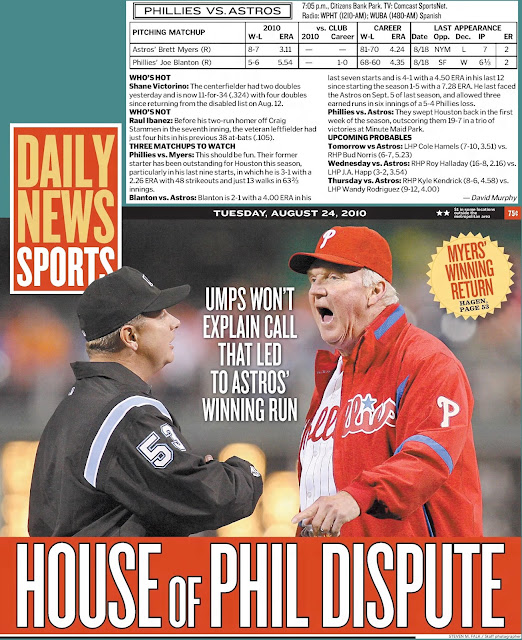 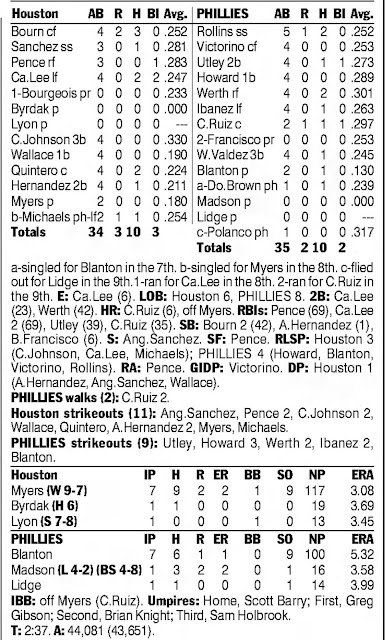