Memories Of The Blue Comet 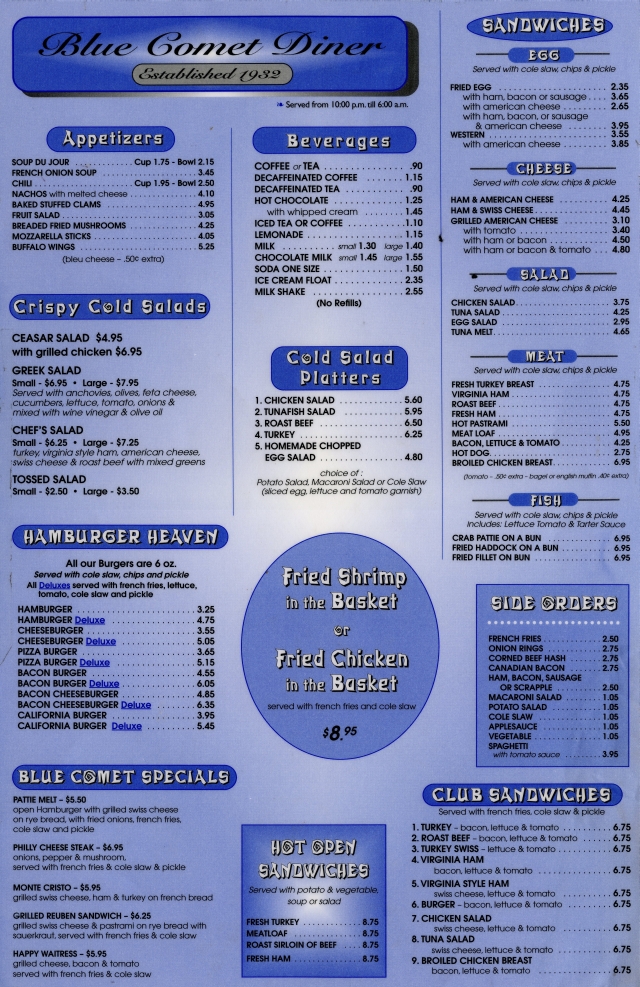 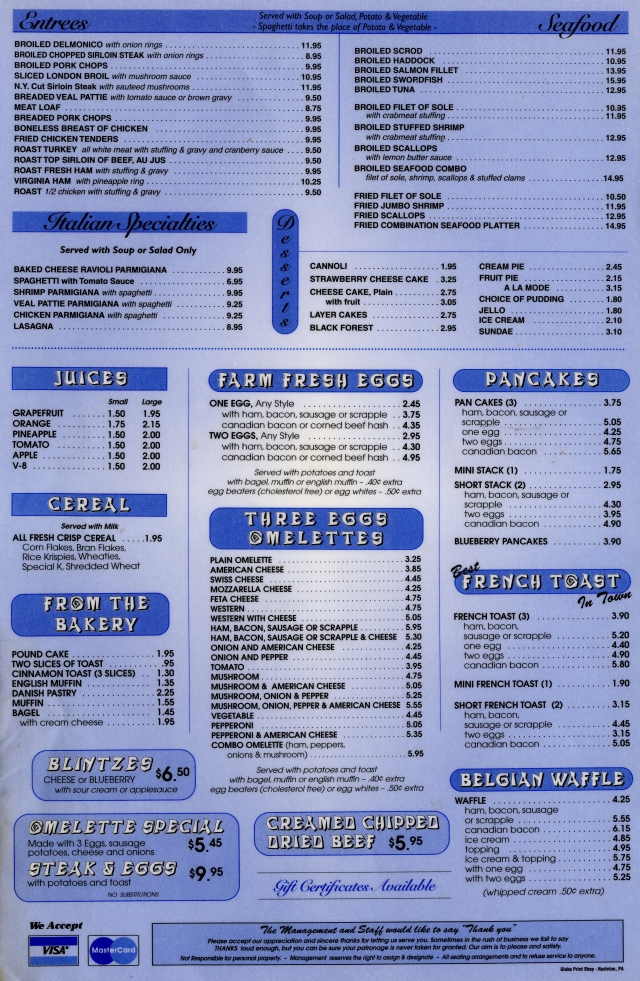 Blue Comet Diner menu
Hazleton, PA
I have a lot of happy memories at the Blue Comet Diner.  When I was growing up, my grandparents and I had dinner here every Saturday evening after church.  My clearest memory of the place was the smell.  I would bet that there was enough second hand smoke that breathing the air at your table during dinner would be equivalent to smoking at least one cigarette.  It may sound like I'm talking bad about the place, but not at all.  The 80's were a very different time.  Almost every adult I knew when I was a kid smoked, so it wasn't an uncommon smell anywhere in town.  For some reason though, I associate it strongly with the diner.  When I think of it, I can call up a memory of the way that it smelled without even trying.

The food there was always good.  My favorite things to order were chicken fingers and breaded shrimp.  They used to have one of those pie and cake glass cases that had stacks of desserts that rotated.  Everything looked delicious, but I don't remember ever trying anything other than rice pudding and a big piece of coconut cream pie.  It was delicious!

They used to have video poker machines and a Ms. Pac-Man cabinet in the entrance way.  I played at least one game of Ms. Pac-Man every time we ate there while Grandma, Grandpa and Nana took turns playing video poker.  Even though they were labeled "for entertainment only", the machines paid off.  I'm not sure exactly how many points you had to score to get a payoff, but I remember that when one of my family members won, they'd go into the restaurant to get the cashier to come out and verify the score.  They'd go back to the counter and pay cash out of the register.  When I was a kid, I had no idea that this was illegal gambling.  No one made any attempt at all to hide it.  That was Hazleton in the 20th century.

When I was a teenager, the 24 hour diner became a late night hang out where friends and I would drink coffee and talk about music, or where I'd grab a burger and fries with my girlfriend after a movie.  This menu is from those days - either the late 90's or early 2000's.

I have more happy memories over the years here than any other restaurant.  I've been here hundreds of times with family and friends, and I'm sure I'm not the only person who has so many fond memories of the place.  It's been there since 1932 and has been an iconic part of Hazleton for generations.  Sadly, that came to an end as the Blue Comet closed its doors for the last time today.  It will be missed.