I Hope That You Have Found Peace 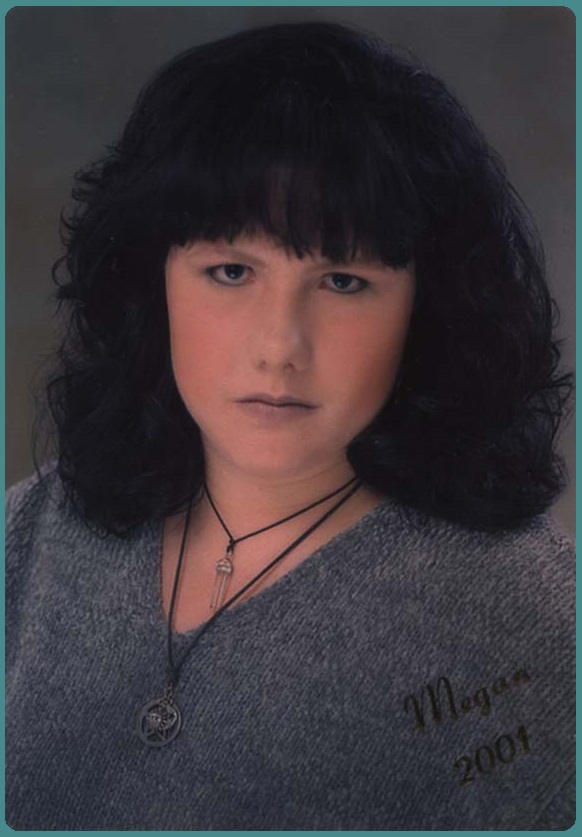 Megan Elizabeth Jais
1983 - 2011
I met Megan a few weeks before the terrorist attacks on 9/11/2001.  I was working third shift at Unimart on Rt. 924 outside of Hazleton.  She came into the store with one of her friends, and she and I struck up a conversation and hit it off pretty well.  As it turned out, she was friends with a girl named Margie with whom I was once involved and parted on very good terms with.  Things moved pretty quickly between Megan and I, and before the end of the year, we were living together.
We stayed in a second floor apartment on Poplar Street for the first couple of months, but we moved to Brandonville when the end of a row home became available to rent.  Margie and her boyfriend Brad lived in the center apartment of that row home, so it was a comfortable arrangement.  The rent was cheap, we had friends next door, and life was pretty good... some of the time.  Both she and I were dealing with mental health issues that were never properly diagnosed or treated, and it led to a lot of conflict between us.  Those mental health issues also led to a lot of impulsive behavior, including a courthouse wedding that absolutely no one else (other than maybe Brad and Margie) thought was a good idea.
The marriage didn't last long.  Megan and I split up in July 2002, and it was not a pretty scene.  I ended up leaving the state and living in Omaha, Nebraska for a short time.  When I came back to Pennsylvania, I had completely lost touch with her, but as fate would have it, she returned to college at the same time that I did, and we had a class together in 2007.  By this point, her name was Megan Morgan.  She married a man named John who I never met, and she had a son and a daughter who I did get to meet.  I forget the name of her son, but I know her daughter's name was Athena Lilliona.  The reason I remember that so clearly is that when she and I were married, we talked about what we would name our children if we had them, and she always had her heart set on Athena Lilliona.  Megan was Wiccan and the name had something to do with her faith, but I was far too arrogant and self-absorbed to ever really learn what that connection was.
When Megan and I met again in college, there was zero romantic interest on either side.  She was married.  I was in a happy relationship to a woman that I am now married to, but even if the two of us were single, we knew better.  We had been down that road together before and there was absolutely no misunderstanding - we were not at all a good match for one another.  However, one thing we did have was a very similar sense of humor.  It's more than that, but it's hard to explain.  Sometimes you meet someone who you can just play off of perfectly.  Our conversations went to weird places, and goofy ideas and banter would bounce back and forth between us effortlessly.  Even back in 2001 and 2002 when we were together, we were pretty much either laughing or fighting.  There was seldom anything in between.
I lost touch with her again after I transferred to Wilkes University, but before that point, I knew that things weren't going well with her husband, or for her life in general.  I don't know all of the details, and out of respect for everyone involved, I won't share the thing that I am aware of.  I will say that she lived through many very bad things in a short span of time that would be devastating to anyone.  Those things combined with her mental health were more than she could overcome, and as a result, she is no longer with us.  Megan died on September 8th, 2011.
In both my own life and the lives of others that I've known, it's been my experience that someone's mental health is rarely taken seriously by the friends and family of the sufferer unless the side effects of their mental illness become an inconvenience for others.  I've heard many people over the years say in a snide and dismissive tone that someone "needs help".  The phrase itself has become a form of insult.  I'm sure everyone has heard it before - with phrases like "You're sick, you know that?  You need mental help!" said in anger.  Could you imagine someone taking that same angry tone with someone who is suffering from cancer, or heart disease, or diabetes, or any other form of illness?
The sad truth is that even if it's said sincerely, getting "help" for a mental health concern isn't always possible.  Even if it wasn't cost prohibitive for millions of sufferers, the "help" that is available isn't always helpful.  There are medications, but they don't always work.  In some cases, they make the problem worse.  There's counseling and therapy, but that's far from a cure.  Under the best of circumstances, a person seeking help is lucky enough to find a therapist or psychologist that they trust, and who they can connect with, and who gives a damn, but that doesn't mean they've got the ability to articulate their feelings in a way that will lead to the help that they need.  Far too often, a person suffering from a mental health issue finds themselves facing their demons alone, and those stories usually don't have a happy ending.
I don't have any answers.  I wish that I did.  Megan was a good person underneath it all, and she deserved a better life than the one she had.  She deserved better people in her life than I was to her.  Her story should not have ended at 28 years old.  I'm sorry, Megan.