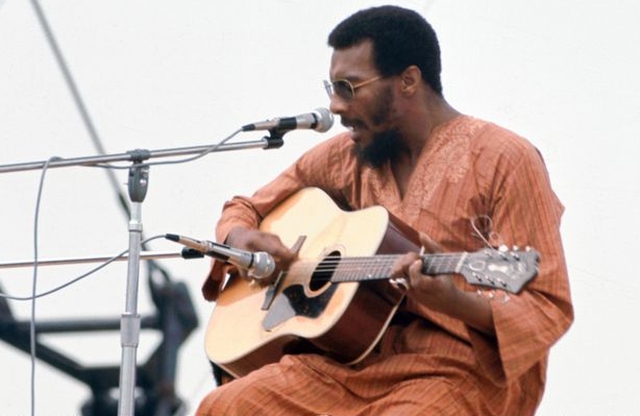 "I looked at the poster for that first show and it said, 'Richie Havens -- folk/jazz singer.' I went, 'Really? Is that what I am? Is that what I do?' I just went into any situation the put me in, and people seemed to like it."

The wold has lost a true legend.  Richie Havens, a musician who raised the world's consciousness and who brought a little peace and happiness to millions has passed away yesterday of a heart attack.  He was 72 years old.

Mr. Havens became known all over the world when he opened at Woodstock.  He was originally scheduled to go on fifth and play a 40 minute set, but 5 pm came on August 15th and the other performers were stuck in traffic.  He ended up playing for three hours.  Festival organizers kept asking him to go back out and keep singing because no one else was ready to take the stage.  After two and a half hours, he performed all of the songs he knew, including cover songs.  With nothing left to play, he drew on some of the lyrics from an 1899 spiritual hymn called "Sometimes I Feel Like A Motherless Child" and improvised Freedom on the spot, live and in front of a crowd of 400,000 fans.  It became an iconic song that captured the spirit of Woodstock and of the 60's.