Before Hells Bells Ever Rang 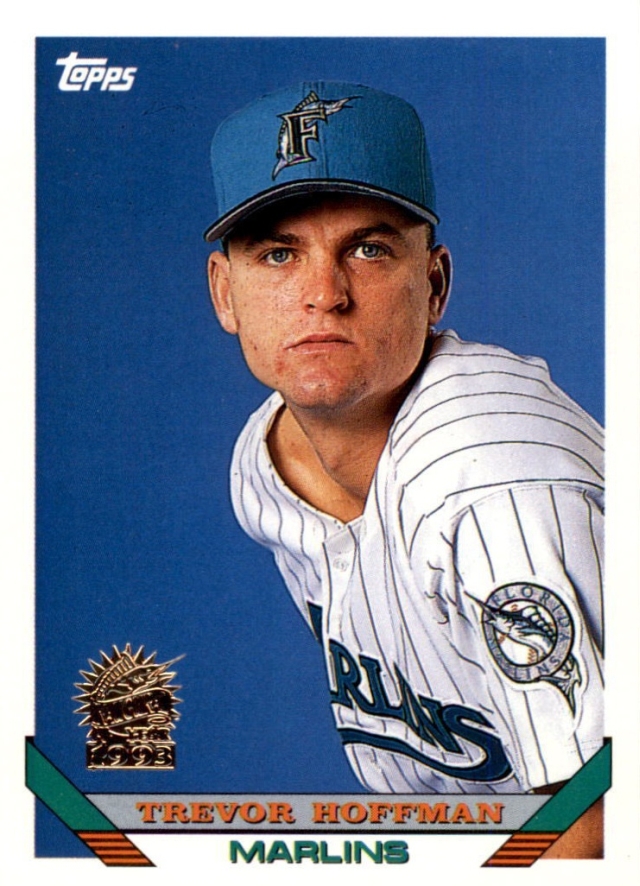 Trevor Hoffman
1993 Topps - Card #572
Twenty years ago today, one of the most dominant relief pitchers in the history of the game was traded by the Florida Marlins to the San Diego Padres.  At the time, it was seen as little more than a part of the Padres salary dump.  Throughout the summer of '93, the Padres traded Roger Mason to the Phillies, Fred McGriff to the Braves and Gary Sheffield in this deal to the Marlins.
These deals were highly criticized at the time because it was obvious that it was a purely cost-cutting move.  The Padres traded away their best and highest paid players and the general consensus was that they didn't get much in return.  The only prospect that looked like they might develop into a star player was Melvin Nieves who came from the Braves, and he really didn't pan out.
Trevor Hoffman wasn't really considered much of a prospect.  He was originally drafted as a shortstop by the Cincinnati Reds in 1989.  He was converted into a pitcher in their minor league system, but the club left him unprotected during the 1992 Expansion Draft, and he was taken by the Marlins with the 8th pick.  Dad and I were living in Boynton Beach at the time, and we went to quite a few Marlins games in their inaugural season, so we got to see him pitch twice before the trade.  On May 19th, 1993, we saw him come into the game in the 8th inning against the Phillies, and a few weeks later on June 11th, he pitched the final two innings of the Marlins 11-3 win against the Pittsburgh Pirates.
The future closer would go on to spend the next 15+ years with the Padres before moving on to spend the last two years of his career with the Milwaukee Brewers.  He retired after the 2010 season with a remarkable 601 career saves (second only to Mariano Rivera for most of all-time).  He was a seven time All-Star, and an almost certain induction to the Hall of Fame.