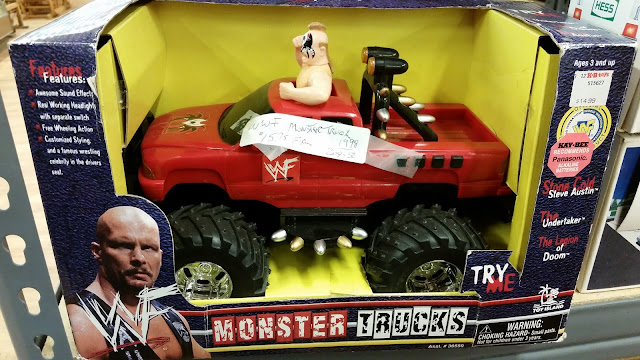 WWF Monster Trucks
Toy Island (1998)
This is a pretty interesting toy because it has both the old "WWF New Generation" logo from the mid 90's and the newer "WWF Attitude" logo on the same package.  I can't remember ever seeing that before.  It also features Road Warrior Animal who is thankfully not shown in the horrible LOD 2000 gimmick that he was using on television at the time.
While I think this is pretty cool, it's not the kind of thing I typically purchase.  I kind of wish I did though.  The vendor at Black Diamond was selling this for $15.95, but someone has one on eBay right now for over a hundred bucks, and it doesn't look like it's in as good of condition as this one.  I don't want to get started trying to flip merchandise on the internet, and I have no idea if there really is anyone out there willing to spend that much on a toy wrestling truck, but a quick hundred bucks is hard to ignore.