The Offspring
West Palm Beach Auditorium - March 11, 1995
Twenty years ago today, I went to my first concert. The Offspring released Smash the year before, and they were in the middle of what would be a nearly two year tour for the album that broke them into the mainstream.  Quicksand and No Use For A Name were the opening acts.

The show was on a Saturday night, and nearly every kid in school on Monday was wearing the red concert shirt. In the infinite wisdom of a 14 year old boy, I didn't buy the tour shirt, opting instead for the one that had lyrics from the song Bad Habit in large letters on the back.  Do you think Palm Beach Gardens High School was happy to allow that?  Have a look at the shirt and let me know. 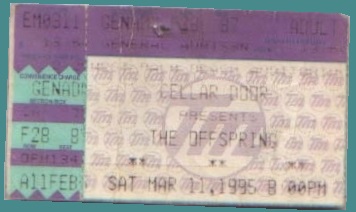