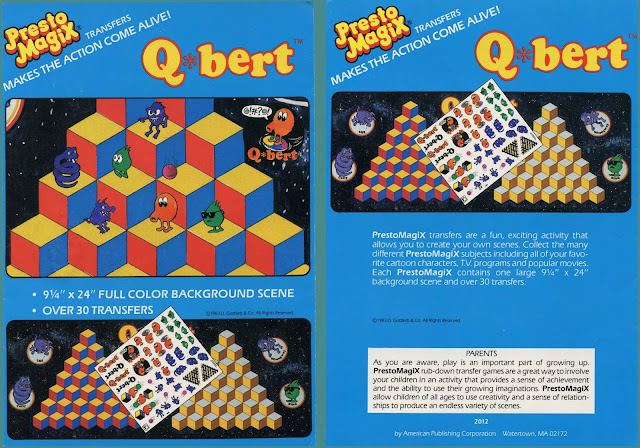 Q*Bert
Presto Magix Transfers
American Publishing Corporation (1983)
I found this last month at Black Diamond Antiques & Collectibles in the Schuylkill Mall.  When this was available for sale at stores in 1983, Q*Bert was a cultural phenomenon.  It was one of the hottest games at the arcade, and the character was marketed like crazy with countless toys, games, and other merchandise.  The game characters even became television stars on the Saturday Supercade cartoon series on CBS.

The toy folded out like a pamphlet to make a two foot long background with two Q*Bert pyramids set on a field of starts.  Artwork of the game characters are placed around the pyramids with the star of the game riding on his flying disc at the center.  The bottom left hand corner has a box where the little boy or girl could sign their artwork.  This one was mostly unused except for one Q*Bert and one Coily that had been transferred to the pyramid on the right hand side.

The transfer sheet of characters was included.  As expected, the Q*Bert and Coily characters that were transferred to the background were missing from the sheet, but all of the others were there, including Slick, Wrongway, Sam, Ugg, duplicates of Coily, and a generous amount of Q*Bert in various poses.  There were also a few Q*Bert logos and, for some reason, a couple of miniature pyramids, which I'm not sure where they were supposed to fit into the background.  I wish they made a little Q*Bert arcade machine for the transfer sheet, but it's still a really cool collection of characters. 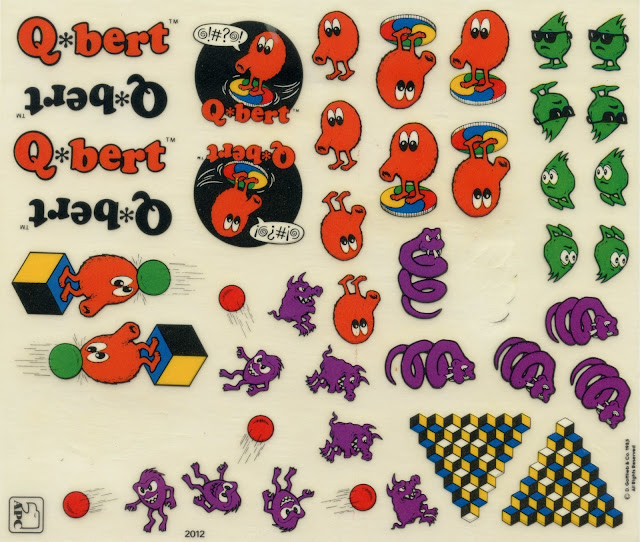