A Great Blog From A Fellow Phillies fan 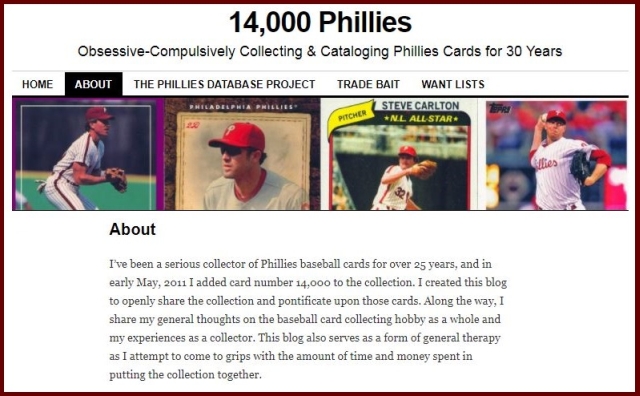 14,000 Phillies
2011 - 2015
It saddens me to learn that one of my favorite Phillies baseball card blogs is moving on from the hobby.  I totally understand.  It's expensive and overwhelming to keep up with, and the business practices of the major card manufacturers leave a lot to be desired.
I made the decision in my adult life to narrow the scope of my collection to only players who have appeared in at least one game for the Phillies at the major league level.  They don't have to be in a Phillies uniform on the card - just so they spent time in their career with the club, even if that time was very brief.  I have made a few exceptions to that rule for my favorite non-Phillies (Hank Aaron, Bill Lee, Ricky Henderson, Nolan Ryan, Ichiro, and a handful of others), but aside from a select few, I've kept to that rule.
Despite this, and despite the fact that I've limited my spending to just a few cards a year, I've found that the time, money and space that they take up are ebbing very close to being too much to deal with.  It might be a different story if I had someone to share them with or to pass them down to, but I don't.  I'm sure there will come a day when I reach the same point that the author of 14,000 is at.  That day isn't today, but I'm thinking it will probably be sooner than I expect.
Happy trails, Matt.  Thank you for all of the time and effort you put into 14,000 Phillies and for sharing your thoughts and your collection.