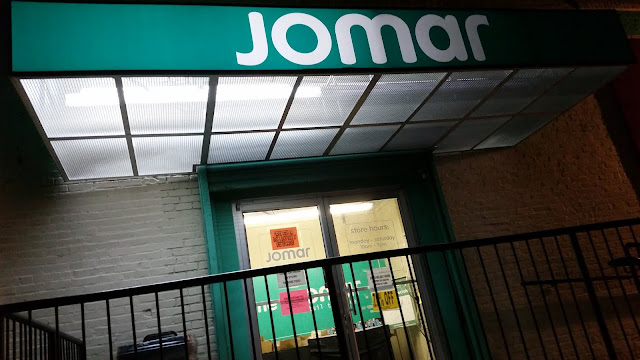 Jomar
Jackson Street - Philadelphia, PA
There's enough bizarre bootleg, foreign and new old stock merchandise in this store to create a separate blog.  Earlier, I showed the Bear Police and Wind-Up Fish from 1994 B.C. toys.  Here are the best of the rest: 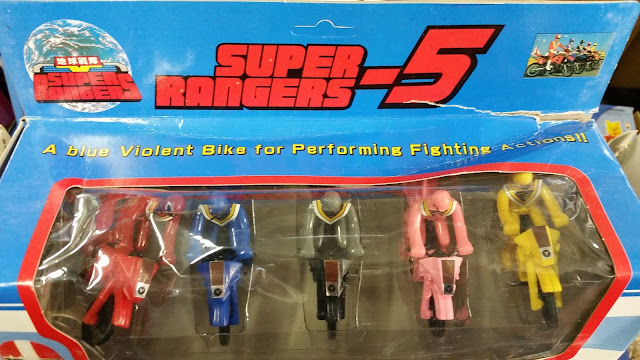 This Power Rangers knock-off includes five "Super Rangers" on motorcycles.  I'm not sure what makes the blue one more violent and capable of performing fighting actions than the others. 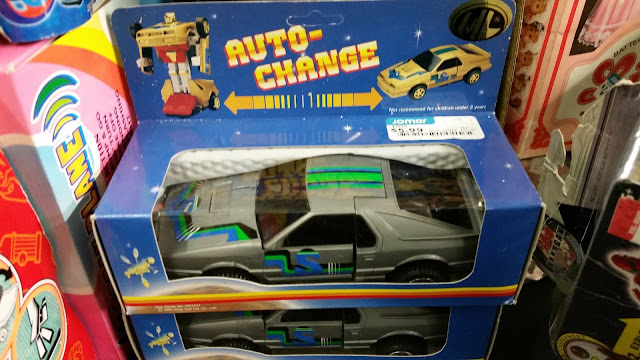 When I was growing up in the 80's, most kids loved Transformers.  There was a smaller, but loyal fanbase for the GoBots.  There were also weird kids like myself who liked the McDonald's Changeables.  However, I don't remember anyone going bonkers over Auto-Change toys. 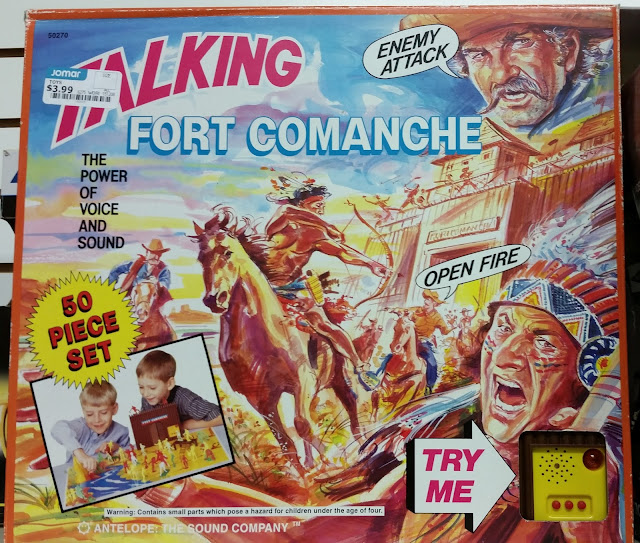 Hey kids!  How would you like to spend some time re-enacting the brutal slaughter of Native Americans with the power of voice and sound?  Well, get ready to open fire on the enemy attack and you, too, can enjoy this 50 piece set as much as the very white children pictured on the box.  Be on the lookout for our next product, the Hawaiian Invasion Playset where you can turn a peaceful tropical kingdom into a theme park for the wealthy. 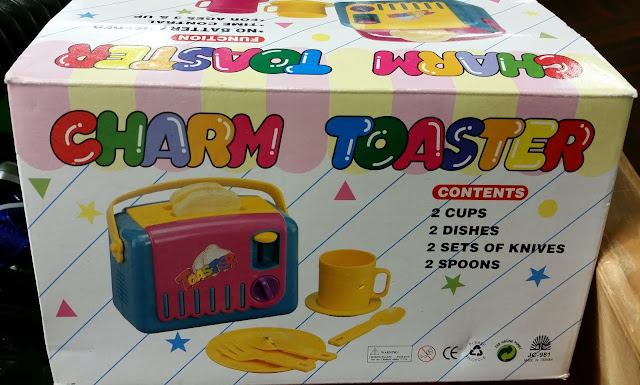 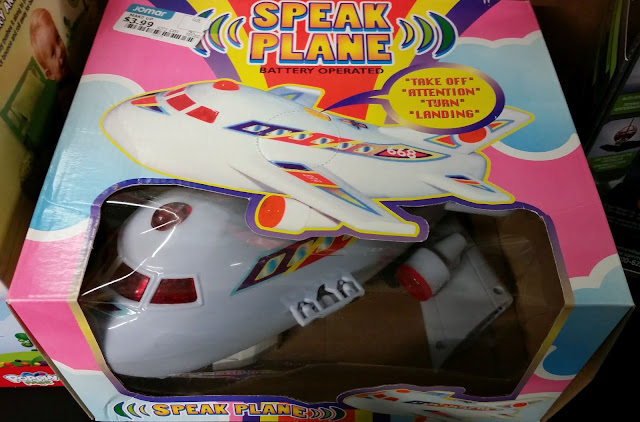 Flight 668 ready for takeoff.  Our in-flight service will be serving Charm Toast. 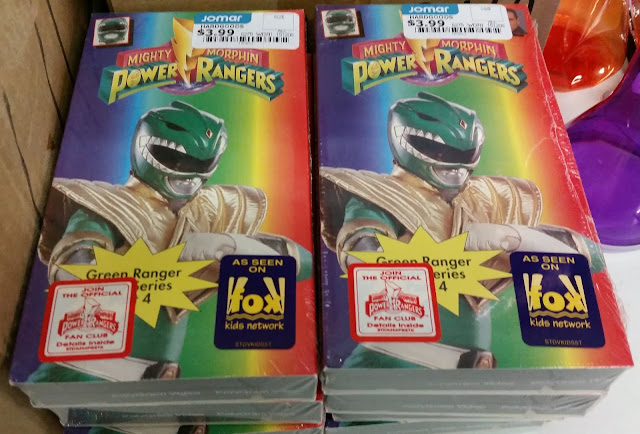 I was born just a few years too soon to catch on to the Mighty Morphin Power Rangers phenomenon, but I would have passed on these even if they did give me warm, nostalgic feelings.  New old stock VHS tapes are cool and all, but four bucks seems a little stiff.  I worked in the electronics department of a K-Mart back in '97 and I think we were selling these cheaper even then. 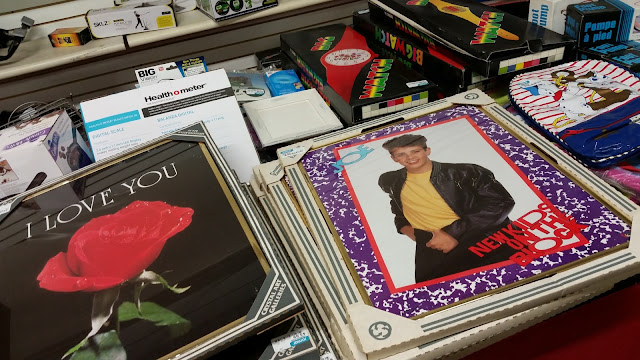 This seemed to be the carnival game prize section of Jomar.  These are exactly the kind of giant posters in cheap plastic frames that you can win by playing bingo or throwing darts at a balloon at the Bloomsburg Fair.  The same goes for the giant novelty watches that are made to hang on the wall.

Judging by the Joey McIntyre poster, I'd say that this merchandise went on tour at various county fairs and amusement parks in the late 80's or early 90's before landing in a warehouse for a couple of decades.  It must be said that for being a quarter century old, these were in pretty good shape.  They look brand new. 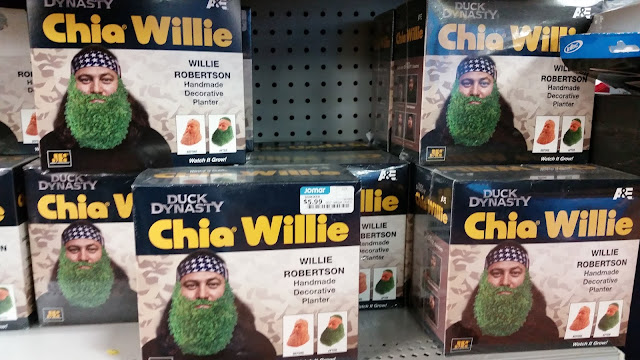 A product called "Chia Willie" could have been worse, I suppose.  I've never watched Duck Dynasty, so I have no idea who Willie Robertson is or what he does that has earned him the honor of being immortalized as a ceramic head with a chia sprout beard.  I suspect that, like most Chia Pets, plenty of these were given as gifts on Christmas morning.  You know the drill.  Mom unwraps her Chia Pet, there are smiles, laughter, and a photo holding the box, and then the unopened box goes into the attic where it is rediscovered 20 years later and sold at a yard sale for a buck. 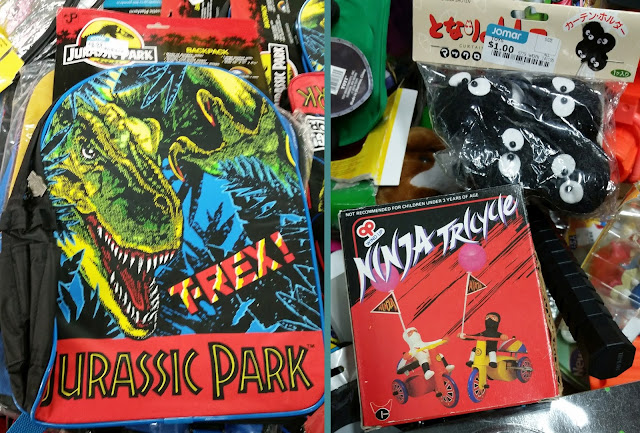 These are the items that proved too nerdy (and cheap) to resist.  I bought a new old stock Jurassic Park bookbag from 1993, a bag of what looks like soot sprites from Spirited Away, and my personal favorite, a wind-up Ninja Tricycle.  You'll be seeing more of that in a future post after I take it out of the box.