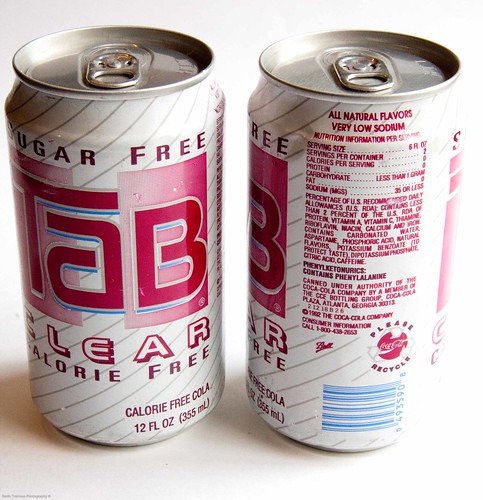 Tab Clear
The Coca-Cola Company (1993)
The return of Crystal Pepsi brought back fond childhood memories of another see-through soda from the mid-90's.  Most of the references you'll see online about Clear Tab have to do with the speculation that it was a kamikaze product that Coca-Cola introduced in an effort to eliminate Crystal Pepsi.  The thought process behind this theory is that by using their secondary brand to compete with Crystal Pepsi, they gave consumers the impression that Crystal Pepsi was an inferior product, and by using a diet brand, consumers would think of Crystal Pepsi's as a diet soda (in reality, it came in regular and diet).  I don't know if any of that is true, but I do know two things about Tab Clear: my father loved it, and we drank it exclusively throughout the summer of 1993.

My dad and I lived in South Florida with my stepmother and stepsister when Clear Tab was released.  Dad is diabetic, and Tab was his favorite soda.  He had an opportunity to try Clear Tab at a demo table in the grocery store, and they gave him a flyer with a coupon for a free 12 pack.  It also allowed consumers to earn more free soda for referrals.  For every address of a friend or family member that you gave to Coca-Cola, both you and whoever's address you gave would get a coupon for a free 12 pack.

Dad gave the address of practically everyone he ever met, and because there were limits on how many referrals they allowed each person to submit, he used every variation of the names of me, my stepmom, my stepsister and himself.  By the time he was done, we had about 40 cases of Clear Tab cola.  The pantry in the kitchen was filled with the stuff, with extra cases stored in the garage.  It lasted throughout the summer and fall and almost until Christmas.