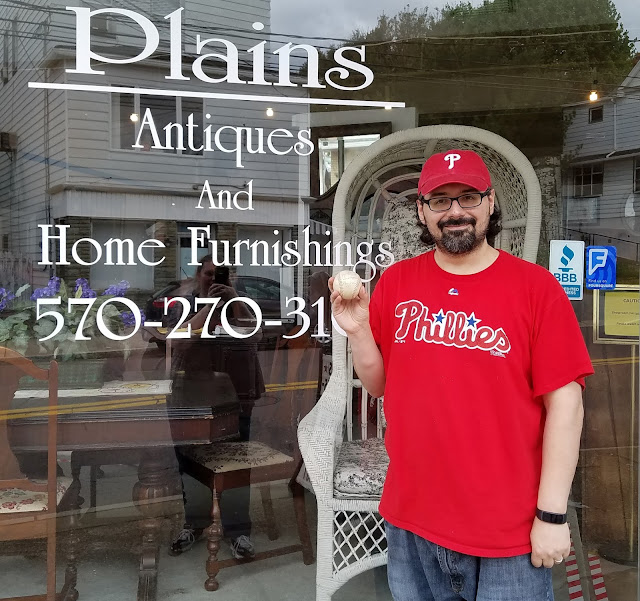 We found this baseball for sale at Plains Antiques & Home Furnishings in Pennsylvania.   Right off the bat, I noticed the Richie Ashburn and Harry Kalas autographs (as well as the reasonable price tag) and decided that this ball was coming home with us.  After we got home, we began to do a little investigating on the other signatures on the ball. 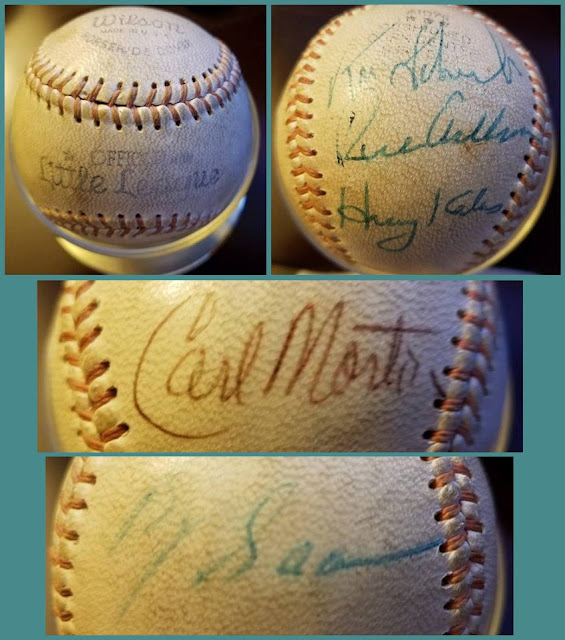 Ron Schueler: Right hand pitcher who played for the Phillies from 1974 - 1976. He was with the Phillies for most of Spring Training in 1977, but nine days before their first regular season game, the Phillies sold Schueler's contract to the Minnesota Twins.

Carl Morton: Right handed pitcher who was one of the players taken by the Montreal Expos in the 1968 Expansion Draft. He went on to win the Rookie of the Year in 1970. In total, he had an 8 year Major League career - the first half with the Expos and the rest with the Braves. Odd that he would be on a baseball with Ron Schueler and the Phillies broadcast team, until we did a bit more digging.

We found that Morton signed with the Phillies as a free agent early in 1977 (the date is uncertain, but Baseball-Reference.com estimates that this occurred "sometime in May"). Morton would go on to spend the season in Triple A with the Oklahoma City 89'ers and was not brought up to Philadelphia. The Phillies released him on September 14th that same year.

So, what were the circumstances that could have led to Schueler and Morton both signing this ball? There are two possibilities that seem to be the most likely:


I'll never know for sure, but it's a heck of a puzzle that resulted in these two random ships that passed in the night in the Phillies clubhouse to sign the same ball. Schueler would go on to pitch for the Twins in '77 and the White Sox in '78 - '79 before retiring from the game. Morton never made it back to the Major Leagues, and he died of a heart attack in 1983 before his 40th birthday.

As for the last signature... that one was tough. It's the most faded of the five autographs, and it looks very unusual. It took us a little bit of looking through the Phillies and 89ers rosters of the late 70's without seeing any similar names, my dad finally cracked the code...

Ashburn, Kalas and Saam worked the Phillies broadcast booth together starting in 1970. Saam retired in 1976, but he appeared from time to time in 1977. Ashburn worked the booth until his death in 1997. He was of the most beloved members of the organization, both for his excellence on the field and on the mic. Harry would continue to be the voice of the Phillies, with his final full season ending in the 2008 World Series win. I watched from the stands as Harry threw out the ceremonial first pitch of the Phillies 2009 season. In their first road trip of the 2009 season, Harry The K died in the broadcast booth in Washington D.C. as he prepared to call the Nationals home opener against the Phillies.

So, represented on this ball are two right handed pitchers that met briefly in passing, as well as a lineage of 70 years of Phillies broadcast excellence, which includes a man who began with the team the year before World War II, the Hall Of Fame icon of the franchise whose name is synonymous with Philadelphia baseball, and the voice of the Phillies whose singing of High Hopes still echos in the ballpark.