Turnin' Back The Pages To The Times I Love Best 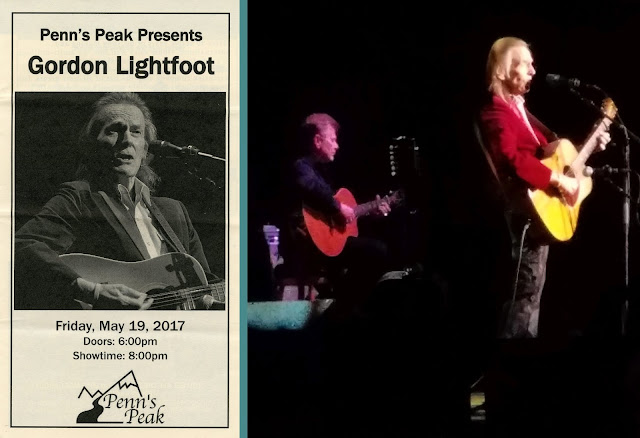 Gordon Lightfoot
Penn's Peak - Jim Thorpe, PA
I truly feel privileged to have had the opportunity to see one of my favorite musicians, and one of the most gifted singer and songwriters of all time perform - the great Gordon Lightfoot.
Unlike a lot of the music that I love, I never owned a Gordon Lightfoot album when I was growing up.  His singles weren't among the songs in the box of 45 records that my mother gave to me, which shaped a lot of my musical interests before Kindergarten.  When I bought CDs in the 90's, I gravitated toward grunge rock, punk, new wave and classic rock, so Mr. Lightfoot's music wasn't in the mix at that point either.  However, the music of Gordon Lightfoot has been a constant presence in the background throughout my life.  I couldn't tell you if I heard them on the radio, or if a member of my family played his records when I was in the room, but I knew his music and I knew it well.  The melody and lyrics of songs like Carefree Highway, Sundown and If You Could Read My Mind were burned into my memory.  I didn't know anything about the man who wrote and sang these beautiful songs, but I could sing along with most of the lyrics before I was out of elementary school.
It wasn't until the late 90's and early 2000's when the internet first became something that could be used for music that I learned about the man behind the music.  In the years that followed, I discovered more of his catalog, and every song had the same strong, but peaceful vibe that had a way of putting my mind at ease.  He's nearly 80 years old, so I didn't think I'd ever get the chance to see him perform.  When I saw he was coming to Jim Thorpe, seeing this show became one of my top priorities. 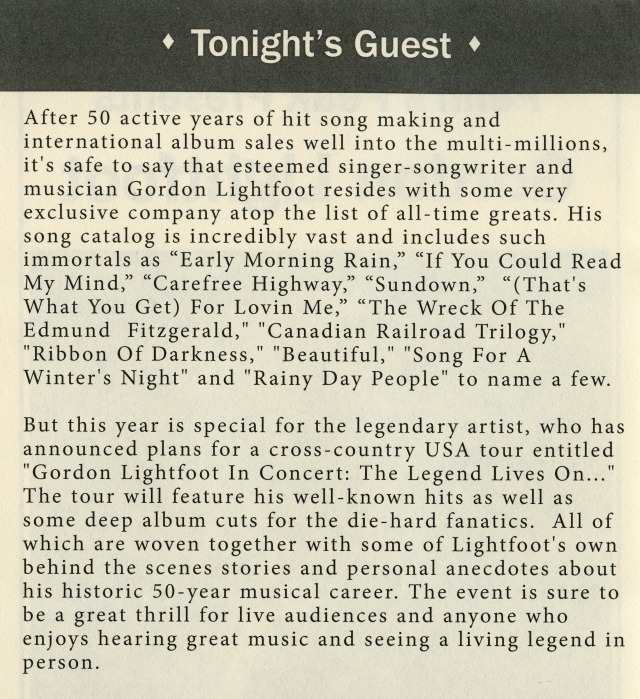 My seats for this show weren't the best.  I had Row A, Seat 1 which looked great when I was ordering the tickets, but it turned out that these seats were far off to the side where the restrooms are.  I'm not sure if the acoustics of Penn's Peak are wonky or if they're using a jet engine to run their bathroom hand dryers, but there were times when I could hear those as loudly as I could hear the guitar.  It's definitely something I'll keep in mind for the future when picking seats if I go back to this venue.  However, even the peculiar addition of a paperless hand dryer as an instrument did little to damper the beautiful music that came from the stage.  I hope that I get to see Mr. Lightfoot perform again sometime.