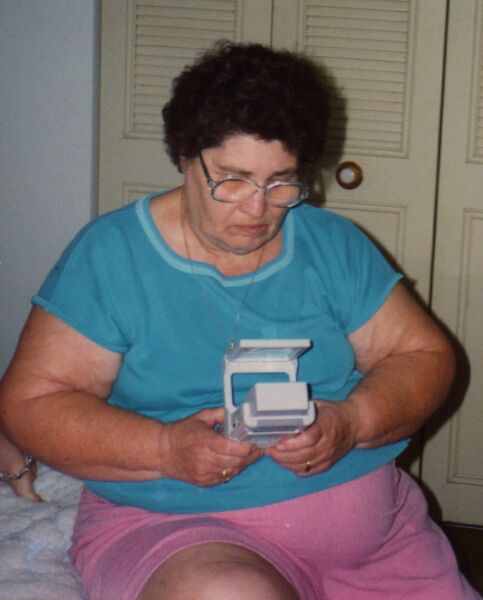 Game Boy Voltron
March 1992
This is a photo of Mrs. Nola (my then-stepmother's mother) playing a pimped out Nintendo Game Boy.  The Game Boy spawned dozens, if not hundreds of third-party peripherals that were designed to add features that the system didn't have.  Some of them improved game play while others didn't, but the one thing they all had in common is that they made your system look like a cluster of random plastic objects jammed together without a hint of elegance.

The system in this photo has a light and a screen magnifier attached to it.  The light wasn't a whole lot brighter than a single bulb from a strand of Christmas tree lights, but if you held the system at just the right angle, you could see part of the screen in the dark and get in some extra game play after bedtime.  The magnifier wasn't much different than the magnifying glass that my Nana used to help her read the newspaper crossword puzzle, but it was housed in a plastic shell that clipped onto the Game Boy and held the glass far enough away from the screen to make the game appear larger.  It looked goofy, but it worked pretty well.