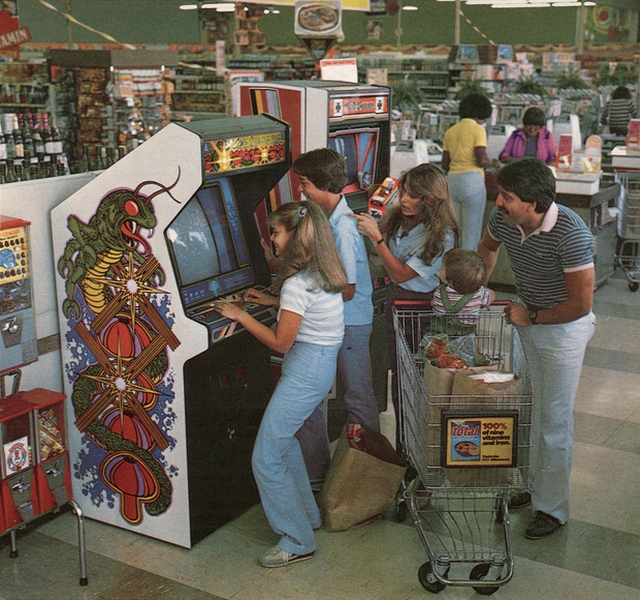 Atari Games arcade advertisement
Grocery Trade publications (1982)
The Arcade Blogger recently shared a full page ad from 1982 that Atari used to entice the owners of grocery stores to put arcade games on their property.  This may seem strange to folks today, but it wasn't at all unusual to see video games all over town back in the late 70's and throughout the 80's.  When I was a kid, I played Ms. Pac Man at the Blue Comet Diner every Saturday when I went out to eat with my grandparents.  Arcade games were as common as soda machines and those quarter machines that gave you a handful of candy or a small toy in a little egg.  They could be found at pizza parlors, restaurants, gas stations, grocery stores, hotels, rest stops, and just about anywhere else you could think of.

Throughout the 90's and 2000's, the began to fade from the landscape.  In 2002, on a trip from Northeast PA to Omaha, I found an Arknoid machine at a gas station.  By this time, arcade games at gas stations had become a rarity, so I spent about 45 minutes taking a break from the road while breaking some bricks on the Taito classic.

This photo was obviously staged, but I absolutely love the way that it captures the arcade gaming phenomenon of the time.  It features a young girl playing Centipede with a Red Baron cabinet in the background.  Her big brother is looking on, with the mother over his shoulder brandishing a box of Tide detergent.  Even her baby brother is looking on from his shopping cart perch, with dad equally fixated by the game.