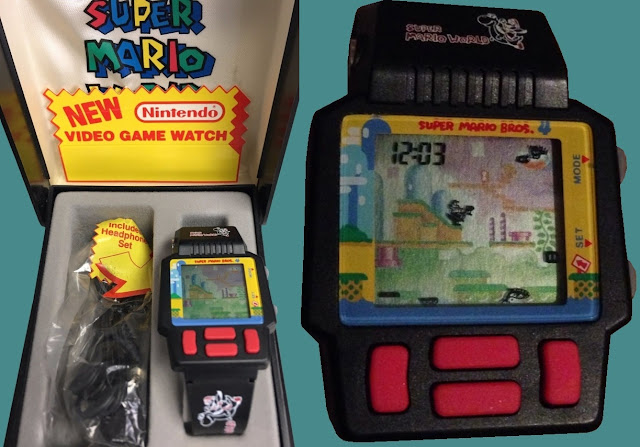 Super Mario Bros. 4: Super Mario World game watch
Nelsonic (1991)
When I was 11 years old, my stepfather's brother gave me this watch as a Christmas present.  It was the only game watch I ever owned, and I played it quite a bit.  In the years that followed, the watch was lost, but I still remember it 26 years later.

Two things stick out in my memory about this watch.  The first, and most obvious, is the earphones.  The black box above the screen is a speaker, and on the left hand side is a headphone jack.  The game also came packaged in a box with an inexpensive set of earphones.  While the LCD game was actually pretty remarkable compared to many of the Tiger Electronics games I've played, the audio was the same blips and beeps as any other game of its kind.  The headphones seemed like overkill even to my 11 year old self, but it was a fun novelty.

The second thing I remember about this game was that the border around the LCD screen identified the game as "Super Mario Bros. 4".  This was the only time I ever saw Super Mario World referred to in this way.  Later in my adult life, I learned that the Super Famicom release in Japan was subtitled "Super Mario Bros. 4".  To the best of my knowledge, this watch was the only Nintendo licensed merchandise to use this title.