Off The Mark Tower 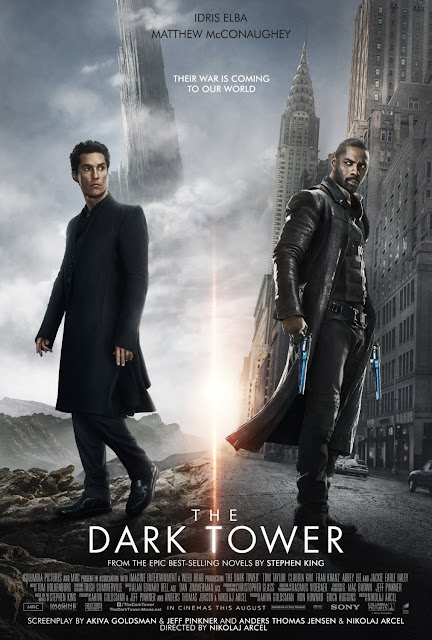 The Dark Tower
Sony Pictures (2017)
I absolutely love The Dark Tower books and the way that it brilliantly ties together nearly all of the Stephen King novels.  When I learned that they were going to attempt to condense seven novels into a single film, I knew it was going to be a train wreck.

First and foremost, the elephant in the room is the decision to cast Idris Elba as Roland.  I could only imagine the uproar across social media if the Blade comics were turned into a movie that starred Jason Statham as Eric Brooks.  If a character's race or gender isn't a key part of the story, I usually don't care if they take creative liberties, but this casting choice all but eliminates a huge part of the dynamic between Roland and Detta Walker, who's mistrust of The Gunslinger is based largely on the fact that he's a "honky mahfah".  So, by miscasting Roland, they've pretty much written out a powerful woman of color who also happens to be one of the only badass action stars I can think of who is in a wheelchair.

As it turns out, the casting of Roland didn't really matter because the film bears only the slightest resemblance to any of the novels.  Clarisse Loughrey of The Independent put it best when she wrote that the film is "a dull disappointment without any set audience: incomprehensible to newbies, and wildly unfaithful and simplistic to fans of King's books".  There's no path of the beam.  Hell, there's no beam, other than the one that The Breakers (now kidnapped children instead of selfish men and women who took the job) shoot out of their heads from Algul Siento to attack the Tower directly.  Jake Chambers is just another kid they want to kidnap to work as a breaker.  The only thing he shares in common with the Jake from the book is the fact that he's a young boy from New York City.  Nearly everything else about the character has been changed, and we're left with a random generic kid.

It's not even worth discussing the rest of the ways that the film bastardized the novels.  Suffice to say that if you changed the name of the film and the names of two or three of the characters, I suspect few would have even guessed that the folks who wrote the movie have ever even read the books, let alone that the film is meant to be an adaptation of them.  Stephen King has attempted to justify these changes by saying that the film is a sequel to the books and another turn on ka's wheel, but that doesn't hold any water at all.  It's a completely unrelated, dull, Hollywood cookie-cutter story that, at best, has a handful of easter eggs that reference the works of Stephen King.