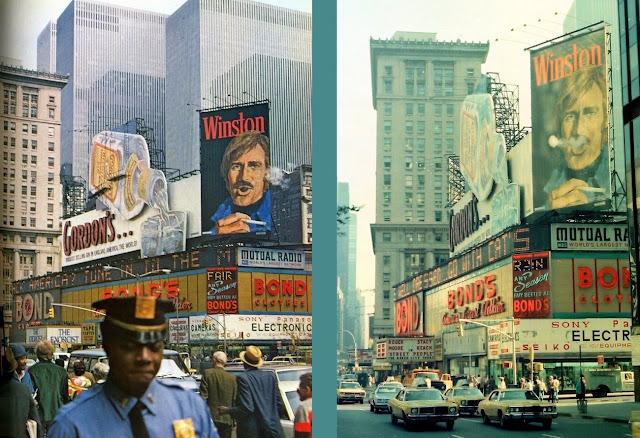 Winston Cigarettes Billboard
45th & Broadway - New York, NY
From 1972 to 1977, a Winston billboard of a smoker that puffed real smoke rings into the skies above Times Square stood at the top of the Bond's Clothing Store building.  The billboard had a steam-producing copper box behind the head of the man in the sign which generated 1,000 smoke rings per day over a period of five years.  According to the New York Times, it was taken down by the cigarette company in the Fall of 1977 for a combination of reasons, including the expense to the company to keep the sign in operation.
The movie theater marquee showing The Exorcist in the photo on the left makes it likely that it was taken in 1973.  It was shared by Vintage Everyday, and I believe it was scanned from a magazine, but the source was not provided by the website.  The photo on the right was taken in September 1976 and was shared by Blair Stirrett.  In this photo, you can see that the theater beneath the billboard is showing Street People, starring Roger Moore and Stacy Keach.