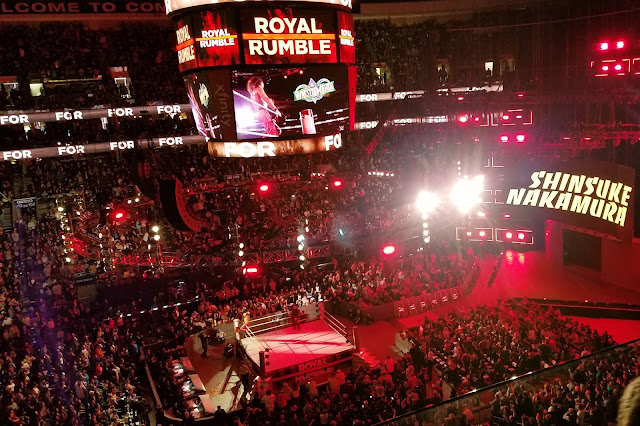 2018 WWE Royal Rumble
Wells Fargo Center - Philadelphia, PA
Photo Album - Ticket
I flew back to Philadelphia from El Paso and arrived just in time to see my first WWE pay-per-view event live, the 2018 Royal Rumble.  My phone's battery was pretty low so I didn't get to take as many photos as I usually do, but it didn't bother me too much.  The entire event is recorded for the WWE Network, so it's not like I'm going to forget what happened.

The night began with a taping of the final segment of the KFC Colonel Rumble commercial.  Rusev and The Miz battled in the ring for a few moments before Ric Flair, dressed as Colonel Sanders, came to the ring to win the "match" by eliminating both men.  It wasn't his 1992 appearance, but it was fun and I'll always be able to say I saw Ric Flair wrestle at the Royal Rumble.

Other than NXT and podcasts, I hadn't followed the product too closely in the months leading up to the Rumble, so I was a little shocked to see that Lince Dorado was a member of the roster.  I last saw him wrestle for Chikara.  He was a cool dude, and I was happy to see that he found a home on 205 Live.  I also popped pretty hard to see the original Bullet Club (Gallows and Anderson) and Bobby Roode on the pre-show, complete with his "Glorious" entrance to the ring.

The World Heavyweight Championship match was a bit disappointing.  I've been a fan of AJ Styles, Kevin Steen (Owens) and El Generico (Zayn) since their ROH days, but I would have strongly preferred to see a 1 on 1 match for the title instead of a gimmick match on a card full of gimmick matches.  It was a decent match, but it's hard to suspend disbelief and take it seriously when the premise is so goofy.  Frankly, I took the United States championship match on the pre-show more seriously.

The Universal Championship match was shorter than I expected, but it was a good, hard-hitting brawl with a lot of table spots.  Lesnar retained the title by giving his F5 finisher to Kane, so I imagine that they're setting up a "Battle of the Beast" feud between Lesnar and Strowman for Wrestlemania.  Knowing the company, they'll probably try to squeeze Roman Reigns in there - the "New Coke" of professional wrestling.  They're hell bent on trying to make him their modern day Hulkster despite the fact that he's been rejected in that role by virtually everyone in the audience over the age of 12.

I hate to be overly negative, but both the Raw and Smackdown Tag Team Championship match had disappointing writing ruin a good match.  They had an awesome team in Chad Gable and Jason Jordan in NXT, but instead of continuing with something that the fans enjoyed and accepted, they changed things for the sake of changing them by putting Gable with a returning Shelton Benjamin.  I guess they figured we'd never notice if they swapped one black guy for another?  Even more strange was the pairing Jason Jordan in an odd couple team with Seth Rollins.  Both tag team matches featured good wrestling, but the storyline was so awkward and pointless that I couldn't lose myself in it.  For both matches, all I could focus on is how good it could have been if one of the matches featured Gable and Jordan fighting for the titles.  WWE writers tend to outsmart themselves with complicated, soap opera plot twists resulting in forgettable matches that could have been memorable if they would only stick with what works.

The Rumble matches themselves were a breath of fresh air compared to recent years.  Shinsuke Nakamura eliminated Roman Reigns and announced that he will be facing AJ Styles for the title in the main event of Wrestlemania.  My first time seeing Nakamura was on NJPW Wrestle Kingdom 10 where he defeated AJ Styles to retain the IWGP Intercontinental Championship.  It was an amazing match, and I immediately became a fan of Nakamura and went back to watch his previous work.  He's one of the most athletic and charismatic performers I have ever seen, and the upcoming title match may end up being the greatest main event in the history of Wrestlemania.  The rest of the match was a lot of fun.  Heath Slater kept getting knocked out before he could enter the ring.  Bray Wyatt and "Broken" Matt Hardy had a confrontation.  Kofi Kingston had his annual elimination escape by standing on pancakes.  There were surprise entrances by Andrade "Cien" Almas, Adam Cole, The Hurricane, Rey Mysterio and Sami Zayn, who knocked out Tye Dillinger and took his spot in the match.  John Cena came in at #20 and wrestled in the match for almost a half hour before being eliminated by Nakamura.  Roman Reigns and Seth Rollins worked together throughout the match before Reigns eliminated Rollins with a shrug (which I'm sure the announcers highlighted with the ol' "every man for himself" line).  The Philly crowd not only did the countdown for each wrestler's entrance, but also loudly made the buzzer noise when a new wrestler came out.  It was one of the best Royal Rumble matches in recent memory, and I'm glad I was there to see it first hand.

The first ever Woman's Royal Rumble match was the main event of the show.  I didn't enjoy it as much as the Men's Royal Rumble, mostly because nearly a third of the participants were women who wrestled for the WWF/E between 5 - 10 years ago and were brought back for one night only as filler to bring the match up to 30 participants.  One or two surprises from the past are a fun part of the Royal Rumble, but when they have to resort to adding performs like Vickie Guerrero and Kelly Kelly to the mix, it's gotten out of hand.  It would have been a much better match if they had 20 wrestlers, but the company has gotten into the habit of doing the "first ever women's (insert match here)" just for the sake of doing it, whether it makes sense to do so or not.  Asuka had an awesome performance (as always), but the highlight came after the match.  The company's two women's champions, Charlotte Flair and Alexa Bliss, came to the ring.  Asuka was about to announce which of the two titles she would fight for at Wrestlemania when Bad Reputation by Joan Jett started blasting and "Rowdy" Ronda Rousey came to the ring.  It was rumored that she'd make her first appearance for the WWE in the weeks leading up to the Rumble.  She came to the ring in Roddy Piper gear to point at the Wrestlemania sign.  I'm guessing this means that Asuka will be fighting for one of the titles and Rousey will be fighting for the other one.