Gentleman Jim Is Going To Cooperstown 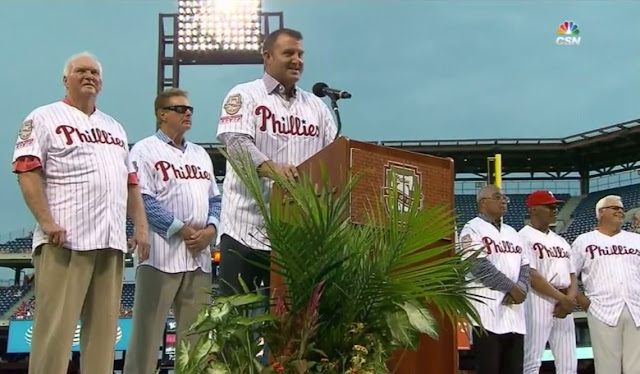 Jim Thome
2018 Baseball Hall Of Fame
With over 89% of the vote, one of the greatest first basemen and best human beings to ever play the game is officially a member of the National Baseball Hall of Fame.

Jim Thome will always be best known as a member of the Cleveland Indians, but he spent three and a half incredible years in Philadelphia.  He signed with the Phillies in December 2002 and was our first baseman in the last year of Veterans Stadium and the first year of Citizens Bank Park.  In his first season with the Phillies, he came within a single home run of tying the single season franchise record, and he hit his 400th career home run the following season. 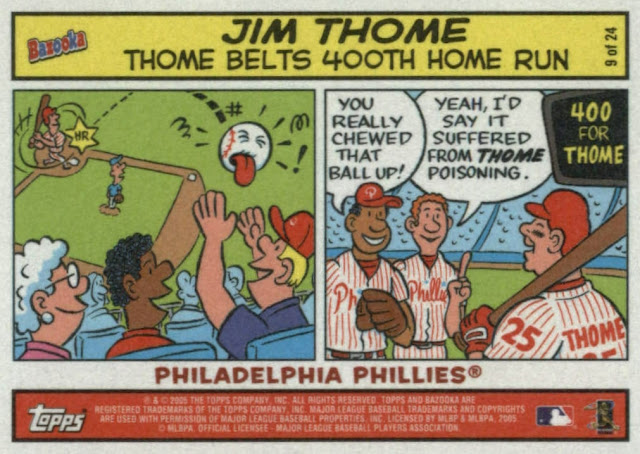 Thome's injuries in 2005 changed the course of Phillies history.  His time on the disabled list opened the door for a 25 year old prospect named Ryan Howard to get his first regular playing time at the big league level.  Howard would go on to bat .288 with 22 home runs in just 88 games and win the 2005 NL Rookie Of The Year award.

If the Phillies played in the American League, the Phillies could have moved Thome to the DH spot to make room for Howard at first base.  To this day, I still think about how incredible the 2006 Phillies would have been with a lineup that included Rollins, Utley, Abreu, Howard, Thome and Burrell.  Unfortunately, the National League does not have the designated hitter rule, so Thome was traded to the White Sox that winter.  As Chicago's DH, he bounced back from injury to hit 42 home runs in 2006 and topped 30 HR in each of the two following seasons with the White Sox.  The Phillies would go on to have their most successful run in franchise history, culminating in a 2008 World Series Championship.  Had the Phillies not traded him, 2008 would have been the last year of the six year contract that Thome signed after the 2002 season.  It would have been awesome to see him standing next to Ryan Howard in the parade down Broad Street.  There's every possibility it wouldn't have been their first, as it's easy to imagine Thome's offense being a difference maker that could have fueled a championship run for the Phillies in 2006 and 2007 as well. 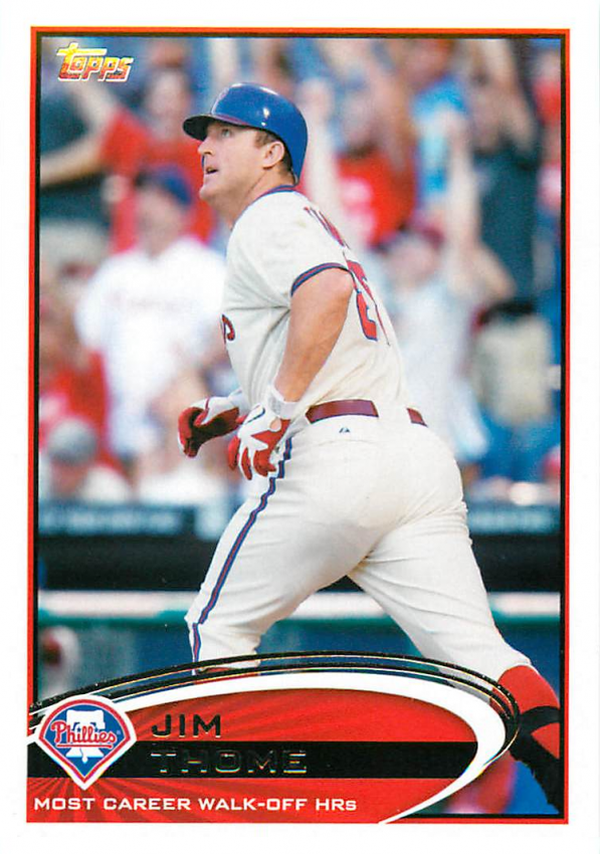 In the winter following the 2011 season, GM Ruben Amaro brought Jim Thome back to Philadelphia on a one year contact.  It was a bold move.  Thome was 41 years old and entering what would be the final year of his playing career.  He wasn't the offensive juggernaut that he once was, but I thought it was a brilliant move at the time, and I hold to that opinion today.  Ryan Howard tore his Achilles tendon in the final at bat of the 2011 NLDS and began the 2012 season on the disabled list.  Thome spent the winter preparing to play first base once or twice a week.  The idea was that he would split time with Ty Wigginton and John Mayberry Jr. at first base until Howard was healthy.  He would be available as a power bat off of the bench like Matt Stairs before him, and he could DH in interleague games in AL ballparks.  It was a good plan, and it brought an icon back to Philadelphia in the hopes that he would finish his career with a World Series ring.  Sadly, it did not work out that way for Thome or for the Phillies.  He would hit only five more home runs for the Phillies, but two of them were historic, and I was fortunate enough to be in attendance for one of them.

The first of Thome's historic home runs in the 2012 season happened in Toronto on June 17th.  Thome was the DH batting in the cleanup position behind Hunter Pence.  Thome led off the top of the 2nd with a deep home run to right center field to cut the Blue Jays lead in half.  It was his only hit that night, but it was his 100th career home run as a member of the Phillies.  He became only the fourth player in MLB history to have hit 100 homers for three different teams, having previously topped the 100 HR mark with the Indians and White Sox.  The only other players to have done this were Reggie Jackson, Darrell Evans and Alex Rodriguez.

The second home run I'm referring to came six nights later at Citizens Bank Park, and it's one of my favorite memories of any game I have ever attended.

The Phillies were playing the Tampa Bay Rays and were clinging to a 6-4 lead in the top of the 9th inning.  Jonathan Papelbon was brought in to close the game.  He gave up a single to Hideki Matsui and walked Jose Lobaton to put runners on first and second.  A two out single by Jeff Keppinger scored Matsui to narrow the lead to 6-5, which was followed up by a Brooks Conrad single to tie the game, earning Papelbon a blown save.  I was pretty disgusted at this point, so we headed toward Ashburn Alley to watch the rest of the game from the outfield and get a jump on the crowd after it was over.  I fully expected the Rays to take the lead, but Pabelbon managed to strike out Sean Rodriguez to finally end the inning. 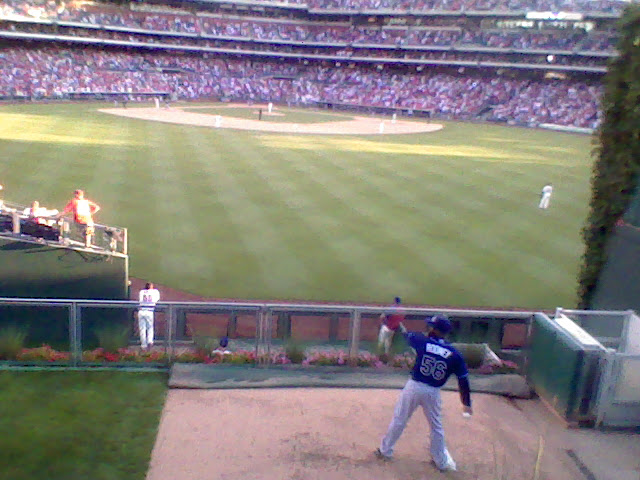 By this point, I was standing above the visitors bullpen.  Fernando Rodney had been warming up, but the Rays opted to stick with left hander Jake McGee who had a 1-2-3 bottom of the 8th inning, retiring Placido Polanco, John Mayberry Jr. and Michael Martinez on just 14 pitches.

With the pitchers spot due up for the Phillies to lead off the bottom of the 9th, Jim Thome came into the game to pinch hit.  He worked a full count against McGee, and smashed his 8th pitch of the at-bat into left field for a walk-off home run. 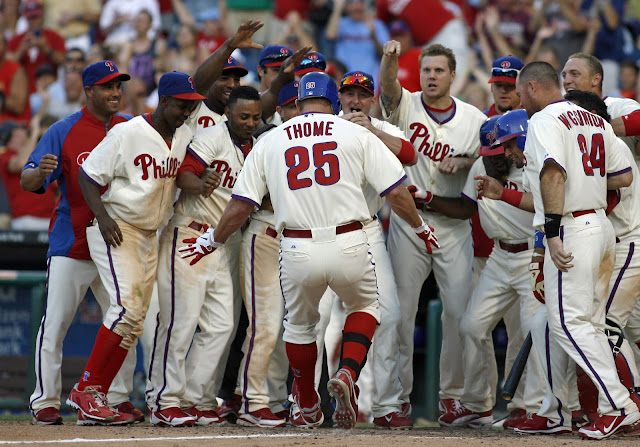 This home run was special for many reasons, some that were known at the time and some that we didn't.  It was Thome's 609th career home run, which tied Sammy Sosa for 7th most of all time.  It was his 13th career walk-off home run, which broke a tie he held with Babe Ruth, Mickey Mantle, Jimmie Foxx, Stan Musial and Frank Robinson to give him the most of all time.  The victory was also a milestone for Charlie Manual, as it gave him his 900th career win as a manager in the big leagues.  This historic homer was memorialized on card #152 of the 2012 Topps Update set.

What we did not know at the time was that this would be Thome's final National League home run, and his final homer as a member of the Philadelphia Phillies.  With the Phillies under .500 and fading out of contention, they traded Jim Thome to the Baltimore Orioles to give the aging slugger one last shot at a World Series Championship.  The Orioles made the playoffs, but were defeated by the Yankees in the 2012 ALDS. 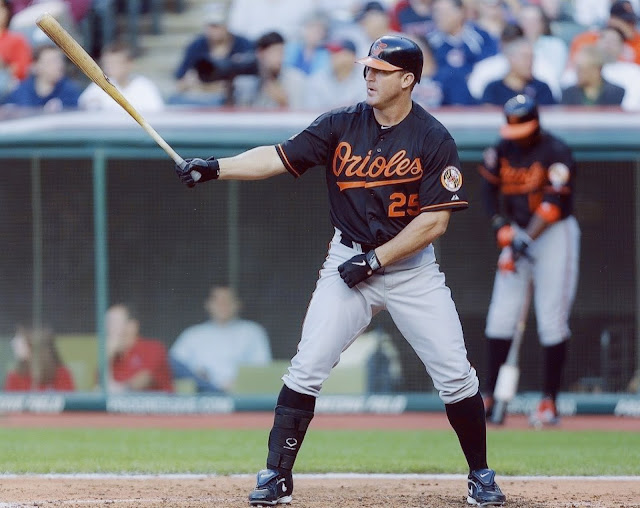 Thome would go on to hit three more homers for the Orioles to finish his career with 612 home runs.  When he retired from the game at the end of the 2012 season, there were only six players in the history of Major League Baseball to have hit more home runs: Barry Bonds, Hank Aaron, Babe Ruth, Alex Rodriguez, Willie Mays and former teammate, Ken Griffy Jr.

Congratulations to one of my favorite ballplayers ever to wear a Phillies uniform, or any other uniform for that matter.  You are truly one of the all-time greats and deserving of baseball's ultimate honor.  Welcome to the Hall Of Fame, sir.