Happy To Be At The Ballpark 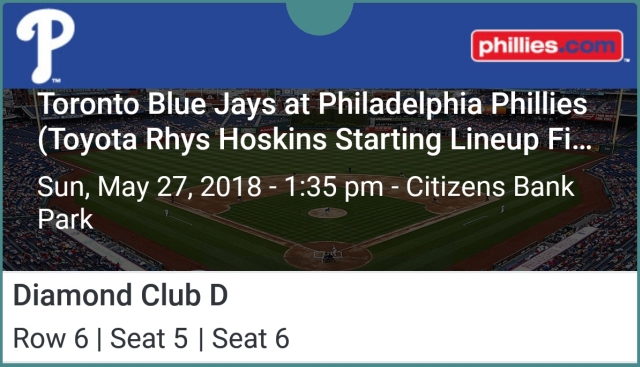 On July 29th, 2010, the Philadelphia Phillies traded J.A. Happ, Anthony Gose and Jonathan Villar to the Houston Astros for Roy Oswalt.  The Phillies had lost Jamie Moyer for the season to an injury, and the trade that brought Oswalt to join Roy Halladay, Cliff Lee, Cole Hamels and Joe Blanton was universally praised for creating one of the most talented pitching rotations in modern history.

Since leaving Philadelphia, Happ pitched for the Astros, Blue Jays, Mariners, Pirates, and finally back to the Blue Jays for the start of the 2016 season.  He won 20 games that year and has come into his own as one of the best pitchers in baseball.  He's faced the Phillies three times (2011, 2014 and 2016) and led his team to victory each time.  Happ made it a perfect 4-0 against his former team yesterday with the Blue Jays 5-3 victory over the Phillies.

Aaron Altherr and Nick Williams put the Phillies on the board with back to back RBI singles in the 6th inning, and Carlos Santana (pictured above) had a nice game, going 2-4 and scoring a run, but it wasn't enough for the Phillies to get the win.  On the strength of RBI doubles hit by Devon Travis in the 2nd and Dwight Smith in the 6th, the Blue Jays held the lead throughout the game.  A home run by Curtis Granderson in the top of the 9th capped off the Blue Jays 5 - 3 victory.