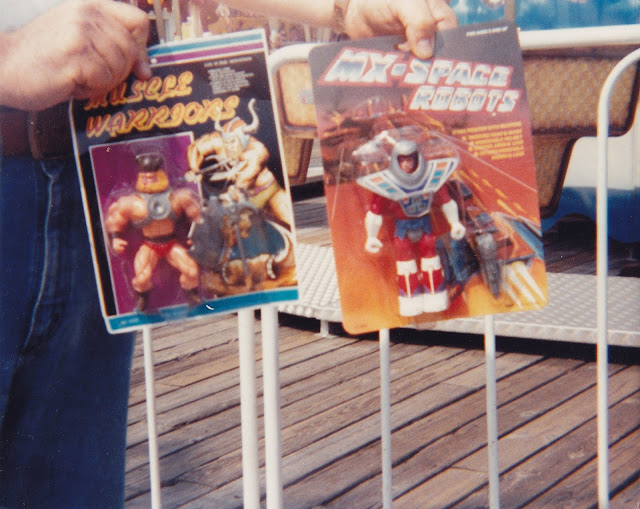 When I was a kid, the highlight of my year was our family vacation to Wildwood.  I got to spend three days with my dad and my grandparents riding the rides, playing the games, enjoying the ocean and the food and embracing all of the things that were great about childhood.

One of the things I looked forward to every year was going to the arcades on the Boardwalk.  Usually, I would see a dozen or more games for the first time, months before they came to my local Aladdin's Castle.  However, no matter what new game drew my attention, I always had some quarters set aside for Skee-Ball.  I loved playing the game, but I enjoyed saving up the tickets to redeem for prizes even more.

I snapped this photo in the summer of 1986.  Grandpa is holding two of the toys that I redeemed my Skee-Ball tickets for that year.  The action figure on the left is a knockoff He-Man/viking hybrid from a series of action figures called Muscle Warriors.  The toy on the right is one of the MX-Space Robots figures.  These were the bootleg toys that kids really didn't seem to want, but I enjoyed them very much and they got played with right alongside the "real" toys from KayBee Toys.

The irony is that while these toys were cheap prize ticket items that probably sold for a dollar or less in the 80's, the loose figures from these lines frequently sell for over $50 each on eBay, and unopened figures are even more expensive.  At the time of this writing, the "Hulk" toy on the left was included in a lot of others from the series for over $200.  The figure on the right, which is apparently called "Colonel Stan", was available loose, and in poor condition, for $65.  You can learn more about these, and other loved bootleg toys from the past at Knock-off Collector.