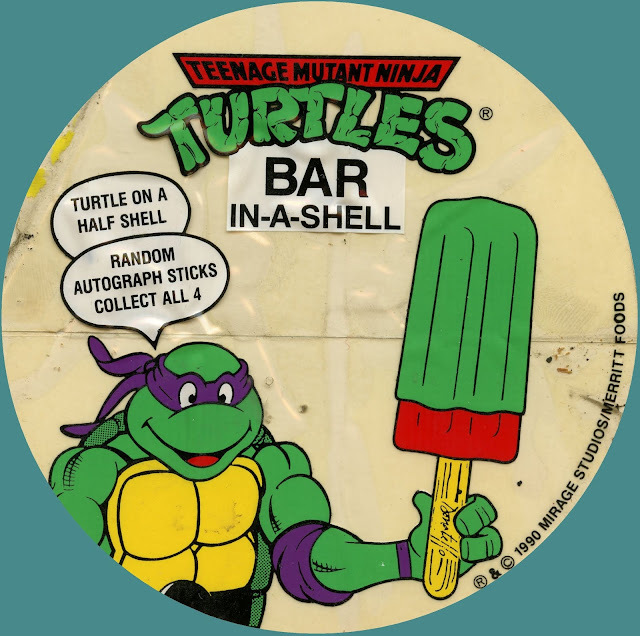 Teenage Mutant Ninja Turtles Bar In A Shell
Cherry Flavored Water Ice - Merritt Foods (1990)
I bought this sticker for a buck at a flea market.  It's a decal that was used on the freezer door at grocery stores to promote a TMNT branded frozen dessert back in 1990 at the height of the Ninja Turtle craze.

I've had plenty of Turtle-branded snacks when I was a kid (the Hostess Pies were my favorite), but I don't think I ever had this one.  I'm sure I would have enjoyed it, but if my family let me pick a frozen treat at the grocery store, I was going for ice cream, not Italian Ice.

These frozen desserts were a cherry red Italian Ice product with a thin green shell.  I don't see a mention of any other flavor on the box, so I can only assume that the shell is also cherry flavored.  In addition to the turtle green shell, the product had a lot of other fun goodies going for it.  The back of the box had a sign that could be cut out and hung onto a doorknob, and each stick was embossed with an "autograph" from either Leonardo, Donatello, Michelangelo or Raphael.

Autographed collectible sticks must have been a trend in the ice cream industry in 1990.  The TMNT Bar In A Shell products were manufactured by Merritt Foods - the makers of the Bomb Pop.  In the same year, rival frozen dessert producer Good Humor sold a line of Big League Baseball Ice Cream Bars, which featured a series of 26 bat shaped sticks that featured the embossed autograph of a player.  The main difference between the two is the placement of the autograph. The TMNT bars feature the autograph at the bottom of the stick whereas the autograph on the baseball sticks were hidden by the ice cream, so you didn't know which player you got until you finished eating.

I'm not sure how long these were produced, but I would guess that they were available for about two years.  Instagram user TMNTOhio84 has several photos from this product, including a different cooler decal than the one I found.  This variation has a "Taste The Ooze" bubble added to the center, which leads me to believe that it may have been produced in 1991 in conjunction with the theatrical release of Teenage Mutant Ninja Turtles II: The Secret Of The Ooze.