Universal Studios: Hollywood Movie Magic game piece
West Coast Video (1992)
This game piece was discovered in a box of random ephemera that was being sold at the flea market.  I think I paid a dime for it.  It was part of a contest that was being held by West Coast Video in the early 90's.  If you collected all five game pieces, you would win a trip to Universal Studios Hollywood in California.  This game piece features Fievel and represents the park attraction that's themed around An American Tail.  Evidently, this game piece was also an instant winner of a Level #5 prize.  I haven't been able to find any information on about this contest, so I guess it could have been anything from a free movie rental to a trip to Hollywood.  These days, it's not good for much other than a small piece of video rental nostalgia from the 90's.  The West Coast Video chain went out of business in 2009. 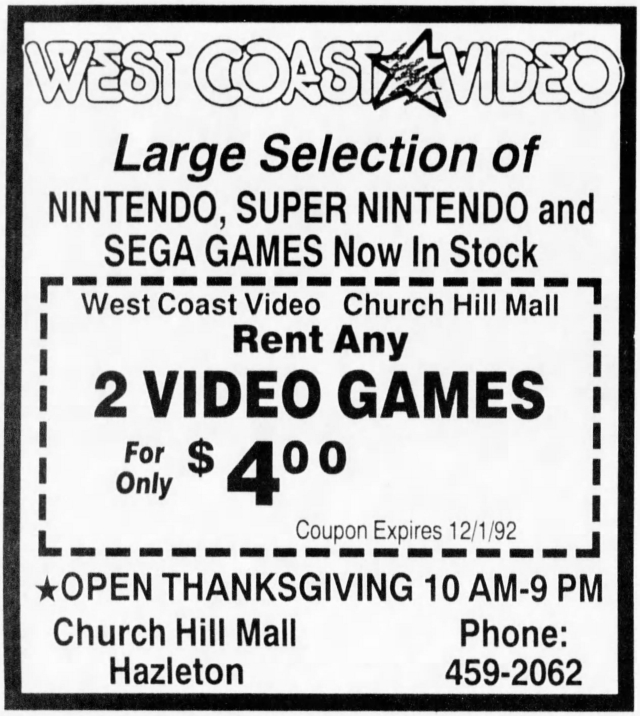 I don't remember this particular game, and although I enjoyed the first American Tail film, it's not among my favorites.  I still haven't seen any of the sequels.  I mostly picked this up because it was from West Coast Video.  These days, there's a lot of nostalgia for Blockbuster Video, but they weren't the only game in town back in the 80's and 90's.  Hazleton is not a big city and there were at least 20 different places to rent movies within a few miles of my house.  When you count all of the mini marts and grocery stores that rented tapes, it's was probably closer to 30.  Among these were two or three West Coast Video locations.  They were less expensive than Blockbuster, and they frequently had coupons in the paper, so Grandpa naturally wanted to go there any time we went out to rent a movie.  I remember when the Teenage Mutant Ninja Turtles move came out on VHS, I was insistent that Blockbuster was the only place in town that would have it.  Grandpa said that we should check out West Coast Video first.  I protested for the whole drive there that I was sure they wouldn't have it.  I have no idea why - maybe I saw a commercial or something.  When we walked into the West Coast Video at the Church Hill Mall, there was a display right near the door with at least 20 copies of TMNT available to rent.  Grandpa laughed his butt off and spent the next few weeks busting my chops about how sure I was that they'd never, ever have it in stock.