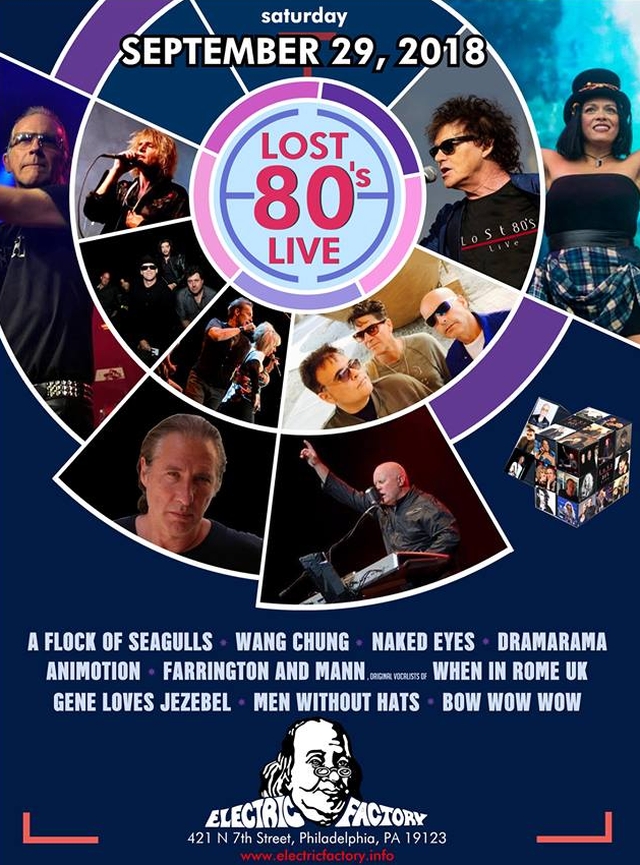 Lost 80's Live
A Flock of Seagulls / Wang Chung / Naked Eyes / Bow Wow Wow
When In Rome / Animotion / Gene Loves Jezebel / Dramarama
Philadelphia, PA - September 29, 2018
Photo Album - Ticket
This was one of the best 80's shows I've ever been to.  Gene Loves Jezebel hit the stage first.  To be honest, I've never heard of them before today, but they had a lot of energy and I enjoyed their music.

Annabella Lwin performed next.  She was 15 when she was the became a star as the singer of Bow Wow Wow.  Today, she sounds just as good as ever.

Dramarama was the third band to come out with lead singer John Easdale carrying a case of Tab and drinking the soda throughout their set.  I didn't know much about them except for the song "Anything, Anything" from A Nightmare On Elm Street 4.  They performed it as their closer, and it was incredible.

Naked Eyes was next, and Pete Byrne sang and played two of my favorite new wave songs: Promises, Promises and Always Something There To Remind Me.  Both were definitely bucket list songs to see in concert.

Animotion came out fifth.  They owned the stage and performed Let Him Go and Obsession, and they did a pretty incredible cover of Soft Cell's Tainted Love.

When In Rome was the sixth group to perform.  They did a short set, but it included one of my favorite songs, The Promise.

Wang Chung was absolutely fantastic!  Nick Feldman came out wearing a "Wang Chung Is F*cking Metal" t-shirt, which set the tone for their set.  They opened with Let's Go and followed it up with To Live & Die In LA and Dance Hall Days.  The drummer then came out to do a cover of Girls Just Wanna Have Fun which smoothly transitioned into Everybody Have Fun Tonight.

The headliner was A Flock Of Seagulls.  They have long been one of my favorite new wave groups, and they have some of my favorite songs overall.  They opened with Modern Love Is Automatic and The More You Live, The More You Love.  Next was Telecommunication, and at around that point, the guys from When In Rome and Wang Chung came out to watch the show and take photos of Mike Score.  Next, they did one of my all time favorite songs, Space Age Love song.  They closed with Wishing and with an amazing performance of I Ran.

This was a phenomenal night of music that capped off a week where we got to see a dozen 80's artists.  I'm very thankful that we had the opportunity to go to these shows.