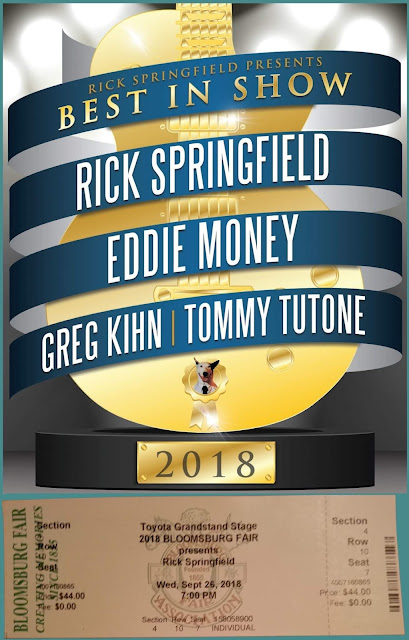 Rick Springfield / Eddie Money / Greg Kihn / Tommy Tutone
Best In Show Tour
Bloomsburg, PA - September 26, 2018
Photo Album - Ticket
The Bloomsburg Fair is one of my favorite things in the world.  I look forward to it like a child looks forward to Christmas, and I've been to it nearly every year of my life.  Despite this, I've never been to a concert at the Fair.  Their shows are almost all country music acts, and that has never been something that I'm interested in.  This year, I am incredibly happy to say that we've gotten four icons of 80's pop rock, and I've been to my first Bloomsburg Fair concert.

The concert was held on the race track at the fair, and it rained for over an hour before the show the walk to our seats was quite muddy.  Thankfully, it stopped raining right before Tommy Tutone began, and the folks in charge of the show covered the floor seating ground with sand, so instead of being a mess, the ground had a spongy foam consistency.  The chairs sank into the ground a bit, but that was the worst that could be said for the impact the rain had on the show.

Everyone was incredible and performed the hits we were expecting, along with a few nice surprises.  One of the most pleasant surprises of the night was Tommy Tutone covering Jim Croce's "Operator", but performing it as if it was a song by The Clash.  It was a very interesting concept and it sounded great!  Greg Kihn opened "Our Love's In Jeopardy" with a shout out to Weird Al and the fact that this song put his two kids through college.

Speaking of kids, Eddie Money has an awesome Partridge Family vibe going on with this tour.  Two of his sons and his daughter are in the band: Julian is on drums, Dez plays guitar, and Jesse sings backup vocals (and she does the female vocals in "Take Me Home Tonight").  Money told stories and jokes throughout the show and was funny as hell.  He also mentioned that his aunt and uncle are from Bloomsburg and were in the crowd, and that parts of this show would be featured in his reality show, Real Money on Axis TV.

While I was looking forward to seeing Eddie Money the most, Rick Springfield really blew me away with his performance.  Watching this show, I thought the dude might be a 45 year old guy who looks young for his age.  As we were leaving, I overheard a woman say that she couldn't believe he was 69 years old.  I thought for sure that she was mistaken, but no.  He is 69 years old, and he runs around the stage and performs like he was half his age.  He did a montage of his hits, including a brief teaser where he performed a few seconds of 867-5309, joking that everyone thinks that was his song, but it's Tommy Tutone's.  He did all of the hits you would expect, including an incredible performance of Jesse's Girl, and the stuff from his new album was pretty damn good too.  The Voodoo House was an especially great rock song.  I left the show with a whole new level of respect for Rick Springfield as a rock star, and I think anyone who has the opportunity to see him perform live will feel the same.