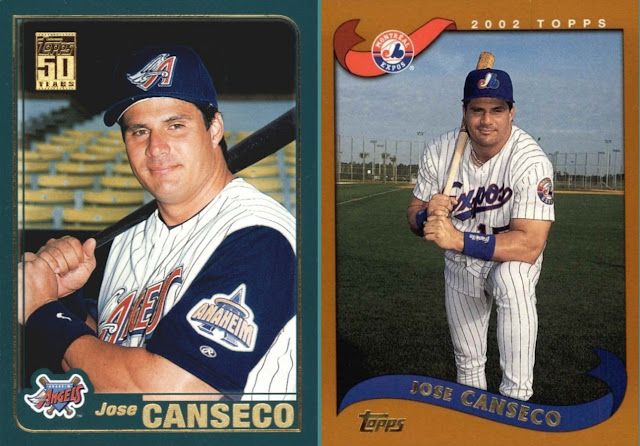 Jose Canseco
2001 Topps - Anaheim Angels
2002 Topps - Montreal Expos
Thirty-three years ago today, Jose Canseco made his major league debut for the Oakland A's.  Throughout most of my childhood in the 80's and early 90's, he was one of the players that was universally loved.  When we bought a pack of baseball cards at Pantry Quick, Canseco was one of the players we were hoping to find inside.

Personally, I feel that his decision to blow the whistle on the steroid culture of the game has been a service to the game and its fans, but I recognize that I'm in the minority.  Canseco is far from being universally loved these days, even from fans and sportswriters who are all to eager to forgive other steroid users when the Hall of Fame ballots are passed out.  However, even his most vocal critics have to admit that his career was not boring.  Take, for example, these two baseball cards.

On the surface, there's nothing remarkable about either of these cards.  They're not rare or especially valuable.  They're interesting in that Jose Canseco never appeared in a major league game for either the Angels or Expos in his career.  He was cut from the Angels during Spring Training and split the 2001 season between the Newark Bears and Chicago White Sox, and he was cut by the Expos before Opening Day in 2002 before returning to the White Sox organization, appearing in 18 games for the Charlotte Knights.  In both cases, the cards were produced and waiting to be found in packs before the start of the season.

These aren't the only examples of players appearing on cards for teams that they never played for, but there can't be too many who have done so for two seasons in a row.  Dime Boxes, a fantastic blog that highlights the fun of baseball card collecting, has a section called The Zero-Year Club that covers cards like these.  It's a great way to enjoy the hobby without breaking the bank.