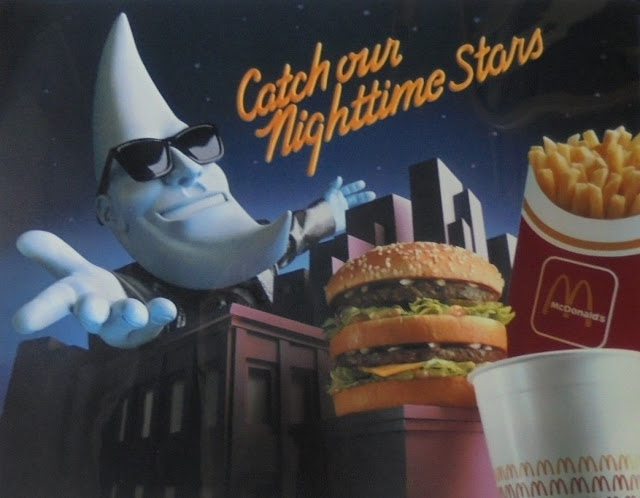 Mac Tonight
McDonalds (1987)
Two things that I have an appreciation for are clever advertising and things from my childhood in the 80's and 90's.  At the top of my list of things that I've always had warm, nostalgic feelings for is the McDonald's mascot Mac Tonight.

I can't really explain why, but I loved Mac Tonight when I was a kid.  He was much cooler than Ronald or any of the McDonald Land gang.  For a few years, he popped up everywhere.  He appeared at the Funfest parade in Hazleton.  There was a Mac Tonight commercial on my VHS tape of the pilot episode of Duck Tales.  There were Happy Meal toys, t-shirts and all sorts of other merchandise that featured the character, and I've spent the past 20 years collecting much of it.  I even managed to find a translite sign from the McDonalds menu boards.  In the late 90's, my grandfather and I built a light box for it that gives the image the 3-D effect that it had in the restaurant.  It's still hanging in my house to this day, and it's a cherished memory not only of a character from my childhood, but a fun project that I worked on with my Grandpa, many years before he passed away.

With all this said, it saddens me to learn that a parody version of this character has been used to promote racism.  The association it now has with horrible images and hate speech upsets me more than I could put into words in this blog.

When you see Mac Tonight on my little blog, please know that it has nothing whatsoever to do with anything negative.  It's a character that I've loved since I was six years old, and I'll be damned if I'm going to allow my happy memories of it to be overshadowed by horrible people saying horrible things.