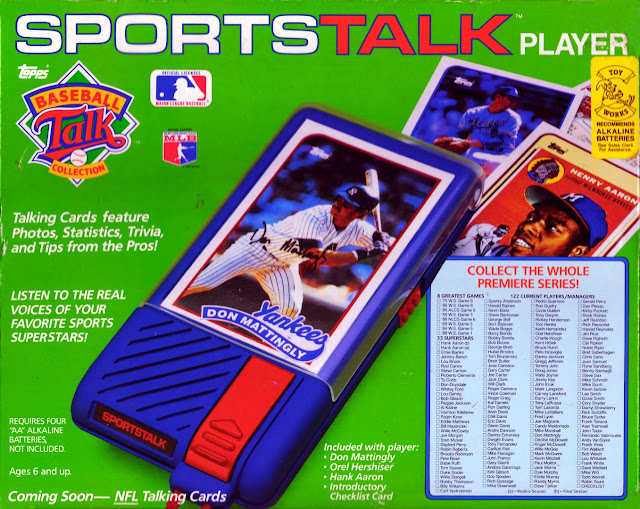 Sportstalk Baseball
Topps / LJN Toys (1989)
This came out when I was nine years old and I thought it was the coolest thing I had ever seen.  Talking baseball cards?  Sign me up!

Sportstalk Baseball was a lot of fun.  It was basically a mini custom record player that ran on two AA batteries.  It played small, plastic records that were glued to the back of special 1989 Topps baseball cards that came in four packs.  The cards were slightly smaller than a postcard and featured different photos than the ones used for the typical 1989 Topps set, and the record featured a two minute audio recording of Don Drysdale, Joe Torre or Mel Allen speaking about the player.  Some of the cards also included clips of interviews with the player themselves and radio broadcast clips from games.

It was an incredible idea for its time, but the players were prone to breaking and the toy line was discontinued within its first year.  These days, you can find unopened packs of cards on eBay pretty easily but it's a bit harder to find a working player.  I'm lucky enough to have a working player and I was in the process of recording the audio of the cards I have to share on here, but Clyde's Stale Cards beat me to it by several years with this incredible video playlist of nearly every card in the set.  Below is his video of one of my all-time favorite players, John Kruk.